This 19 February 2020 shows a black guillemot in the North Sea off the Dutch coast.

Black guillemots are rare off the Dutch coast. If they are seen, they are usually in winter plumage with lots of white feathers.

However, the one in this video is in summer plumage, almost all black.

This 22 September 2019 WWF video says about itself (translated from Dutch):

For the first time in the history of the oysters released in our North Sea, offspring has been found. Four “baby” oysters born in the North Sea were discovered earlier this month during a diving expedition by Stichting Duik de Noordzee Schoon. In addition to these offspring, the adult and “adolescent” specimens are also doing very well.

European flat oysters (Ostrea edulis) had being practically extinct for almost a century. This is an encouraging sign.

This 5 August 2019 video is about a deep-sea coldwater coral reef in the Rockall through in the North Sea.

This October 2018 video shows a curled octopus in the North Sea, about 8 kilometer off the Callantsoog coast in the Netherlands.

This is the first time ever that species was filmed in Dutch waters.

This 2011 video is about Patella sp. and Ostrea edulis oyster, along the coast of Brittany in France.

Return of the native facilitated by the invasive? Population composition, substrate preferences and epibenthic species richness of a recently discovered shellfish reef with native European flat oysters (Ostrea edulis) in the North Sea

After being ecologically extinct for almost a century, the discovery of a shellfish reef with native European flat oysters (Ostrea edulis) in the Dutch coastal area of the North Sea by the authors of this study called for an extensive survey to better understand some of the key requirements for the return of the native oyster in coastal waters. We assessed habitat conditions, its potential for increasing biodiversity, and the role of substrate provision by other bivalves such as the invasive alien Pacific oyster (Crassostrea gigas). Using underwater visual census, O. edulis size-frequency distributions and attachment substrate was investigated, as well as the composition of the epibenthic community and substrata types inside quadrats that were distributed across the reef. This reef was found to be composed of native European flat oysters, invasive alien Pacific oysters and blue mussels (Mytilus edulis), alternated with sandy patches.

The O. edulis population (6.8 ± 0.6 oysters m−2) consisted of individuals of different size classes. In quadrats with native and non-native oysters the number of epibenthic species was 60% higher compared to adjacent sand patches within the reef.

Notably, our results showed that the native oyster predominantly used shell (fragments) of the invasive Pacific oyster as settlement substrate (81% of individuals). Our results optimistically show that conditions for native oyster restoration can be suitable at a local scale in the coastal North Sea area and suggest that the return of native oysters may be facilitated by novel substrate provided by invasive oysters at sites where their distribution overlap.

Shellfish like oysters and mussels have the potential to revolutionize human health research, according to a new article. The study reveals how using bivalves as model organisms offers numerous promising avenues for medical research — from pharmaceutical development to bone regeneration: here.

This is a thicklip grey mullet video.

These fish live in the Atlantic ocean, including, eg, the North Sea.

From the Alfred Wegener Institute, Helmholtz Centre for Polar and Marine Research in Germany:

New species in the North Sea

Experts from the Alfred Wegener Institute and the Universities of Oldenburg and Potsdam, Germany have confirmed the existence of a new cryptic amphipod species in the North Sea. For the first time for the description of a new species, they used a level of mitogenomic information, which was normally applied in other areas of genetics. The discovery of Epimeria frankei was now published in the journal Scientific Reports. In the future, this level of molecular information could revolutionise biodiversity research.

Reports of “new species” in the North Sea, usually relate to animals or algae that were newly introduced by human activities. The discovery of a new amphipod species is proof that there are still unknown organisms lurking in the German Bight. A team of scientists around Dr Jan Beermann from the Alfred Wegener Institute, Helmholtz Centre for Polar and Marine Research (AWI) and Dr Michael J. Raupach from the University of Oldenburg, as well as colleagues from the University of Potsdam, now successfully discovered and described a previously overlooked species in the North Sea — a rare event, considering that the region is one of the best-studied seas in the world.

In the first place, AWI ecologist Beermann and Michael Raupach from the University of Oldenburg analysed so-called “DNA barcodes” of North Sea crustaceans: small genetic sequences that are a common tool in modern biodiversity research. Scientists create molecular libraries with these barcodes in order to simplify the identification of species. When Beermann and Raupach analysed their data, the researchers began to wonder whether they were dealing with only one, but two different species. “Once we had a closer look, we noticed that, for instance, some animals exhibited more pointed plates on their legs than others, but these subtle differences aren’t always easy to detect”, reports Beermann.

“The moment you realise that you’ve probably discovered a new species is fascinating and incredibly exciting. The North Sea isn’t the first place you’d expect to stumble across an unknown species — especially in a genus, which is comparably large in the North Sea with a body length of up to three centimetres, and which eye-catching colourations have also attracted the attention of earlier generations of researchers,” says Jan Beermann. The new Epimeria species was named Epimeria frankei, after Prof. Heinz-Dieter Franke, an ecologist who worked for many years at the AWI marine station at Helgoland, and who was Jan Beermann’s PhD mentor.

With the discovery and the availability of extensive information on the two species, both species had to be newly described. “In this regard we wanted to prepare species descriptions that weren’t restricted to the physical appearance but also include detailed genomic information,” explains Michael Raupach from the University of Oldenburg. “A few years ago, this would have been an extremely time-consuming. But nowadays, modern technologies make the analyses much faster and easier.”

For the descriptions, the scientists made use of the entire mitochondrial genome, using state-of-the-art decoding methodologies. In collaboration with the Genomics Team of Prof Michael Hofreiter from the University of Potsdam, they sequenced the genome with cutting-edge technologies. Classifying the importance of their work, Hofreiter and Raupach conclude: “We are the first team in the world to analyse the complete genetic material of the mitochondria, base pair by base pair, in the context of a species description.”

From the first indication to the confirmation that they truly detected a previously undiscovered amphipod species, it took the researchers more than six years. They were originally investigating the species Epimeria cornigera when they took notice of its sister species. Until then, Epimeria cornigera was commonly assumed to occur from the Mediterranean Sea to Iceland — a quite broad but possible distribution. Nevertheless, reliable information on the species’ biology was still scarce. As Jan Beermann explains, “We now know that the new species, Epimeria frankei, ranges from the Mediterranean to the North Sea, whereas the old species, Epimeria cornigera, is more restricted to the northern North Atlantic. There is a small area of overlap in the North Sea were both species can be found.” With the addition of E. frankei, the number of known Epimeria species in the north-eastern Atlantic increased to a total of five species.

This new discovery underlines that, even today, marine biodiversity can still be underestimated and that molecular methods have become an indispensable tool for modern biodiversity research. For their publication, the researchers combined various molecular genetic and morphological methods to a so-called integrated taxonomic approach (“taxonomics”). The authors are convinced that: “The successful validation of this approach confirms that, for future biodiversity research, taxonomics could also prove to be extremely important for further considerations such as marine conservation.”

Scientists studying gribble — a curious wood-eating crustacean — have discovered how they are able to digest wood despite being the only known animal to have a sterile digestive system. The discovery may help to develop cheaper and more sustainable tools for converting wood into biofuel in the future: here.

This video is about the greater weever fish, Trachinus draco.

They live in the North Sea, the Atlantic ocean and the Mediterranean.

This video was made this week on the North Sea, on fishing ship HD 36 from Den Helder in the Netherlands.

Thousands of starlings had landed on the ship.

That also meant much starling shit on the ship.

Fortunately for the crew, later that day it rained, so they did not have to do that much cleaning. 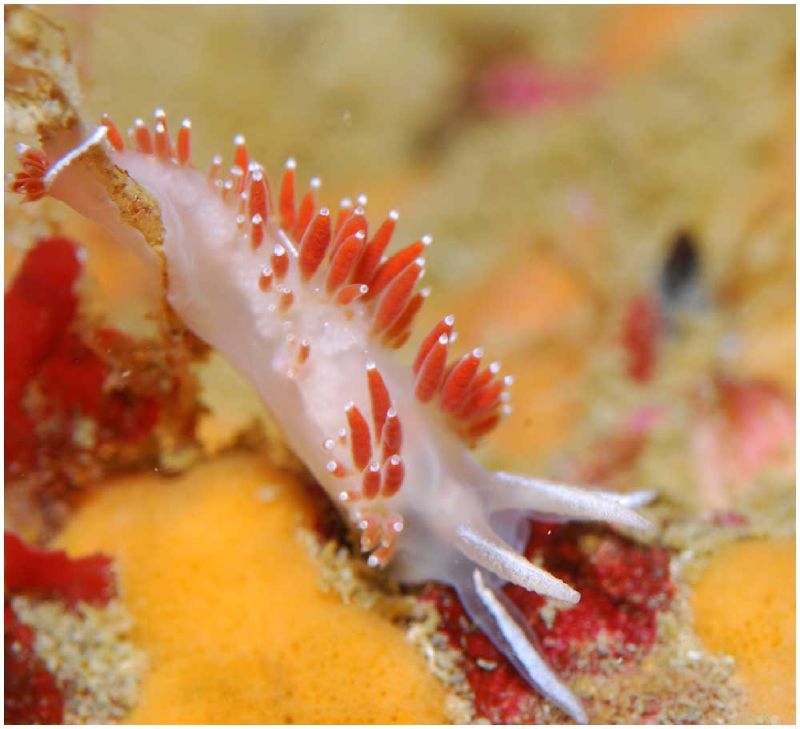 They are Flabellina verrucosa and Tenellia viridis.