Brazil‘s Senate has opened an inquiry into President Jair Bolsonaro’s government handling of the pandemic as the country reports nearly 400,000 deaths from coronavirus this week.

Bolsonaro has repeatedly downplayed COVID-19’s seriousness, railed against lockdowns and presided over an inept vaccination campaign.

Brazil has the world’s second-highest death toll from the virus after the United States.

The probe could hurt the president‘s chances of being re-elected in next year’s polls.

BOLSONARO’S OWN VERSION OF JAN. 6 FEELS INEVITABLE Brazil’s far-right president, Jair Bolsonaro, is following Trump’s playbook to undermine 2022 elections. And he’s working hard to secure the military support Trump lacked, writes Travis Waldron. An actual military coup remains an unlikely scenario, analysts said, but there are fears that significant numbers of police could back Bolsonaro no matter what. [HuffPost]

INDIA’S COVID-19 DEATH TOLL TOPS 200,000 India reported a single-day record 3,293 COVID-19 deaths in the last 24 hours, bringing the country’s total fatalities to 201,187, as the world’s second-most populous country endures its darkest chapter of the pandemic yet. The surge of new infections is tearing through dense cities and rural areas alike and overwhelming the health care system. [AP]

COVID-19 can affect the brain. New clues hint at how. Anxiety, depression and strokes can occur after infection, leaving experts to determine how the virus affects the brain: here.

From daily The Morning Star in Britain, 22 November 2020:

THE funeral of a black man beaten to death by supermarket security guards on the eve of Brazil’s Black Awareness Day was accompanied by anti-racist demonstrations across the country at the weekend.

Joao Alberto Silveira Freitas, a father of four, was buried on Saturday in the southern city of Porto Alegre in a coffin draped in the blue and white chequers of the Gremio football team.

“I just want justice,” his partner, Milena Borges Alves, told Brazilian media. “That’s all. I just want them to pay for what they did to him.”

She said they had planned to formally marry in a few days after living together for nine.

One of the guards is then seen kneeling on Mr Freitas’s neck.

Demonstrators enraged by Mr Freitas’s death painted “Black Lives Matter” on the pavement of Paulista Avenue, one of the most famous thoroughfares in Sao Paulo.

Military police used pepper spray to disperse protesters outside a supermarket in the north-eastern city of Recife.

In a video message to the G20 summit in Saudi Arabia, Brazil’s far-right President Jair Bolsonaro denied that his country suffered from racism and complained of an unspecified movement seeking to “divide” Brazilians.

Black and mixed-race people account for about 57 per cent of Brazil’s population but 74 per cent of victims of lethal violence, according to the Brazilian Forum on Public Safety, a non-governmental organisation.

This figure is even higher, 79 per cent, for those killed by police.

This 21 September 2020 video is about a jabiru stork couple at their nest in Brazil. 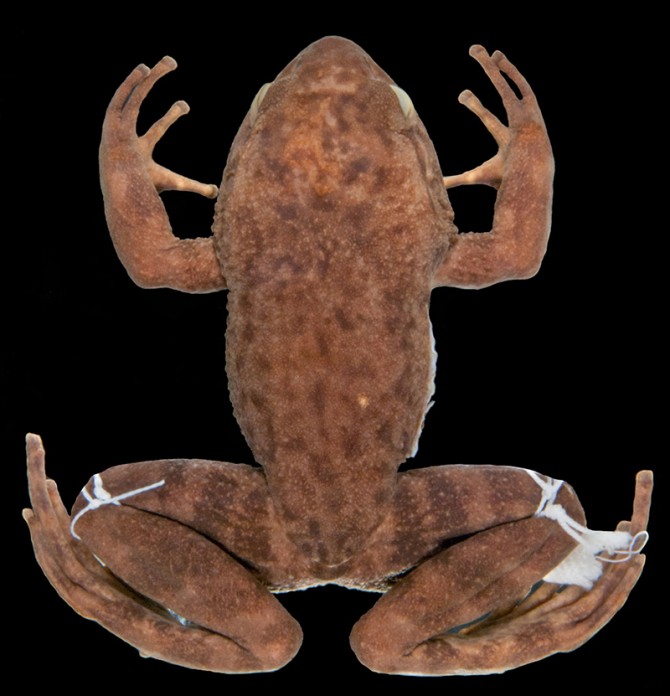 Scientists have detected signs of a frog listed extinct and not seen since 1968, using an innovative technique to locate declining and missing species in two regions of Brazil.

The frog, Megaelosia bocainensis, was among seven total species — including four other declining species, and two that had disappeared locally for many years — that were detected. The findings appeared in a paper, “Lost and Found: Frogs in a Biodiversity Hotspot Rediscovered with Environmental DNA,” published in August in Molecular Ecology.

Megaelosia bocainensis. A disappeared species from Parque Nacional da Serra da Bocaina, Brazil, known only from this museum specimen collected in 1968, and detected by eDNA surveys. In the study, the researchers collected and screened environmental DNA (eDNA) in the biodiverse Atlantic Coastal Forest and Cerrado grasslands of Brazil.

The eDNA technique offers a way to survey that can confirm the presence of species undetected by traditional methods, providing a tool for conservation scientists to evaluate the presence of threatened species, especially those with low population densities and those not seen in years.

After careful research to identify species at various levels of threat in these regions of Brazil, the researchers used the eDNA method to search for 30 target amphibian species in six localities where the frogs were known to previously live.

“Little bits of DNA in the environment don’t tell us about how many individuals there are or whether those individuals are healthy, but it does tell us that the species is still present,” said senior author Kelly Zamudio, the Goldwin Smith Professor of Ecology and Evolutionary Biology in the College of Arts and Sciences.

“This is one more kind of survey data, and for species that are declining or locally disappeared, it not only means they are there, but there’s now the potential to study them in more detail,” she said, noting that for many species, very little is known.

Around the world, conservationists have been challenged to keep pace with declining and disappearing amphibians. At the same time, living organisms leave DNA traces in the soil, water and air. Now, scientists are increasingly using highly sensitive sampling techniques to detect eDNA for conservation purposes.

The researchers hiked into the sampling sites carrying battery packs, a shoebox-sized peristaltic pump and backpacks of sterile tubing. They used the pump and tubing to draw up to 60 liters of stream or pond water through a capsule fitted with a filter for capturing DNA. A buffer was then applied to stabilize and preserve the DNA on the filter.

Back in the lab, the researchers extracted the DNA, genetically sequenced it, weeded out genetic material from humans, pigs, chickens and other organisms until they could isolate all the frog DNA.

“Now you’ve got a subset of genetic sequences that we know only belong to frogs, and then it’s step by step, going finer and finer, until you get to the genus and species you are looking for,” Zamudio said.

“We know there’s a Megaelosia there,” Zamudio said, “we just don’t know which one it is, but the only one that has ever been reported there historically is the one that went missing. Do we believe it? That’s how far the analysis can take us.”

Zamudio added that samples from nearby areas may be worth collecting for more signs of M. bocainensis.

The Brazilian National Council for Scientific and Technological Development and the São Paulo Research Foundation funded the study.

An escalating death toll and soaring infection rates have made Brazil one of the most virus-affected countries in the world.

Its president Jair Bolsonaro was out and about yesterday without a mask, hugging supporters, despite the rising numbers.

Coronavirus has been found on a sample of chicken wings imported from Brazil, authorities in the Chinese city of Shenzhen report. Residents of the city are advised to exercise caution when purchasing frozen food products.

The virus was found on the meat. It was previously found by China on boxes of Ecuadorian frozen shrimp.

This 16 May 2019 Portuguese language video from Brazil says about itself (translated):

History professor José Rodrigues Mao Júnior, lead singer of the punk band Garotos Podres, had a coffee with journalist Fred Melo Paiva. They talked about the controversy of the Dead Kennedys poster, about politics and Bolsonaro.

A resident of São Bernardo (São Paolo region), [leftist ex-president] Lula’s political birthplace, Mao thinks that the ex-president will only get out of jail with the people on the streets. “Bolsonaro managed to turn Lula into a hero, in the sense of Greek mythology.”

The legendary singer credits the revival of punk in the São Paolo region to the “barbarism” of Bolsonaro. “Nothing is more invigorating,” he says, “than having a cause to fight for.”

Now, after Bolsonaro’s Amazon rainforest wildfires and his anti-science coronavirus policies, leading to massive disaster, there is more reason than ever to rock against Bolsonaro.

Punk’s not dead — this 10-year-old drummer gives it life.

Brazil has the second-highest coronavirus death rate in the world, after the United States. VICE News’ Seb Walker traveled from Rio de Janeiro to the remote regions of the Amazon to show the impact of COVID-19 and government inaction on some of Brazil’s most vulnerable populations.

Brazilian President Bolsonaro has coronavirus symptoms. A coronavirus test was taken on him, the result of which is expected later today.

Bolsonaro, 65, says he has, eg a 38-degree centigrade fever. According to Brazilian media, he is also given the malaria drug hydroxychloroquine. All his appointments for this week have been canceled.

So, hydroxychloroquine. Apparently, Bolsonaro believes himself in his propaganda quackery about that non-working ‘cure’, recommended by Bolsonaro’s fellow science denialist Donald Trump. If, as is predictable, that ‘miracle’ drug will not help, then Bolsonaro might try another ‘cure’ prescribed by Trump: injection with bleach.

Brazil is one of the most affected countries with over 1.6 million coronavirus infections and more than 65,000 deaths. Bolsonaro regularly opposes measures to prevent the spread of the virus. A judge also had to force him to wear a face mask in public.

NOS radio also reports that the mayor of Atlanta city in the USA, Ms Keisha Lance Bottoms, has become infected. And so have at least six students at Enschede university in the Netherlands.

This 15 June 2020 video shows a chaco puffbird in Brazil.

This 8 June 2020 shows a whistling heron in Brazil.

Brazilians critical of their government’s ambiguous response to a surging coronavirus pandemic dug 100 graves and stuck black crosses in the sand of Rio’s Copacabana beach in a tribute to the people who have died so far.

So far, 40,000 Brazilians have died from COVID-19 and still counting. These are conservative official figures.

The crosses remind me of the many crosses put on a beach in the USA, to commemorate the thousands of soldiers then-President George W Bush sent to his wars to die.

Dutch NOS radio reports today that a fanatical Bolsonaro supporter has smashed some of the crosses.

Many coronavirus patients [not admitted to hospitals, so supposedly ‘mild’ coronavirus patients] still have serious health problems months after their healing. This is evident from a survey conducted by the Lung Fund and the CIRO knowledge center among 1622 people with such complaints.

More than 90 percent of the respondents say they have problems with simple daily activities, such as walking. 85 percent say he or she was in good health before the infection. Now that is only 6 percent.