This February 2020 video from the Rijksmuseum in Amsterdam, the Netherlands says about itself:

‘Caravaggio-Bernini. Baroque in Rome’ (14 February to 7 June 2020) is an exhibition of more than 70 masterpieces by Caravaggio, Bernini and their contemporaries. The paintings and sculptures are on loan to the Rijksmuseum from museums and private collections around the world.

The exhibition has been extended until 13 September.

These 31 August 2020 cell phone photos are of Bernini sculptures.

Twelve divers have today dived into the canals of Amsterdam to investigate underwater life. They investigated how nature developed during the lockdown. During those few months there was much less boat traffic on the water of the capital.

In the Amstel river near the Carré theater, the divers saw far more small crayfish than usual. And a school of small perch was found in the former harbour of the Marineterrein. More plants also grew. In the ring canal in the Watergraafsmeer district, the divers encountered the most diverse underwater life. They found zander, eels and whole schools of small fish there.

To the surprise of the divers, there were also water plants in the water of the Keizersgracht canal. That is special, because the canals normally function as “a closed container”, says ecologist and initiator Jeroen van Herk. “If aquatic plants grow in the canals, then that will affect the entire ecosystem. The water will be purified, which will be followed by crayfish, insects and fish.”

In an article published in Nature Ecology & Evolution today (22 June 2020), the leaders of a new global initiative explain how research during this devastating health crisis can inspire innovative strategies for sharing space on this increasingly crowded planet, with benefits for both wildlife and humans. Many countries around the world went into lockdown to control the spread of Covid-19. Brought about by the most tragic circumstances, this period of unusually reduced human mobility, which the article’s authors coined “anthropause,” can provide invaluable insights into human-wildlife interactions: here.

Today, there was a big demonstration against the police murder of George Floyd in the USA and other racism in the Nelson Mandelapark in Amsterdam.

According to local authorities, over 11,500 people came to this peaceful rally. People distanced spatially against COVID-19.

Tomy Holten died in Zwolle, the Netherlands like George Floyd.

This 1 June 2020 fast motion time-lapse video from the Dam square in Amsterdam shows how today the big square filled with many demonstrators against the police murder of George Floyd in Minneapolis, USA and similar crimes.

The video only shows the first part. Later, many more demonstrators came., making that tramways and cars could no longer pass and streets around the square filled.

According to NOS radio, most demonstrators wore face masks (not mandatory in the Netherlands) against COVID-19 and practised spatial distancing. However, that became difficult when very many people joined.

This Dutch TV video shows webcam images of that demonstration.

The next demonstrations against police brutality in the Netherlands are in The Hague, 2 June 18.00 Koekamp. And Rotterdam 3 June, 17.00, Schouwburgplein square. The organisers ask everyone to wear face masks and to distance spatially.

In this 30 May 2020 video, a New York City police officer of colour says to a Dutch TV correspondent that racism is embedded in the police force. 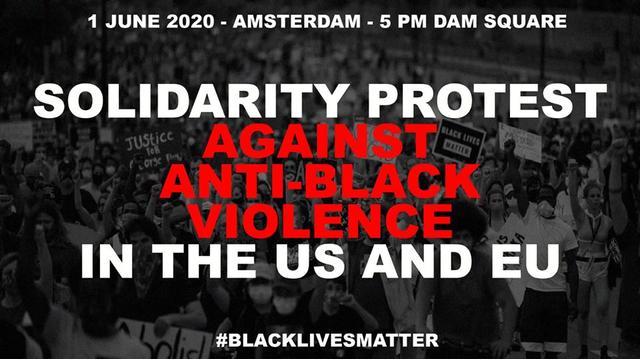 Today, there was a big demonstration on the Dam square in Amsterdam in the Netherlandfs against the murder of George Floyd in Minneapolis in the USA.

According to NOS radio, most demonstrators wore face masks (not mandatory in the Netherlands) against COVID-19 and practised spatial distancing. However, that became difficult when very many people joined, as this video shows.

That moment Naomie Pieter gets the mic… #BLMprotest #Amsterdam pic.twitter.com/5mrP8vEK8I

This 30 May 2020 Dutch video shows people in Rotterdam, the Netherlands reacting to the police murder of George Floyd in the USA.

This 28 May 2020 Dutch 2020 video shows another reaction to it from the Netherlands.

This 1 June 2020 Dutch 2020 video shows another reaction to it from the Netherlands.

This 9 April 2020 video from the Netherlands says about itself:

Zoom into the world of birds that inhabit our city parks during springtime. See how they collect food, nest building material and interact with each other.

“When spring comes” was recorded in a small but old Amsterdam city park, called Frankendael. A place that was once a green and lush 17th-century country seat for rich people fleeing the inner city now lives on as a city park with many different trees, plants and birds.

This 3 April 2020 video from Amsterdam in the Netherlands says about itself:

Like to drink in style? Curatorial assistant Denise Campbell shows us this amazing set of twelve Chinese wine cups in a new episode of #Rijksmuseumfromhome. 🏠 Each ‘month cup’ represents the flower of the month. Cheers! 🍷

This 27 March 2020 video from the Netherlands says about itself:

In the third episode of our series #Rijksmuseumfromhome 🏠 our Ship Model Conservator Tirza Mol talks about all the secrets of the William Rex, our biggest ship model on display. And she shows us how she cleans the majestic vessel! ⚓️⛵️

This 2013 video shows how the William Rex was moved to its exhibition hall.

This 24 March 2020 video from the Netherlands says about itself:

Our curators are working from home, now that the [Rijks]museum is temporarily closed. 🏠

In the second episode of #Rijksmuseumfromhome our Head of Asian Arts Menno Fitski is shining his light on two painted screens of Mount Fuji made by Yoshida Hiroshi. 🗻 🇯🇵

This photo by Rob Buiter shows a peregrine falcon on the Rijksmuseum in Amsterdam, the Netherlands.

Recently, a peregrine couple showed they intended to nest on this building.

The museum welcomes the birds. They have put two nest boxes on the building. On this photo by Rob Buiter, one of these nest boxes is under the clock on the left tower.