At just eight inches tall in northern India, pygmy hogs are the smallest pigs in the world – as well as critically endangered. But breeding programs have given this diminutive animal a real shot at survival.

The trees hornbills depend on in Northeast India are the same trees loggers prize. In the Papum Reserve Forest of Arunachal Pradesh state, three hornbill species nest in the forest. The great hornbill, the wreathed hornbill and the oriental pied hornbill lay their eggs in large tree cavities. But the size of the trees they nest in is precisely what draws in loggers. In the last decade, 20% of the Papum Reserve Forest cover has been lost.

How many people are bitten by venomous snakes in India?

Venomous snakes, like spectacled cobras, Russell’s vipers or common kraits are very common and are responsible for many human bites in India. But how many of them happen each year? How many incidents happen with tigers or elephants? Who is causing bigger human-animal conflict?

This 6 January 2020 video from India says about itself:

What a sighting! The Black Leopard Safari delivers something quite unexpected: a Tiger chasing an Indian Wild Dog, or Dhole, along the road. This Dhole knew exactly where the line was, and stayed just on its side of it. It was shouting the warning to all the other Dogs in the area, as well as any other living thing that there was a Tiger on the move. It is not easy to find two predators together and interacting, so this was a very special sighting indeed!

This May 2020 video says about itself:

We want to show that we need to value biodiversity and realize that most species live in natural habitats. On the other side, it is amazing to watch how well some animals survive in the cities.

Black kites (Milvus migrans) are birds of prey living in Europe, Africa, Asia, and Australia. They are very good at surviving close to people. In many places they scavenge.

This 30 April 2020 video from India says about itself:

This year, an exceptional number of flamingos have migrated to the Mumbai Metropolitan Region.

They have been mostly spotted near the creeks and wetlands around Navi Mumbai,

The Talawe wetland in Navi Mumbai has begun to witness an increased number of flamingos.

Among the huge flocks are two different species – greater flamingos and lesser flamingos.

Greater flamingos are taller and their plumage is more white than pink.

Lesser flamingos are shorter and are more pink in colour.

According to Bombay Natural History Society around 150,000 flamingos visited the Mumbai Metropolitan Region this year

It is 25% higher as compared to last year

This increase in number is mainly being attributed to the successful breeding of flamingos in 2018, which has resulted in large flocks of juveniles visiting this year.

The nationwide [coronavirus] lockdown has also clearly contributed to this mass migration.

The reduction in pollution along with the improvement in the quality of algae have attracted the unusually large number of flamingos.

Not just in India, there have been occurrences of mass migration of flamingos in different parts of the world too.

In Albania, flamingos and pelicans are flourishing amid lockdown.

At the Lagoon of Narta in Albania, the birds have been able to flourish without being disturbed by fishing boats, ferries, and tourists.

These flamingoes have come from Italy, Greece, Spain, France and Africa.

The numbers have increased by almost a third when compared to normal.

Female hornbill moms display a remarkable amount of faith and trust in their male partners. If the male doesn’t come back to their sealed-off nest with food, she and her chick will starve.

This 27 March 2020 video from India says about itself:

A leopard cub’s afternoon nap is interrupted by a curious flock of peafowls. Normally, these birds wouldn’t go anywhere near a predator – but she’s too young to pose a serious threat. 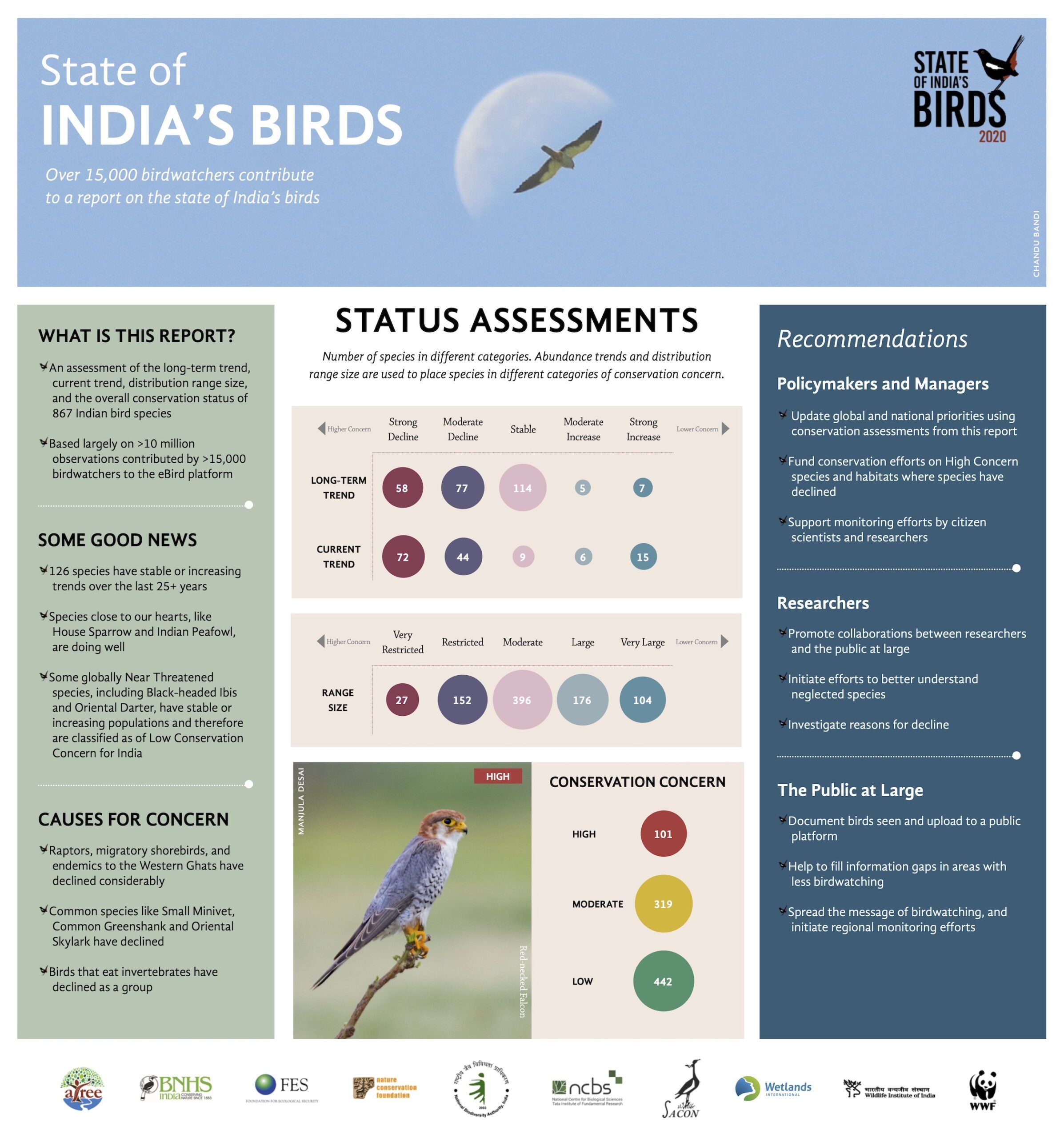 Today marks the launch of the State of India’s Birds: the first comprehensive assessment of the distribution range, trends in abundance, and conservation status for most of the bird species that regularly occur in India. The 10 million bird sightings that informed this milestone report came entirely from eBird.

Of the 867 bird species evaluated in the report, 261 species had sufficient information to calculate population trends. Of those, 52% show long-term declines. But it’s not all bad news: Indian Peafowl, the national bird, has doubled in population over the past 25 years! Check out a summary below, and visit stateofindiasbirds.in for more information.

In his quest to document India’s most elusive cat species, photographer and filmmaker Sandesh Kadur follows a pair of orphaned clouded leopards as they learn the skills they’ll need to survive in the wild.