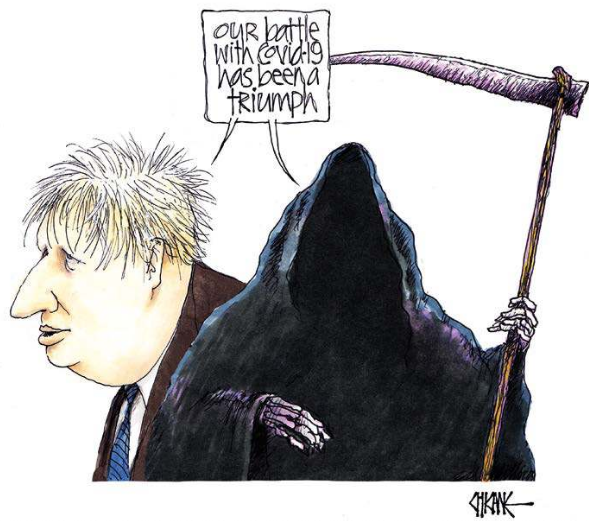 Why is Britain’s coronavirus response so poor? The Covid-19 failure has deep roots within the ideology of successive governments that have been committed to centralised, privatised solutions and hostile to the public sector, says SOLOMON HUGHES.

This 9 June 2020 satirical music video from Britain is a parody of the song Proud Mary by Tina Turner.

The statue of Edward Colston sings.

Left a good job in the city
Joined the Royal African Company
Worked my way up to Deputy Governor
19,000 slaves died on our journeys
Statue was still erected
But it seems some of you objected
Now I’m rolling, rolling, rolling to the river

This 5 June 2020 satiric animated cartoon video by Mark Fiore from the USA says about itself:

And here I thought we wouldn’t have troops on the street until closer to the election. The George Floyd protests have laid bare the underlying horriffic racism that has marred the United States throughout our history. Of course, Donald Trump is definitely not the guy we want in office to help heal our country’s racial wounds.

A perfect storm of Trumpism happened when the administration ordered police and military forces to violently clear peaceful protesters from Lafayette Park next to the White House, just so Trump could make a show of holding a Bible in front of St. John’s Church. The president finally behaved like one of the autocrats he admires. He’s a wannabe strongman who unfortunately just showed us he has the tools to be an actual strongman.

But it’s not just Trump, Attorney General William Barr, Jared Kushner and Mark Esper are all complicit in this attack on our democracy and their actions should not be laughed off as just “Trump being Trump”. In the United States, this sort of thing is illegal, I only hope our laws catch up with this band of criminals bent on undermining our democracy.

Stay safe, keep fighting for racial justice and watch out for troop deployments.

US cops shot dead black man passed out in a car the same day George Floyd was killed: here.

Rupert Murdoch’s Fox News promotes conspiracy theory that the mass anti-racist demonstrations are not caused by police brutality, but by the ‘Weather Underground’ (defunct in the 1970s): here. Probably, the puppets of anti-Semitic billionaire Rupert Murdoch base that on the fact that, today, there is a meteorological information internet site, called Weather Underground.

This 31 May 2020 satiric music video from Britain is called Katrina and the Second Waves – Flocking on Sunshine.

It is a parody of the song Walking on Sunshine, by Katrina and the Waves.

It is about people in Britain who think that the COVID-19 pandemic is basically over: because Dominic Cummings, adviser to Conservative Prime Minister Boris Johnson, violates public health rules against travel. Because Boris Johnson says people should go back working at unsafe non-essential-workplaces, some people think it is supposedly safe to go to crowded beaches; which may cause a second wave of COVID-19 illness.

I used to think lockdown was over, now baby I’m sure
And I just can’t wait to spend all day down at Durdle Door
Now every time I check on the guidance, it just says ‘stay alert’
I think that means: try to emerge from your day out unhurt

I used to think lockdown was over, now I know that it’s true
The government’s fucking atrocious, why can’t we be too?
The public loos are closed so I’ll just have to bury my crap
Like a cat
I already did my bit for the NHS when I clapped

This 24 May 2020 satiric music video from Britain about the adviser of British Conservative Prime Minister Boris Johnson is called Dominic Cummings – Driving Home for COVID.

It is a parody of the song Driving Home for Christmas by Chris Rea.

Top-to-toe in dead cats
Bamboozling you with 5D chess
Soon there’ll be a fuckup, yeah
To distract from the previous mess

Now I’m driving back
To London, but I
I will return
Return to Durham
Driving with my COVID

Clip here. The van is run by the group Led By Donkeys. pic.twitter.com/0OZZpVcwOp

This 24 May 2020 video is from in front of Dominic Cummings´ house.

This 24 May 2020 video from England says about itself:

Jaywick‘s fight: Community support in one of UK’s poorest towns

While towns and cities across the United Kingdom struggle with the effect of the new coronavirus, one of the poorest places is coping with the pandemic.

Jaywick made international headlines when the United Nations highlighted it as an example of how the British government has failed to deal with poverty.

Al Jazeera’s Laurence Lee reports from Jaywick in the UK.

This 12 May 2020 satiric music video from Britain is called Summer of COVID-19 (Bryan Adams parody).

It is a parody of Bryan Adams’ song Summer of ’69.

Those bastards ate a load of bats
Now I can’t play the Albert Hall
Pretty shit, man I hate China
At least my tweet is going viral

Oh yeah
I hate the summer of COVID-19
And China

The Healthiest Man on the Planet!

There is nothing to worry about because President Trump is doing a tremendous job, right? Plus, it’s all China’s fault. And if it’s not China’s fault, the Europeans are behind our current virus troubles. After all, it is a “foreign virus.” Paging Stephen Miller!

VP Pence currently touring the Mayo Clinic–and seems to be the only one not wearing a mask pic.twitter.com/uJz549k6BR

This 21 March 2020 musical video is a satire about the British Conservative government‘s coronavirus response.

It is parody of the song Ghost Town by The Specials.

The UK government‘s Specials tribute band release a song for the coronavirus outbreak.

Do you remember the good old days before the ghost town?
We’d dance and sing and point at A&Es and have them shut down
(That one there!)

Do you remember the behavioural science at the Nudgestock?
I made some notes, just let me program them into Matt Hancock

This town
Let’s make it partially like a ghost town
Unenforced, so insurers don’t scream
This place
Let’s dither on a clampdown
Herd immunity
Situation getting shitty

This 26 February 2020 humorous music video from Britain says about itself:

I love unions
They love me
Not so much the DNC
They want Michael Bloomberg, Mayor Pete or Joe
They’ll uphold the status quo

I love unions
They love me
Not so much Team Hillary
If you ask me, they’d take four more years of Trump
They can take a running jump

It is a parody of the song Hello Muddah, Hello Fadduh (A Letter from Camp).

Home secretary Priti Patel travels back in time and deports her parents to Kampala, Uganda.

Goodbye muddah
Goodbye fadduh
Off you go to
Kampala, Uganda
Idi Amin
Is rampagin’
And he said he wants to clear out all the Asians

Got eight million
Folks inactive
I can make ‘em
More proactive
Students, carers
Folks in prison
Who I threw in there for counter-terrorism

Civil servants
Said I’m crackers
So I kicked ‘em
In the knackers
Now off you go to
Potential slaughter
Truly yours, your dearest ever-lovin’ daughter

Home Office is ‘institutionally racist’! The way to end the ‘hostile environment’ is to bring down the Tories: here.

The move to appoint Andrew Sabisky as an adviser to the British government confirms the emergence of a fascist element in the Conservative Party. In blog posts and comments, Sabisky has said, “[V]ery real racial differences in intelligence are significantly—even mostly—genetic in origin” and that “it would be nice” if politicians paid attention “from the standpoint of immigration control …” He has argued, “One way to get around the problems of unplanned pregnancies creating a permanent underclass would be to legally enforce universal uptake of long-term contraception”. here.