Enjoy this archived live conversation with artist and Red-tailed Hawk cam aficionado David Cohen as he explains the inspiration and craftsmanship behind his carving of the Cornell Hawks nest that is now on display at Cornell University’s Corson-Mudd Hall.

Today, this lesser black-backed gull on the balcony.

See also the other, sculptured birds on the foreground, including a black-throated loon on the right.

This February 2020 video from the Rijksmuseum in Amsterdam, the Netherlands says about itself:

‘Caravaggio-Bernini. Baroque in Rome’ (14 February to 7 June 2020) is an exhibition of more than 70 masterpieces by Caravaggio, Bernini and their contemporaries. The paintings and sculptures are on loan to the Rijksmuseum from museums and private collections around the world.

The exhibition has been extended until 13 September.

These 31 August 2020 cell phone photos are of Bernini sculptures.

This 16 June 2020 video from the USA says about itself on YouTube:

In US news and current events today, one person is in critical but stable condition after a man believed to be part of an armed militia opened fire on a group of protesters trying to dismantle a statue of Spanish conquistador Juan de Oñate in New Mexico.

Today Oñate is known for the 1599 Acoma Massacre. …

Oñate ordered a brutal retaliation against Acoma Pueblo. The Pueblo was destroyed.[2] Around 800–1000 Ácoma were killed.[3]. …

Of the 500 or so survivors, at a trial at Ohkay Owingeh, Oñate sentenced most to twenty years of forced “personal servitude” and additionally mandated that all men over the age of twenty-five have a foot cut off.[3] … He was convicted by the Spanish government of using “excessive force” against the Acoma people.

In London, England, the extreme right ‘defends’ memorials by urinating on them (not a slave trader or colonialist memorial in that case).

In New Mexico, the extreme right ‘defends’ statues by attempted murder. They glorify the war in which the United States conquered New Mexico from Mexico. According to 19th century United States general and Republican party President Ulysses Grant, that war was ‘one of the most unjust wars ever waged by a stronger against a weaker nation.’ The far right glorifies that war by violence against Mexicans and others of Latin American ancestry, including by murdering little girls.

We just obtained video of the shooting. pic.twitter.com/yjB6NHdKe2

In the wake of the police killings of George Floyd, Rayshard Brown, Breonna Taylor and so many more Black people and people of color, the Black Lives Matter protests and George Floyd protests have opened the eyes of the world to the insidious reach of systemic racism.

As the United States reconciles with its racist past, by removing Confederate statues and moving to rename military bases named after treasonous Confederate soldiers, some protesters are calling for an even more sweeping statement against the historical horrors of racism. In many cities protesters are removing Christopher Columbus statues, citing his history as a genocidal colonizer, and in New Mexico, statues of Spanish Conquistadors are a testament to the brutal colonization of indigenous people.

Sadly, peaceful protests and peaceful protesters have been rocked with violence, usually from armed white supremacist militias in defense of their ugly past, and this case appears no different. The peaceful protester shot trying to take down a colonialist statue is evidence of a larger conflict brewing in America, one that will take real change from the top down to eliminate racial violence and ensure justice and equality for all.

The attempted murder in Albuquerque was by a former Republican local council candidate. He is Steven Baca, a Donald Trump supporter.

A Paleolithic bird figurine from the Lingjing site, Henan, China

The recent identification of cave paintings dated to 42–40 ka BP in Borneo and Sulawesi highlights the antiquity of painted representations in this region. However, no instances of three-dimensional portable art, well attested in Europe since at least 40 ka BP, were documented thus far in East Asia prior to the Neolithic.

Here, we report the discovery of an exceptionally well-preserved miniature carving of a standing bird from the site of Lingjing, Henan, China. Microscopic and microtomographic analyses of the figurine and the study of bone fragments from the same context reveal the object was made of bone blackened by heating and carefully carved with four techniques that left diagnostic traces on the entire surface of the object.

Critical analysis of the site’s research history and stratigraphy, the cultural remains associated with the figurine and those recovered from the other archeological layers, as well as twenty-eight radiometric ages obtained on associated archeological items, including one provided by a bone fragment worked with the same technique recorded on the object, suggest a Late Paleolithic origin for the carving, with a probable age estimated to 13,500 years old.

The carving, which predates previously known comparable instances from this region by 8,500 years, demonstrates that three-dimensional avian representations were part of East Asian Late Pleistocene cultural repertoires and identifies technological and stylistic peculiarities distinguishing this newly discovered art tradition from previous and contemporary examples found in Western Europe and Siberia.

This 23 January 2020 video is called Sculpting a SCIENTIFICALLY ACCURATE VELOCIRAPTOR bust – How to sculpt a realistic dinosaur.

This 2011 video is about the Pachacamac Idol.

The Pachacamac Idol of ancient Peru was a multicolored and emblematic sacred icon worshipped for almost 700 hundred years before Spanish conquest, according to a study published January 15, 2020 in the open-access journal PLOS ONE by Marcela Sepúlveda of the University of Tarapacá, Chile and colleagues.

The Pachacamac Idol is a symbolically carved wooden statue known from the Pachacamac archaeological complex, the principal coastal Inca sanctuary 31 km south of Lima, Peru during the 15th-16th centuries. The idol was reportedly damaged in 1533 during Spanish conquest of the region, and details of its originality and antiquity have been unclear. Also unexplored has been the question of whether the idol was symbolically colored, a common practice in Old World Antiquity.

In this study, Sepúlveda and colleagues obtained a wood sample from the Pachacamac Idol for chemical analysis. Through carbon-dating, they were able to determine that the wood was cut and likely carved approximately 760-876 AD, during the Middle Horizon, suggesting the statue was worshipped for almost 700 years before Spanish conquest. Their analysis also identified chemical traces of three pigments that would have conferred red, yellow, and white coloration to the idol.

This nondestructive analysis not only confirms that the idol was painted, but also that it was polychromatic, displaying at least three colors and perhaps others not detected in this study. The fact that the red pigment used was cinnabar, a material not found in the local region, demonstrates economic and symbolic implications for the coloration of the statue. The authors point out that coloration is a rarely discussed factor in the symbolic, economic, and experiential importance of religious symbols of the pre-Columbian periods, and that more studies on the subject could illuminate unknown details of cultural practices of the Andean past in South America.

The authors add: “Here, polychromy of the so-called Pachacamac Idol is demonstrated, including the presence of cinnabar.” 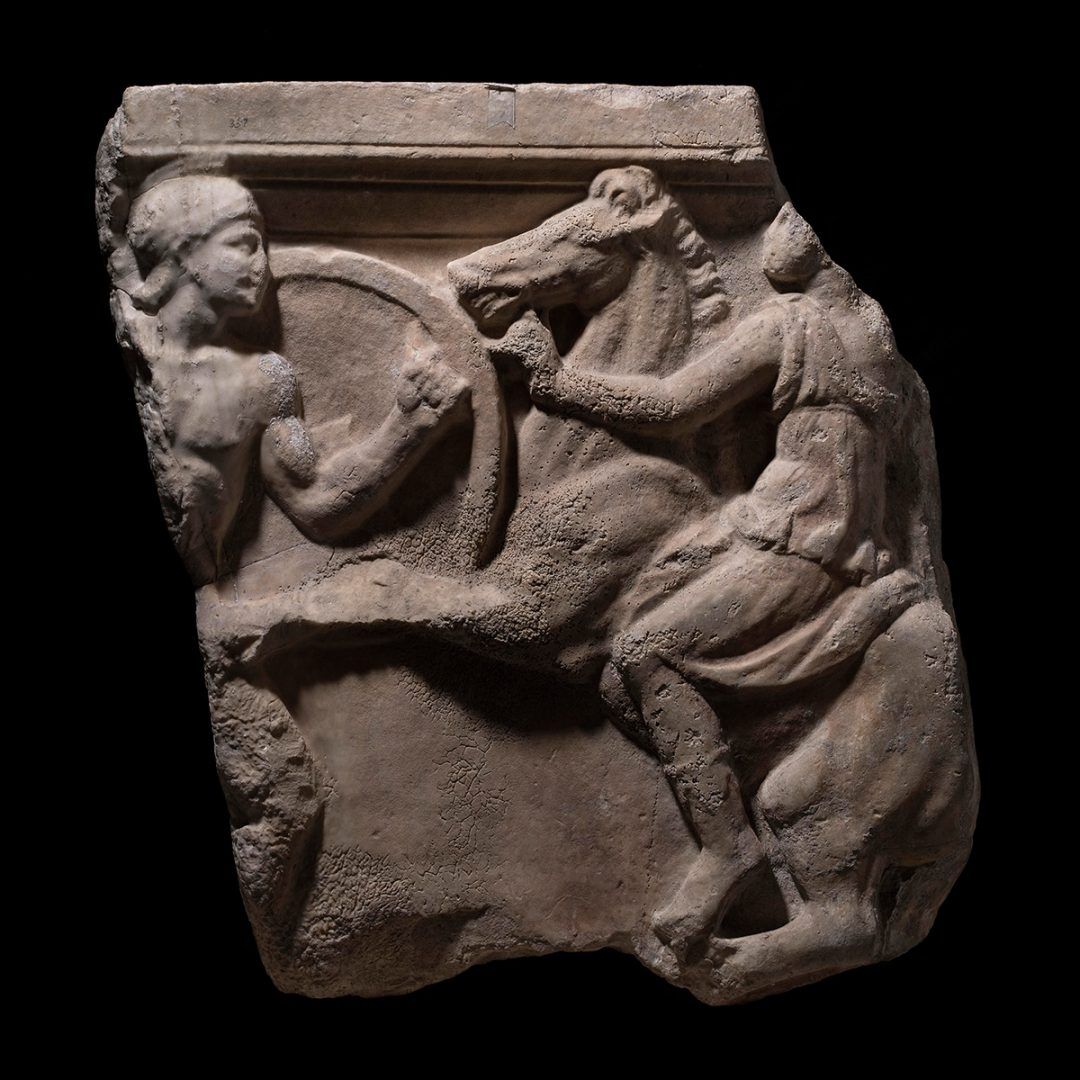 The national antiquities museum in Leiden, the Netherlands, reported on 1 July 2019 that they had bought this Roman empire age relief.

The relief, 86 x 87 x 16 centimetre, probably once was part of a sarcophagus.

It shows a fight between a Greek foot soldier and an Amazon horsewoman.

In Greek mythology, there was a war between the Greeks and the Amazon horsewomen nation. The war, the myths say, was because Greek demigod Heracles had stolen the precious girdle of Amazon Queen Hippolyta.

This photo shows a great tit fledgeling among sculptured birds. At that spot, the young bird may face less danger from predators.

Joke van de Poppe made this photo in her garden in the Netherlands.

This 2 January 2019 video from Canada says about itself:

Calvin Nicholls takes cutting and pasting to a new level with sculptures made from hundreds of pieces of paper.

When you think of using paper as an art medium, you might think first of origami or kids’ crafts. But when Calvin Nicholls uses paper, it turns into something else altogether. Nicholls’s pieces featuring animals are all made of tiny hand-cut pieces of paper, layered and glued in a painstaking and intricate act.

The result? Incredibly accurate depictions of wildlife with a magical effect. Nicholls has been a lover of nature ever since he can remember. And that love is evident in his artwork.

He explains: “My inclination is to dig deeper and appreciate differences like: how are the primary features different on the vulture from the robin? That’s what seems to add to the effect, or to the moment or the authenticity of these gorgeous creatures.”

Paper is a tricky material to work with, which means Nicholls’s larger pieces can take up to four months to create. But paper also offers a quality and depth that’s distinct from painting, which is why he’s chosen it as his medium. “When people look at my artwork, they love to be surprised. ‘What is that material? Is that bone? Is that clay?’ At a distance it’s not clear.” In this video, get inside Nicholls’s appreciation for detail as you watch the process unfold.

From the Cornell Lab of Ornithology in the USA, March 2019, about Canada:

These Amazingly Detailed Bird Sculptures Are Made Out of Paper

Calvin Nicholls’s breathtaking paper sculptures use light, shadow, and shape to create fantastically detailed birds that leap, lean, and fly straight out of their frames. From a flamboyant bird-of-paradise to a humble upside-down nuthatch, prepare to be awed at Nicholls’s exquisite detail and talent—all made from paper.

Join 6,033 other followers
Follow Dear Kitty. Some blog on WordPress.com