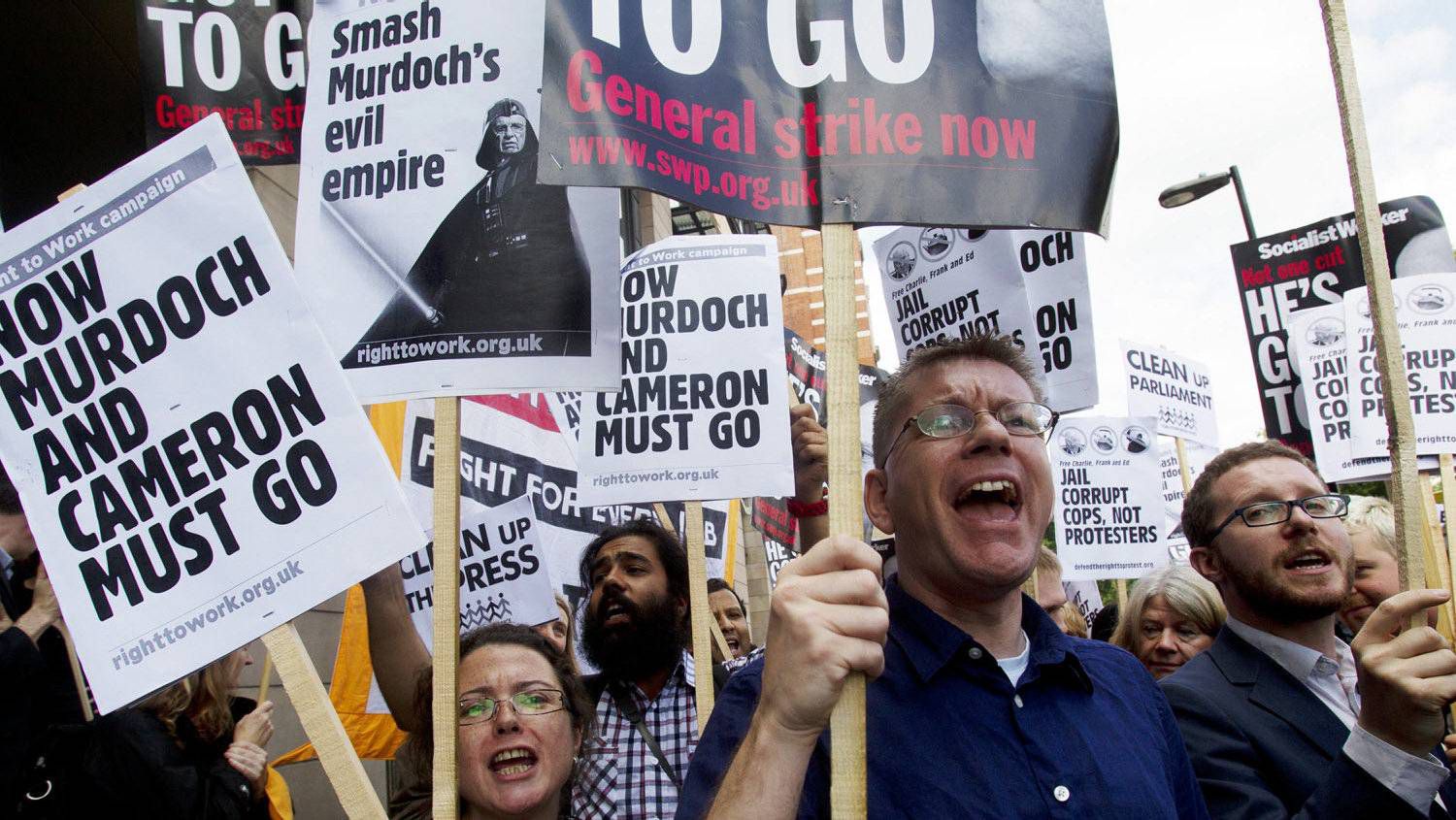 Tony Blair is Rupert Murdoch’s daughter’s godfather. Which helps Murdoch in impunity for his phone-hacking, his burglaries, his bribing of police, etc.

Together, they supported dictatorships, in Kuwait, Bahrain, and about everywhere else.

Once upon a time, Rupert Murdoch used to have another close crony: Silvio Berlusconi. Berlusconi was a Blair crony as well. Together, Murdoch and Berlusconi privatised TV in Italy. Together … However, then Rupert and Silvio quarreled about the spoils of the privatisation loot. Suddenly, the Murdoch empire discovered Berlusconi‘s sexual, financial and other scandals.

A ‘terminal’ rift has severed relations between Rupert Murdoch and Tony Blair over reports of Mr Blair‘s friendship with the entrepreneur‘s ex-wife Wendi Deng, it is claimed.

Blair has always stated that his relationship with Deng is platonic and there is no suggestion of any impropriety by Blair or Deng.

Despite efforts by Blair to contact Murdoch, the media mogul has refused to speak to him since he filed for divorce from Deng in June, according to the Mail on Sunday.

Sources close to Murdoch in London claim that Blair, 60, and Deng, 44, had ‘multiple encounters’ without 82-year-old Murdoch‘s knowledge.

They are said to have stayed overnight at Murdoch‘s £12m California home on weekends in October 2012 and April 2013, and spent a weekend at Murdoch‘s LA home and meetings in London and New York.

Murdoch and Deng’s divorce was finalised by a US court last week after the couple reached an “amicable” divorce settlement to end their 14-year marriage.

On Saturday night a feud erupted between allies of Blair and Murdoch, whose stable of newspapers includes The Sun and The Times.

A close friend of Blair told the Daily Mail: “Rupert Murdoch is putting out ridiculous stories about Wendi and Tony which are not true. It is the ravings of a sad old man.”

A friend of Murdoch told the newspaper: “Rupert Murdoch will have nothing more to do with Tony Blair. Not ever.”

Murdoch and Blair were close allies for many years and Murdoch’s support is widely considered to have been a crucial factor in Labour’s three consecutive election victories from 1997 onwards.

Blair and Murdoch were good friends, and Blair even became godfather to the Murdochs‘ daughter Grace in 2010.

Speculation of an affair between Blair and Deng first emerged in June after a tweet from BBC journalist Robert Peston who said: “Am told that undisclosed reasons for Murdoch divorcing Deng are jaw-dropping and hate myself for wanting to know what they are.”

At the time a spokesperson for Blair denied an affair with Deng.

Murdoch met Deng, a Yale business school graduate, in 1997 on a business trip to Shanghai when he sought to hire a translator and guide.

Spokespeople for Blair, Murdoch and Deng did not respond to requests for comment.

What does Tony Blair’s wife Cherie think about this?

A sensational letter reportedly written by Rupert Murdoch’s former wife Wendi Deng, in which she appears to praise Tony Blair’s “good body”, “nice legs” and “butt”, has been published: here.

Tony Blair and Rupert Murdoch: the deconstruction of a friendship. Even if untrue, rumours of Blair’s alleged affair with Wendi Deng mean there is no fixing the former intimacy of the two godfathers; here.

Tony Blair will never discuss speculation over his relationship with Rupert Murdoch’s ex-wife, Wendi Deng. The former Prime Minister reacted angrily when asked about the issue in an interview with the Economist, banging his coffee cup “so loudly into its saucer that it spills and everyone in the room jumps”: here.