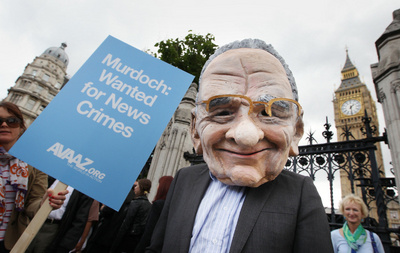 Gwyneth Paltrow is among thousands that could have been targeted by a tabloid phone hacking operation.

The arrest of senior journalists, a limited admission of liability by News International, the pressing of civil test cases for damages, and the possibility of a further police investigation into illegal payments to officers, have deepened the crisis surrounding the News of the World (NoW) phone hacking scandal.

The case continues to reveal the close relations of the media, police and politicians. Last week, Prime Minister David Cameron rejected calls for a public inquiry into phone hacking. He did so in an interview with the News Corporation channel Sky News. Pre-empting further investigations he said, “I’m not sure anyone fully knew how widespread it was”.

The matter first came to light in 2006, when the NoW published stories concerning members of the royal family. The NoW’s royal editor Clive Goodman and a private investigator he employed, Glen Mulcaire, were jailed for four and six months respectively in 2007 for illegally accessing mobile phone messages.

The line taken by the paper was that Goodman was a rogue reporter, and Mulcaire an out of control investigator. The NoW’s then editor, Andy Coulson, resigned, denying any wider knowledge of phone hacking. He later became Cameron’s director of communications.

When Metropolitan Police officers searched Mulcaire’s home, they found 4,332 names, 2,978 mobile phone numbers, and 91 PIN codes to access voicemails. But they interviewed only one journalist, Goodman, and a senior officer later told MPs that they had only identified “8 to 12” possible victims. Andy Hayman, who led the original police inquiry, resigned shortly afterwards and started writing a column for the Times, another News International paper.

A number of public figures questioned whether their messages had been hacked, and suggestions mounted that many politicians had been targeted. Former Prime Minister Gordon Brown asked the police to investigate whether his phones had been hacked in 2005-2007 when he was chancellor.

From 2009 the Guardian published further revelations of the scale of hacking. News International invited the Guardian to submit any evidence of wrongdoing to the police and the Metropolitan Police obligingly decided that “no additional evidence has come to light” and refused to open a new inquiry.

It then emerged that News International (NI, the UK subsidiary of News Corporation) had paid out more than £1 million in damages and costs to settle claims of phone-hacking against three people involved in football. These were not disclosed during the earlier trial because of gagging clauses.

For many Australians, Fairfax Media is a benign alternative to Rupert Murdoch’s right-wing media empire. Well-meaning people buy Fairfax newspapers such as the Sydney Morning Herald and The Age because they believe they present a fairer picture of the news. But just how fair is Fairfax? Here.

David Swanson, War Is A Crime: “Rupert Murdoch, who got his start in business marketing rats and manure, has chosen to deny Italy access to a television network that has presented critical coverage of both Murdoch and of leading Italian media baron and prime minister, Silvio Berlusconi…. Meanwhile, back in the land where every goddam airport and hotel lobby blares Fox News at you, our free and independent press has the drawback of all agreeing with itself about almost everything. There’s no anti-Fox News. There’s very little investigative, independent, anti-authoritarian reporting of any sort. Newspapers are dying out, and with them the profession of reporter”: here.

14 Propaganda Techniques Fox News Uses to Brainwash Americans. Dr. Cynthia Boaz, Truthout: “It is ironic that in the era of 24-hour cable news networks and ‘reality’ programming, the fluff-to-news ratio and overall veracity of information has declined precipitously. Take the fact Americans now spend on average about 50 hours a week using various forms of media, while at the same time cultural literacy levels hover just above the gutter”: here.