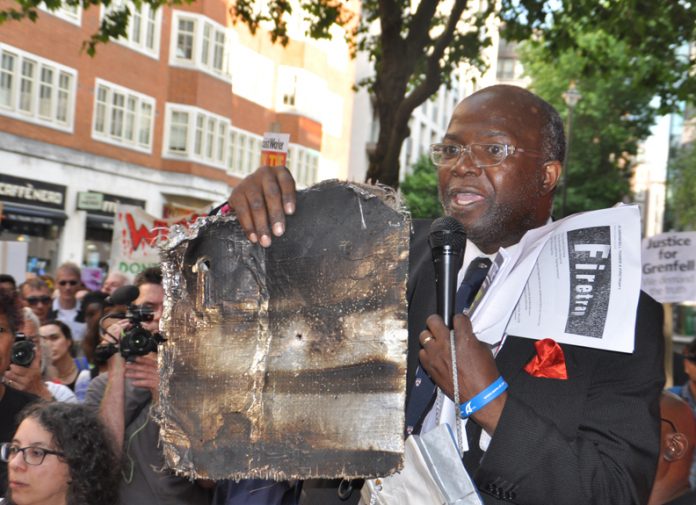 This photo from London, England shows a local resident holding up charred remains of Grenfell Tower cladding; 468 buildings across the UK are clad in the same flammable aluminium composite. And the British Conservative government refuses to ban it.

FLAMMABLE cladding is not going to be banned from existing buildings, Tory Housing Secretary James Brokenshire announced yesterday at the Conservative Party conference. This is despite the Fire Brigades Union (FBU), survivors from the Grenfell Tower fire and the Royal Institute of British Architects all demanding that it is immediately banned and stripped.

Brokenshire announced that combustible cladding is only to be banned from newly built schools, hospitals, care homes, student accommodation and residential buildings in England and only if the building is above 18m (60ft) tall. The ban will not be applied retrospectively where materials have already been fitted.

Firefighters union the FBU has called for a complete ban on combustible cladding and the immediate removal of flammable cladding on all buildings in the UK. Matt Wrack, FBU general secretary, said yesterday: ‘This is not the outright ban on combustible cladding that firefighters have been calling for. The Westminster government continues to allow cladding of limited combustibility for any building work in the future. The FBU called for a universal ban on these flammable materials.

‘These measures do not deal with the existing cladding on nearly 500 buildings across England where people live and work every day. ‘The government’s proposals only apply to buildings over 18 metres high, plus hospitals, care homes and student accommodation – when they should apply to all buildings, whatever their height or use.’

Earlier this year, the Royal Institute of British Architects called for a total ban on flammable cladding, as well as a requirement for sprinklers to be fitted, and a second means of escape for high-rise residential buildings. Of 295 blocks of private flats across England with combustible cladding, including 28 high-rise hotels, only two have been completely fixed.

Of 159 social housing blocks that have cladding that failed fire tests in the wake of the Grenfell disaster, only 15% have had the cladding removed. The government has refused to say which buildings are clad in flammable material. They claim this information could ‘endanger the mental and physical health of people living in the buildings and could compromise their safety.’

However, in a number of councils the truth has come out. For instance, in the London borough of Hackney in east London, three blocks at Lincoln Court, in Bethune Road, Stamford Hill and at Hugh Gaitskell House in Stoke Newington unsafe flammable cladding is present.

Wardens are also patrolling seven-storey Burbage House in Poole Road, Hoxton, from 8pm to 8am to ‘keep an eye on the building’ because of its aluminium composite material with unmodified polyethylene filler which has been shown in tests to not adequately resist fire.

Alarmingly plans to re-clad Landmark Heights, in Daubeney Road Lower Clapton ‘are to be shelved’. Landmark Heights is privately owned but was originally built by the council.

More on this issue is here.