This 16 June 2017 British TV video from London says about itself:

Nick Paget-Brown, the Conservative leader of Kensington and Chelsea Council during an interview on BBC Newsnight:

The firefighters are the heroes of Grenfell. Jail the real culprits – big business and the government!

A LEAKED report by the chairman of the Grenfell Tower fire inquiry, Martin Moore-Bick, has found a scapegoat for the fire – they are now blaming the London Fire Brigade (LFB) itself!

The fire, which claimed the lives of 72 men, women and children, rapidly spread because of flammable cladding, and a cheap and shoddy refurbishment carried out because the council tower block was considered ‘an eyesore’ by a section of the rich and wealthy residents of the Royal Borough of Kensington and Chelsea. The report ignores this!

The 1,000-page document follows the first phase of the inquiry, which looks at what happened on the night and concludes that ‘fewer people would have died’ in the fire if the LFB had removed the ‘stay put’ policy earlier.

Grenfell Tower was not a fire risk until the refurbishment undertaken by the Royal Borough of Kensington and Chelsea (RBKC) between 2014 and 2016.

The inquiry heard that Grenfell Tower was turned into a ‘death trap’ by this dangerous refurbishment. The company the council chose to carry out the refurbishment – Rydon – used cheap flammable cladding and did a shoddy job, there were gaps in the window frames and between the cladding and the building. This turned Grenfell Tower into a death trap – a chimney wrapped in flammable material.

After six people died in the Lakanal House fire on 3rd July 2009 in Camberwell, south London, it was recommended to the government that all buildings be fitted with sprinklers – this is something the government refused to do.

How dare they blame a fire service which has been systematically stripped to the bone by a Tory government intent on sacking hundreds of firefighters, axing fire engines and closing down stations!

Leader of the Fire Brigades Union, Matt Wrack, said yesterday: ‘It is unfair to target firefighters, when the real culprits are corporate interests and politicians. The truth is that the fire spread in the way that it did because it was wrapped in flammable cladding. That is a key issue, yet it is not seriously being addressed.’

Fire Brigades Watch Manager Mike Dowden told the inquiry: ‘In the case of somewhere like Grenfell Tower, that only had one communal staircase, as you can imagine, it would be very difficult to facilitate evacuation of residents when we have firefighters and equipment going up the same staircase as well.’

Fire safety expert Arnold Tarling commented: ‘If the firefighters had advocated evacuation, the staircase was full of highly toxic gas, because the air extract was not working. You have one person tripping on that staircase, everybody else goes on top, you would still have huge numbers of people dying.’

Meanwhile, despite it being well over two years since the fire, only one out of 158 social housing blocks wrapped in the same flammable cladding has been made safe. This government has failed to act to ensure buildings are safe. They refuse to install sprinkler systems, flammable cladding has not been replaced … they have still not even re-housed all the Grenfell survivors and their families.

We can’t wait a year for the Grenfell Inquiry to resume. The inquiry is a sham to divert blame away from the real criminals. It is the Tory RBKC, and the Tenants Management Organisation who put the cladding up, Rydon the company that did the refurbishment, and the Tory government that has closed ten fire stations in London, axed 552 firefighters’ jobs and got rid of 14 fire engines in the capital that are responsible for the deaths of 72 people in the Grenfell Tower fire.

They must be brought to justice and the Tory government must be kicked out before there is another tragedy. 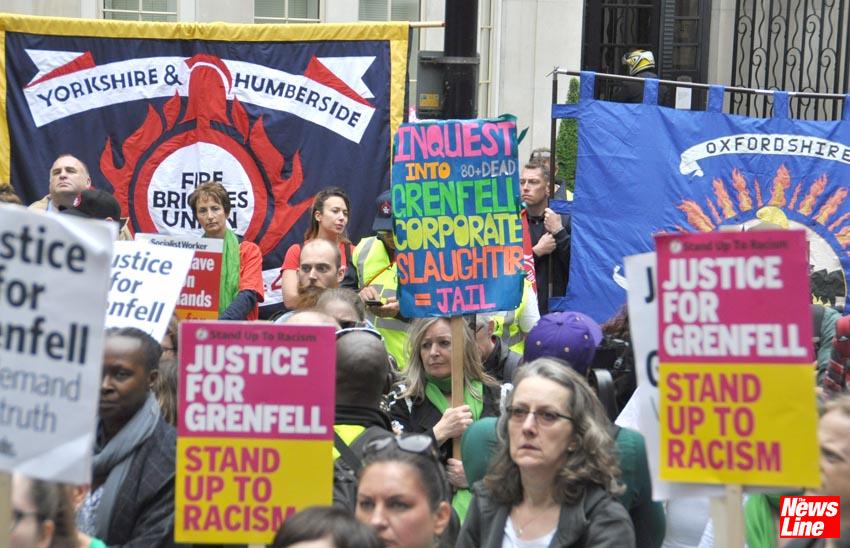 Firefighters are not to blame for Grenfell’s ‘impossible’ evacuation conditions, says FBU: here.

THE GMB union has slammed the failure of the Grenfell Report to tell the full story. The roots of this disaster lay not with the events of that night but on the years of savage cuts leading up to it, the union says. GMB, the union for emergency service staff, reacted with fury yesterday after publication of a report into the Grenfell Tower disaster that left 72 people dead: here.