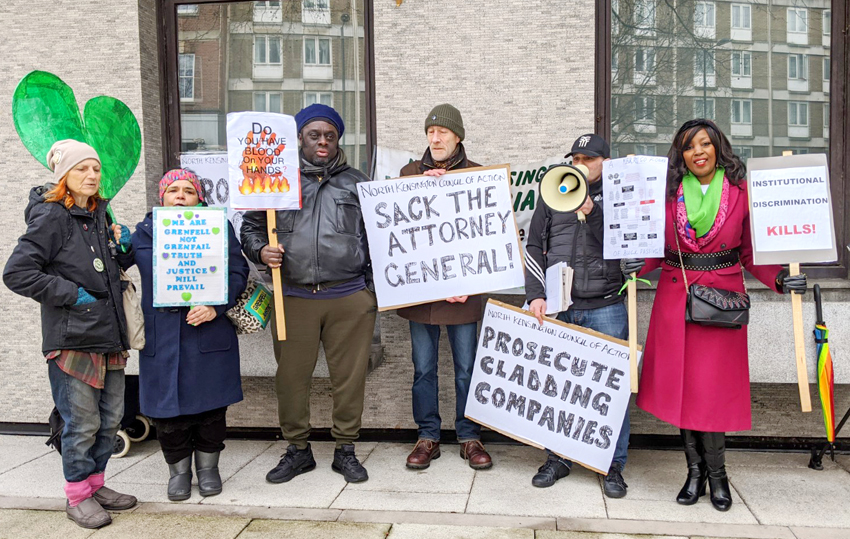 ‘SHUT down the inquiry, it’s a disgrace!’ protesters shouted outside the Grenfell inquiry yesterday, on the first day it resumed after the Attorney General had ruled in favour of the cladding companies.

The new [Conservative] Attorney General, Suella Braverman, ruled that anything said in the inquiry cannot be used in a court of law.

The protesters shouted: ‘No immunity from prosecution! Prosecute now!’ and ‘Grenfell Inquiry! Whitewash!’

Inside the inquiry, chair Martin Moore-Bick began by confirming that witnesses have been guaranteed by Braverman that any answers to the inquiry will not be used against them in any future criminal prosecution.

He said: ‘No one is able to justify refusing to answer questions on the grounds that to do so would or might expose himself or herself personally to a risk of prosecution.’

As Andrzej Kuszell, the director of Studio E the architecture firm that worked on the disastrous refurbishment, began giving evidence in the first few minutes of the session, WRP members Scott Dore and Jonty Leff stood up and shouted: ‘This is a disgrace! The firefighters weren’t given immunity from prosecution! This is a whitewash! Shut this inquiry down and move straight to the prosecutions!’

The proceedings stopped and security was called. The two were approached by Stuart Cundy, the lead officer in the Metropolitan Police investigation into the disaster and both were forced to leave.

Other members of the public were heard saying: ‘What’s the point?’ ‘Why don’t you ask the corporates to leave?’ ‘It’s a disgrace!’

Joe Delaney, who lived in the block next to Grenfell Tower and is a core participant in the inquiry, also shouted: ‘You sold your soul, Sir Martin. The public inquiry isn’t about an inquiry. It’s a cover-up!’

When the inquiry resumed Studio E Architects, who designed the refurbishment of Grenfell Tower which turned it into a fire trap, admitted that they had never worked on a tower block before.

In the inquiry, they admitted that, prior to Grenfell, they had not worked on over-cladding a high-rise residential building, and had ‘never before worked on the refurbishment of a large tower block.’

Kuszell, speaking on behalf of Studio E, was shown emails between colleagues who discussed council fears that the tower was its ‘worst property asset’ and would be a ‘poor cousin’ to the new school next door, also designed by Studio E Architects.

He refused to be drawn on whether he considered the block an ‘eyesore’, but told the hearing: ‘This was an upgrade of a very large swath of that part of Kensington.

Kuszell said he remembered the cladding of the tower being ‘as much to do with the thermal performance … as to do with improving the appearance of the building.’

PLANS for the Grenfell Tower refurbishment focused more on the “appearance and price” of cladding than its fire safety, the inquiry into the disaster heard today. Architect Tomas Rek, a former employee of the firm in charge of the refurbishments, said that budget concerns appeared to bring about the switch from the proposed zinc to the cheaper and more flammable aluminium composite material (ACM) panels. The inquiry heard that combustible ACM panels were chosen in 2014 by architects Studio E in a bid to save £454,000 on the refit: here.