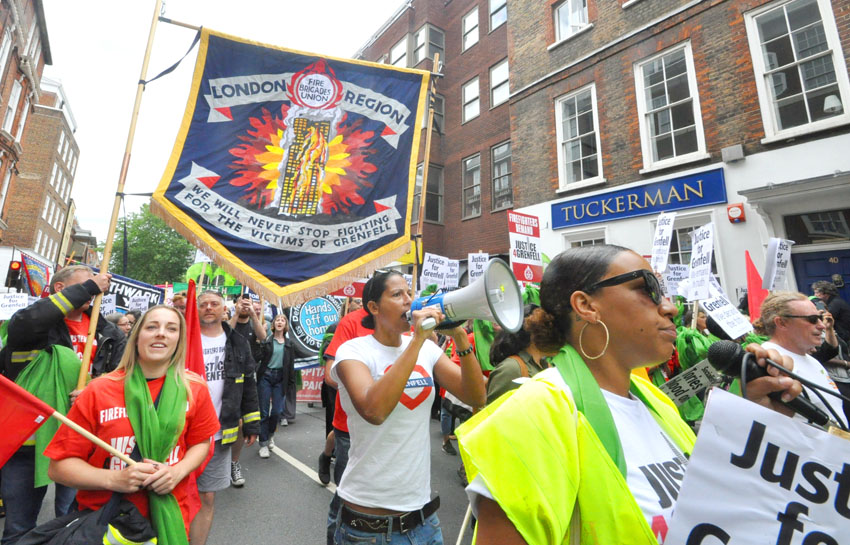 ‘NO ONE should be immune from prosecution. The firefighters certainly weren’t and the manufacturers of the cladding definitely should not be,’ Lucy Masoud FBU member and Grenfell campaigner said yesterday.

She was responding to the news that Martin Moore-Bick, chairman of the inquiry into the Grenfell disaster, yesterday said he would be writing to the Attorney General for an undertaking that any evidence given by a selection of corporate witnesses would not be used to pursue criminal charges against them.

Masoud continued: ‘They should be made to give evidence and if that evidence leads to a criminal prosecution then there must be no immunity.

‘As firefighters were called to the inquiry, we gave evidence without question.

‘Firefighters were scrutinised, they were questioned, they were criticised and in some case they received abuse afterwards.

‘Yet somehow these people, who were actually responsible for the refurbishment are to be treated with kid gloves.

‘We want justice for the 72 people. No one in this situation should be granted immunity, and definitely not the manufacturers of the cladding.

‘It is not good enough that the companies are demanding that they should be immune from prosecution. What does this tell you about possible culpability?’

Joe Delaney from the Grenfell Action Group said: ‘This has disgusted me. The point of the inquiry was to produce truth and justice. Now it appears that we will only get truth at the expense of justice.

‘We should shut the inquiry down until criminal proceedings are done. I don’t see any point in the inquiry now. What is the point of it?

‘What good is finding the truth if there are no repercussions for wrongdoing.

‘I think that there should have been criminal proceedings by now, there is really no excuse.

‘We were told that there were not going to be prosecutions until the inquiry was done so that we knew everything that was needed to know.

‘Moore-Bick’s phase one report said that the cladding was non-compliant … there is your criminal case there.

‘While he was Mayor he closed ten fire stations, axed 552 firefighters’ jobs, and withdrew 14 fire engines from service. The council is also to blame.

‘Part of justice isn’t just rehabilitation, it is about punishment and deterrents and that includes jail.’

3 thoughts on “‘No impunity for London Grenfell disaster corporations’”