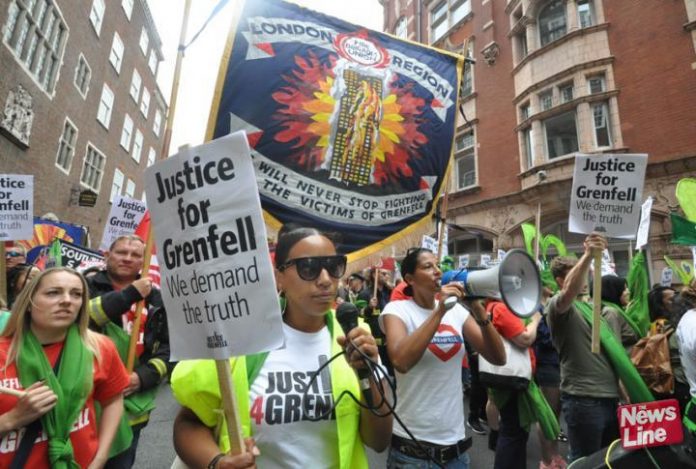 ‘The deregulation of fire safety is essential in understanding how a death trap was created at Grenfell Tower’, writes Matt Wrack, the General Secretary of the Fire Brigades Union (FBU) in his blog which now appears on the FBU website.

Wrack writes: ‘Why was the Grenfell Tower fire allowed to happen? This is the central question that the Grenfell Tower Inquiry must answer. ‘To get to the bottom of the issues, the public inquiry must address the whole fire safety regime and in particular the process of deregulation established over recent decades.

‘Sadly, prime minister Theresa May and inquiry chair Martin Moore-Bick decided that the terms of reference would not explicitly include deregulation, despite advice from the Fire Brigades Union, representatives of the bereaved, survivors and residents, and some other interested parties.

‘If they are serious about “leaving no stone unturned” then we need a wide-ranging public inquiry that takes in the systematic attacks on legislation, so-called “red tape”, privatisation, contracting out – in short, about deregulation.

‘After the Second World War, there were increasing efforts to improve fire safety for homes and businesses in the UK. ‘The 1947 Fire Services Act created a national framework for fire protection and the Central Fire Brigades Advisory Council (CFBAC), which oversaw fire research, equipment, training, fire protection and prevention and all other aspects of fire safety policy. Successive improvements were made to legislation, culminating in the 1971 Fire Precautions Act and the 1974 Health and Safety at Work Act.

‘Thatcher’s election in 1979 heralded a lurch towards deregulation, privatisation and attacks on the fire and rescue service. ‘The Home Office’s Review of Fire Policy (1980) signalled the change of direction towards cuts, even if this meant more deaths, injuries and property damage.

‘This was politely dressed up in Whitehall double-speak: “There may be over provision which may enable judicious reductions to be made which would not result in an unacceptable increase in property loss or casualties.” ‘Tory ministers discussed tearing up the Fire Precautions Act and attacked national standards of fire cover.

‘They part-privatised building control in local authorities, the system where building plans are assessed for compliance with building regulations, including those dealing with fire safety.

‘This change allowed for private, uncertified “approved inspectors” and it started a race to the bottom of cheap, superficial rubber-stamped sign-off of building works.

‘Even the recently published Hackitt review acknowledges some failings with this system. ‘Blair’s Labour governments after 1997 also continued with this deregulation trend. ‘In 2003 they scrapped national standards of fire cover and the CFBAC. ‘This is particularly relevant, since the CFBAC had overseen decades of improvement in fire safety measures, equipment and in operational planning.

‘The Fire Safety Order 2005 scrapped fire certificates and watered down enforcement under the rubric of “better regulation”.

‘This change was seized upon by those who wanted to make cuts.

‘Specialist fire safety departments within fire and rescue services have seen some of the worst levels of cuts in the entire service.

‘It’s all very well, after the event, to raise concerns about the inspection and enforcement role of the fire service, but the skills and trained personnel simply do not exist in sufficient numbers for the scale of the challenge. ‘This process has let landlords and business executives do as they please.

‘It created the context for Grenfell.

‘The Grenfell Tower fire was not the first major fire in the UK where cladding was at fault. ‘In 1973 the Summerland Leisure Centre fire on the Isle of Man killed fifty people and injured 80. Investigators pointed to the role of external cladding in fire spread. ‘The lessons of the Summerland fire were discussed by the CFBAC at the time.

‘On 11 June 1999, a fire at the Garnock Court, a 14-storey block of flats in North Ayrshire led to one death and five injured. ‘Cladding was a significant factor in the fire spread. Regulation was tightened in Scotland, but not in England. ‘The House of Commons Select Committee on Environment, Transport and Regional Affairs conducted an investigation.

‘The FBU submitted a memorandum to the committee and gave testimony. In light of Grenfell, the warning the FBU gave nineteen years ago was shockingly prescient: “The primary risk therefore of a cladding system is that of providing a vehicle for assisting uncontrolled fire spread up the outer face of the building, with the strong possibility of the fire re-entering the building at higher levels via windows or other unprotected areas in the face of the building. This, in turn, poses a threat to the life safety of the residents above the fire floor.” ‘Some MPs (including Jeremy Corbyn and John McDonnell) listened, but most Westminster politicians ignored the warnings.

‘Governments since 2010 have escalated the process of deregulation.

‘Cameron’s “red tape challenge” ran down the importance of regulation and public safety.

‘Together they cut one-in-five firefighter jobs, including control staff and fire safety inspectors.

‘No credible inquiry can ignore these long-term pressures that preceded the Grenfell Tower fire.

‘Firefighters, alongside the bereaved, survivors and residents, want those at the top who made the big decisions held to account and, where appropriate, prosecuted. ‘That means the business owners and landlords who failed to keep their premises safe.

‘It is shocking that a year down the line nobody has been arrested, despite the obvious fact that a death trap was created at Grenfell. ‘We want government ministers held to account for overseeing a deregulatory regime that failed to keep people safe in their homes, surely a basic expectation of public authorities in a civilised society. ‘Only this process of holding to account, alongside a fundamental change in the approach to housing and to fire safety will bring justice for Grenfell.’

Many more would have died in London Grenfell tower block blaze if it wasn’t for Ramadan: ‘These Muslim boys helped us’: here.