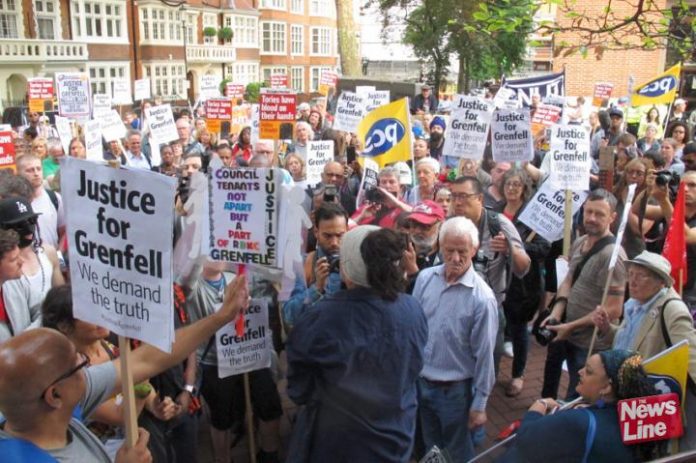 HUNDREDS of residents have received letters confirming Glasgow tower blocks have the very same combustible cladding that rapidly spread the fire in the Grenfell inferno, which claimed the lives of so many men, women and children.

Glasgow has the highest population of tower blocks in the UK, with an estimated 96 high rises due to be refurbished. Initially Glasgow City Council said that there was combustible cladding found on 57 private high rise buildings. Last month the authority said further investigations had reduced that total to 19.

Now Glasgow City Council has written to residents of three separate buildings within Glasgow Western Harbour warning them that the buildings in which they are living contain the same combustible cladding as the Grenfell Tower.

The Grenfell Tower fire occurred on 14th June, meaning that for the past three and a half months these residents have been unknowingly residing in potential fire traps. The flammable cladding: Aluminium Composite Material, known as ACM has been banned in Dubai while Australia is considering a ban on its import today.

SNP council leader Susan Aitken has apologised for not telling homeowners and tenants sooner. This, however, will come as cold comfort to those residents whose lives and the lives of their families have been put in to such serious danger.

The letters state that the developer of their properties has ‘verified that limited ACM is present on the building.’ Dated October 1st it tells residents that they should ‘seek specialist fire safety advice’.

Glasgow residents are already living in fear after reporting regular fires in their own tower blocks.

Almost every resident of Glasgow tower blocks interviewed by Scottish local paper the Sunday Herald said there had been fires in their high rises.

Earlier in the year, a tower block at 30 Kingsway in Glasgow caught alight. It is still blackened by smoke — the damage stretching up eight or more floors. One resident, who lives with her mother on the 18th floor said she could smell smoke and then spotted the fire out of the window.

She remained indoors, was not evacuated and the fire was put out but she was left shaken and in fear of her life. She said: ‘What happened in London is a disgrace. I keep thinking about those babies and wee ones. I’m left terrified and so is my mum. I want out but they won’t rehouse me.’