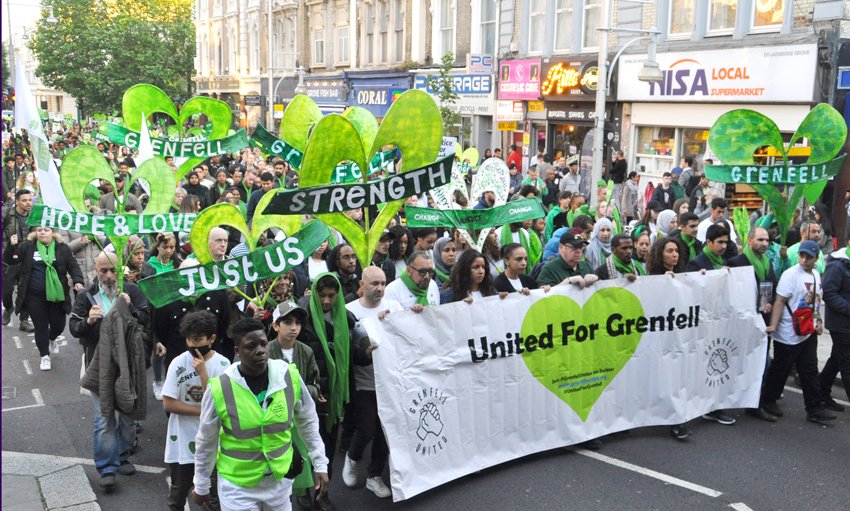 She told News Line: ‘All the things they’ve found out about the cladding makes it clear that those who authorised it should be prosecuted.

‘Also the politicians, locally and nationally, they are responsible too.

‘People are furious and absolutely demanding prosecutions. They’ve got to go to jail.’

Richard Jones, South East Region FBU, said: ‘We are here to remember those who lost their lives. The FBU is in complete solidarity with the people. There are loads of my colleagues here, absolutely loads.

‘It’s a disgrace that nothing has been done to remove the cladding in so many buildings. There are people living in these building completely worried for their safety. The needs of business are being put ahead of safety. It’s got to end.’

Local mother Manao Ahmed said: ‘I live in Magdalen House, just next to Grenfell. I was outside on the night and saw it all. It was horrible.’

Her friend, Zahoor Sharif, said: ‘I saw the people and I couldn’t help. I was crying. I knew three families. Three families of five and they died. Mum, Dad and three kiddies, 15 people. I knew their names.’

Care manager Asia Faraji said: ‘I live just here, up the road. I saw it all, the most traumatic event I’ve seen in my life, absolutely heartbreaking.

‘I believe the council is to blame. There are so many things that the building should have had. In my mind they killed these people. It’s absolutely sad, wasted lives.

‘They should be taken to court, prosecuted and jailed. If it was one of us neglecting health and safety we would have been made to pay for it. And they must pay.’

Sixteen-year-old Harvey Beeker said: ‘My dad woke me up and told me what was going on. I’ve been on most of the marches. We are all very angry. People must be jailed. We used to discuss it a lot but not so much now. But we are still very angry. There will be a revolution.’

17-year-old Jones Vary said: ‘I finished my GCSEs and left school today. On the day of the fire I woke up at midnight and had then had nightmares all night. The politicians should be held responsible, especially Theresa May.’

Val Hampshire, FBU South West Region Regional Treasurer, said: ‘There are hundreds of firefighters here today and they are countrywide. There’s a contingent from Scotland, Northern Ireland and Wales as well.

‘I am incredibly proud of our members who were here on the day and more than that, all public sector workers who deal with such things.

‘The reason we’re all wearing these t-shirts is to highlight the ongoing injustice.

‘To anyone who lives in a high-rise property that’s not properly looked after the bottom line is that the government and the councils need to start thinking about people not profits.’

Just before the 2nd Anniversary Silent Walk set off, famous rapper and poet Lowkey delivered a powerful poem which included the lines:

‘This is a message to the government and I hope it gets through, arrest them before we arrest you.

Supporters of the survivors of the Grenfell Tower fire, gathered opposite Downing Street on Saturday morning for a solidarity march.

Rena Smith told News Line: ‘It think it’s outrageous. They’ve put the inquiry on ice to hope that people will forget about the fire, so that the private companies can get their stories right.

‘This was a crime against all of us.

‘Grenfell was the result of cuts to public services and privatisation and the civil response since has been appalling, for example trying to blame firefighters. Pointing the finger away from themselves.

‘They should absolutely re-house the families, paying reparations to survivors and renationalising public housing so people have safe places to live in.’

There is a podcast interview with Moira Samuels, from Justice for Grenfell, ‘Future Heist’.

A deputation of workers came from Dundee Trades Council. Jim Malone said: ‘We have travelled down in solidarity with the Grenfell community. This is a message from our class. We’re going to remember the dead but fight for the living.

‘We are also holding the establishment to account for this austerity. I’m ex-fire service. I know what death and fire entails. This is a disaster visited on the community by the richest borough in the UK.’

Ian Vincent from Justice for Grenfell, said: ‘It’s a travesty that something like this occurred. Whoever did the testing it was inadequate, and led to lives lost and ruined.

‘The potential for this to happen again is still here. There was a recent fire in Barking. It was cheaper for someone to pay a fine, rather than use the correct materials. Somebody signed off on this cladding re-furbishment, and the contracts and payments – and we want to know who and bring them to account. They put people in unsafe homes.

‘What the council and the government has done is disgusting. There has been little support. Most of it has come from the community. Still people are not housed properly. We just want a decent environment to live in.

‘If it was a more affluent area, it might have been different. People suffered and are still suffering.’

Sam, a school leaver, said: ‘One of the fatalities, Isaac, was a friend of mine. I feel really passionate and angry at Kensington and Chelsea council not doing more to help the families of the victims.’

His friend, Catherine, said: ‘There are over 400 tower blocks with cladding but only 280 are awaiting de-cladding. There are still many without sprinklers or suitable fire doors. This is all about profit.

Pete Smith, Yorkshire and Humberside FBU said: ‘We need to show solidarity with the survivors of Grenfell. Nothing’s changed since two years ago and that’s what we are all demanding. It looks like the inquiry is a government cover-up. Building standards and inspections have been de-regulated to such low standards, it’s got to be reversed.

‘The closure of ten fire stations in London obviously affects turn-out. Even then, anywhere else in the country, they wouldn’t have been able to cope with it.

‘Nationally there have been savage cuts and 20% of the workforce has been cut. The fact that fire deaths are going up is not a coincidence, it’s due to cuts. This government should be investing … Hopefully it won’t be around much longer. We’ll keep fighting till we get the change this country needs.’

Nicola Hawes from Nottingham, said: ‘We did the walk yesterday. I wanted to come and show my support. They’re using the fire brigade as a scapegoat for their mistakes. They’re not doing anything about it.

‘Some people get the impression it’s because Grenfell was social housing. They didn’t listen. Hundreds of buildings are still dangerous for people – but also for the fire service. We can’t do our job.

‘As firefighters we stand firm with the people of Grenfell and hope it never happens again. Our region, East Midlands is doing the silent march next month.’

Moira Samuels from Justice for Grenfell said from the podium: ‘11,000 people last night came to remember. Two years on there is very little progress. There is enormous frustration that the public inquiry will not report till 2020. There is no interim report to phase 1.

‘It’s time to call out this government. We will not continue to wait. We expect to see accountability. We can’t go on with empty promises. Families still want housing, when Theresa May said they would have this within three weeks.’

A London firefighter said: ‘There have been previous fires at Grenfell Tower but they did not spread. Only a month or two after the Grenfell fire there was one at Whitstable House an identical block to Grenfell, which was immediately contained, but it did not have cladding. It’s widely believed that cladding is lethal yet it’s on lots of public buildings like hospitals and schools.

‘The FBU just released the “Never Again Campaign”. There has to be an increase in fire cover and proper fire safety standards restored.’

There was a speaker from the Grenfell Trust and a message from Jeremy Corbyn.

After the march the rally was addressed by Kye Gbangbola, father of Zane, who tragically died, aged 7 as a result of hydrogen cyanide poisoning from a landfill site near his home, and FBU President Ian Murray.