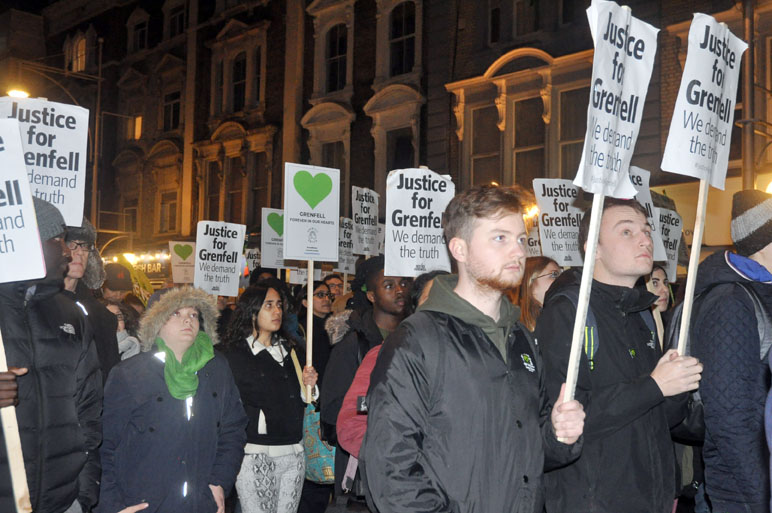 THE COUNCIL responsible for Grenfell Tower made multimillion-pound property deals while cutting costs to the tower’s restoration, it has emerged.

Seventy-two people died when a fire destroyed the tower block in west London, on 14 June 2017.

An investigation has found the Royal Borough of Kensington and Chelsea (RBKC) made £129m selling property in the years leading up to the fire.

It spent £10m on Grenfell’s repair and fitted cheaper cladding than planned.

According to the Local Democracy Reporting Service (LDRS), documents show the zinc cladding originally proposed was replaced with an aluminium type, which was less fire resistant, saving RBKC nearly £300,000.

It is thought the highly combustible material in the cladding was the primary cause of the fire’s spread.

An investigation by HuffPost UK, the Bureau of Investigative Journalism and the LDRS has found that the council had £37m in the bank, specifically from the sale of property, at the time when funding decisions over Grenfell were being taken.

It also bought £61m worth of property from September 2015 to March 2017 while the Grenfell Tower renovation works were under way.

One of the buildings, a former undertaker’s premises in Hewer Street bought for £8.5m, has remained empty since March 2017.

Survivor Edward Daffarn, 56, who escaped from the 16th floor of the tower as it was engulfed in flames, said the investigation has exposed the council’s priorities prior to the fire.

‘The first job of local government is to keep the people safe but RBKC acted more like a property developer than a local council.

‘If they’d been properly focusing on fire safety, rather than focusing on this, then Grenfell might not have happened.’

Joe Delaney, who is on the Grenfell recovery scrutiny committee, said the council’s involvement in property sales was ‘absolutely 100% wrong’.

‘Their job is to serve the public. How is playing property developer serving the public? That’s not what we have councils for.’