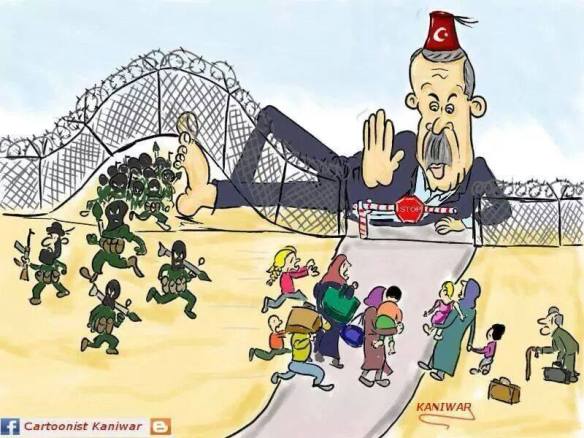 This cartoon shows Turkish President Erdogan on the one hand stopping Syrian Kurdish refugees from fleeing to Turkey, on the other hand letting in ISIS fighters into Syria.

The Turkish Air Force was also in action last night against targets of the Kurdish movement PKK in northern Iraq.

The PKK and their Syrian Kurdish allies were the only effective force preventing the planned massacre by ISIS of the Yazidi minority in Iraq.

From F-16s Turkish pilots fired at air defense and training camps of PKK fighters. Other Kurdish targets were bombarded from Turkish territory.

Turkey for the last time in 2013 waged air strikes against Kurdish positions in northern Iraq.

By the Turkish correspondent of the World Socialist Web Site:

Turkey joins US war in Syria

Over the past two days, Turkey’s government has executed a sharp shift in its foreign policy, aligning itself more closely with Washington’s military strategy in the region and effectively becoming an active part of the US-led “coalition” waging war in Iraq and Syria.

For a long time, Ankara had refrained from supporting the US-led war, ostensibly aimed against the Islamic State in Syria (ISIS), insisting on a policy aimed at toppling the government of President Bashar al-Assad and covertly supporting ISIS, both against the Syrian regime and against Kurdish nationalists.

On Wednesday, however, US President Barack Obama and Turkish President Tayyip Erdoğan agreed in a phone call to work together to secure the Turkish-Syrian border and fight against ISIS.

On Thursday, US officials announced an agreement allowing the US to carry out aerial attacks on IS positions from Turkish air bases at İncirlik and Diyarbakir. The Turkish government also agreed on the arming of the US Predator drones being launched from the İncirlik air base.

According to the Turkish newspaper Hurriyet Daily News, the deal, treated by the Turkish side as a “secret cabinet decree,” also includes plans for a “buffer zone” in northern Syria, something Ankara has long demanded as a means of escalating the war for regime change in Syria.

Gen. John Allen, Obama’s special envoy to the so-called coalition against ISIS, denied this during an appearance at the Aspen Security Forum in Colorado Thursday, saying that it “was not part of the discussion.”

State Department spokesman Mark Toner, however, cast doubt on this denial, stating in Washington that, while the Obama administration has concerns “about some of the logistical challenges inherent in a buffer zone…we obviously take threats to Turkey’s border seriously… So, we’re looking at options,” he said.

If this “option” is included in the deal, Turkey’s entry into the anti-ISIS campaign is being joined with a qualitative escalation of the US intervention in Syria.

A senior US official described the agreement as a “game changer.” The Turkish air bases are much closer to the Syrian border than those in Iraq, Kuwait, Jordan and the Persian Gulf, from which US warplanes have operated until now. This will allow American combat aircraft and drones to respond much faster to intelligence information and attack more frequently. Spy aircraft can stay longer in the air.

Also on Thursday, the Turkish military directly joined the war against ISIS. Tanks and artillery shelled militants across the border. Early on Friday, for the first time ever, Turkish fighter jets attacked ISIS bases in Syria. They hit two headquarters and one “assembly point” of the group, according to the Turkish government. It stated that the decision for the attack was taken at a security meeting on Thursday. Government officials also claimed that no Turkish troops or warplanes crossed the Syrian border during these operations.

While joining the US war against ISIS, Ankara is simultaneously stepping up its offensive against Kurdish nationalist groups, which are openly or tacitly aligned with Washington in the fight against ISIS, and against the social and political opposition inside Turkey.

The Turkish ruling class fears the consolidation of a Kurdish-controlled area in northern Syria by the PYD/YPG, an offset of the PKK, a Kurdish separatist guerrilla group in Turkey. It is combining the fight against ISIS with an ever-growing pressure on the PYG-YPG and the PKK. The so-called “peace process” with the PKK and its imprisoned leader Abdullah Öcalan is considered as good as dead. The government is also attacking the People’s Democratic Party (HDP), the legal Kurdish party that won 13 percent of the vote in the last election, depriving the ruling AKP of its majority.

On Thursday, when the Turkish army joined the war against ISIS, some 5,000 Turkish police officers, backed by helicopters and armored cars, launched raids on suspected ISIS and PKK members in Istanbul and in 13 provinces across Turkey. At least 250 people were arrested and one woman, a member of a leftist organization, was shot.

Prime Minister Davutoğlu said that the government was determined to fight all “terrorist“ groups “without distinction.” He also sharply attacked the HDP, declaring that it is an offshoot of a terrorist organization. Government critics, however, have charged that the majority of those arrested were not members or supporters of ISIS, but rather Kurdish activists, leftists and Turkish political opponents of the government.

The immediate reason given for the shift in Turkish policy is Monday’s terrorist attack in the town of Suruç, where an ISIS suicide bomber killed 32 people and wounded some 100, followed by an ISIS attack on Turkish soldiers at the Syrian border. ISIS militants opened fire, killing a soldier and wounding four, when Turkish authorities did not permit a wounded ISIS member to cross the border for medical treatment, according to the Turkish media.

But the shift in foreign policy was clearly prepared long before. The US-led wars in the Middle East have destabilized the entire region and undermined the neo-Ottoman ambitions of Erdoğan’s AKP to make Turkey a leading regional power.

Early this month, a large delegation from the Pentagon led by General Allen, the US special presidential envoy, and US Undersecretary of Defense Christine Wormuth arrived in Ankara to meet Turkish officials.

Originally Ankara, Washington and its Arab allies worked closely together in undermining the Syrian regime and arming Islamist groups opposed to Damascus. But when ISIS expanded into Iraq and endangered the regime in Baghdad, Washington made a political turn. It bombed ISIS and, much to the dismay of Ankara, aligned itself with Iraqi Kurdish groups. The recent agreement between Iran and the USA further undermines the rapidly declining influence of Ankara.

By joining the war against ISIS and simultaneously escalating the confrontation with the Kurdish nationalist groups, Ankara is trying to win back some influence on the course of events. By doing so, it is escalating the ethnic and sectarian tensions in Syria, Turkey and the entire region, posing a deadly danger for the working class.

A second, no less important, reason for Ankara’s warmongering is the escalating social and political tensions at home. … A member of the HDP was killed by an “unidentified murderer.” The Turkish Prime Minister’s Office stated that the government would take “any necessary measures to protect public order and national security.”

Having lost its working majority in parliament in last May’s election, and unable to form a coalition holding more than half the seats, the ruling AKP is likely to be forced to call another snap election. It fears even greater losses, with anger over the Suruç [massacre] fueling opposition to the government as well as support for the new pro-Kurdish HDP.

Outrage over the Suruç atrocity has led to a number of demonstrations denouncing ISIS as well as what is widely seen as the Turkish government’s complicity with the Islamist group, all of which have been met with state violence.

On Friday, Turkish police in Istanbul using tear gas and rubber bullets broke up a demonstration of several hundred people. The protesters had raised slogans denouncing the ISIS terrorist bombing in Suruç as well as the government for allowing the Islamist group to operate on Turkish soil. A much larger “march for peace” has been called for Sunday by the main Kurdish parties.