During Friday’s sermon, Saudi Cheikh Mohamed Arifi appeals to Muslims for Jihad for Allah’s sake against the Syrian army and to join the Free Syrian Army. The latter consists predominantly of Jihadis (Mujahideen) and committed many atrocities against civilians.

“First, I fled from Assad, now from the Free [Syrian] Army’

REPORT: Two years ago the Free Syrian Army was considered to be the apple of the eye of the West. But moderation has gone away in the FSA long ago. The fighters are becoming more Islamic.

I would not say ‘Islamic’; rather ‘Islamic in a fanatical, violent sense’, somewhat like the rulers of Saudi Arabia, Qatar and the so-called ‘Islamic State’ of ISIS.

Among the population, they are known as murderers and looters.

Laila is 24 years old. Her district in Aleppo is bombed day after day. Not by the Syrian regime, but by the Free Syrian Army (FSA) that targets government districts in the city. “It’s a kind of explosive barrels, filled with gas,” Laila said in a café in the Turkish border town of Hatay. She fled to there three months ago. Because she still has family in Aleppo, she prefers to keep her surname secret.

The FSA bombs are intended for military purposes, but mainly cause many civilian casualties. “They land in the middle of the street, but also regularly on buses and houses,” says Laila. “A first bomb is always followed by a second one and a third one. You never know where you’re safe. I always sat on the stairs and waited there.”

Three months ago, disaster struck. Her house was hit. Laila narrowly escaped death. That was the time for her to leave for Turkey. “It’s actually quite ironic,” she says. “At the beginning of the war, I was fleeing from the regime. Now I fled from the FSA.”

Two years ago the FSA was still idolized by the population in opposition areas. It was the only serious group fighting against the regime of Bashar al-Assad. Meanwhile, the fighters are known as looters and murderers. The stories are numerous, although they are difficult to check: FSA fighters pilfering food packages intended for the people, houses of displaced Syrians robbed and expensive cars stolen and resold.

The FSA is not only facing an image problem, but has also been weakened militarily. The “apple of the eye of the West” has disintegrated into dozens of splinter groups, each operating under its own name and flag. Chaos reigns. While two years ago, there was a cry for “freedom” and “democracy”, now they are calling for the introduction of sharia.

The moderate FSA is no longer, say sources the Volkskrant spoke to during three weeks at the Turkish-Syrian border. “Friends around me were increasingly clinging to religion,” says Ahmed Akidi, a 18-year-old FSA warrior and son of the powerful rebel commander Abdul Jabbar Akidi. “The FSA becomes more Islamic day after day.”

Laila from Aleppo tells how a friend of her renounced his love for hard rock music and girls when he joined the FSA. “I was told that I had better not call him, because his faith did not allow that he had contact with a woman.”

According to Ahmad al-Halabe (25), a native of Aleppo, it is no wonder that in recent months reportedly four hundred fighters have defected to the terrorist group Islamic State (ISIS) and the Al Qaeda-affiliated Al-Nusra Front. “It is easier to fight for a group with a clear ideology than for a group that has lost its right to exist.”

Al-Halabe fought last year for a few weeks for the FSA in Aleppo. He stopped when he noticed that it was a motley crew. “There was no leadership, there was often shooting at random. Everyone was exhausted, the force was weakened”, he sums up the situation.

According to Ahmed Akidi, still fighting for the movement, during the last two years it has certainly lost half of its fighters. They have lost their faith in a victory over the regime, are frustrated by the lack of leadership or are put under pressure by their family to stop.

Also, the much reduced salary plays a role. …

Army leaders of the FSA blame the very bad financial state on the West, said to not fulfill its promises. Of $ 10 million pledged this year only 20 percent is said to have been paid. Of light weapons and ammunition is an even smaller proportion (around 10 percent) is said to have been delivered. The result is, according to Akidi, that the FSA is completely dependent on sponsors, particularly from Saudi Arabia and Qatar. “These are wealthy individuals who each fund their own battalion. FSA is thus fragmented into groups, each with their own agenda.”

Not the fighters themselves, but the sponsors determine what moves are made on the battlefield, said Ahmad al-Halabe. “They really decide everything. On who is being shot, where, when. Combatants are obliged to send evidence in the form of videos and photos. If the orders are not executed properly, then the aid is stopped.”

According to Akidi the sponsors have a twofold objective: to defeat Assad and to spread Islam. The FSA is much more malleable than highly organized movements like ISIS and Al Nusra. That makes them easy prey.

Some factions of the FSA receive financial support this year from the United States of America. 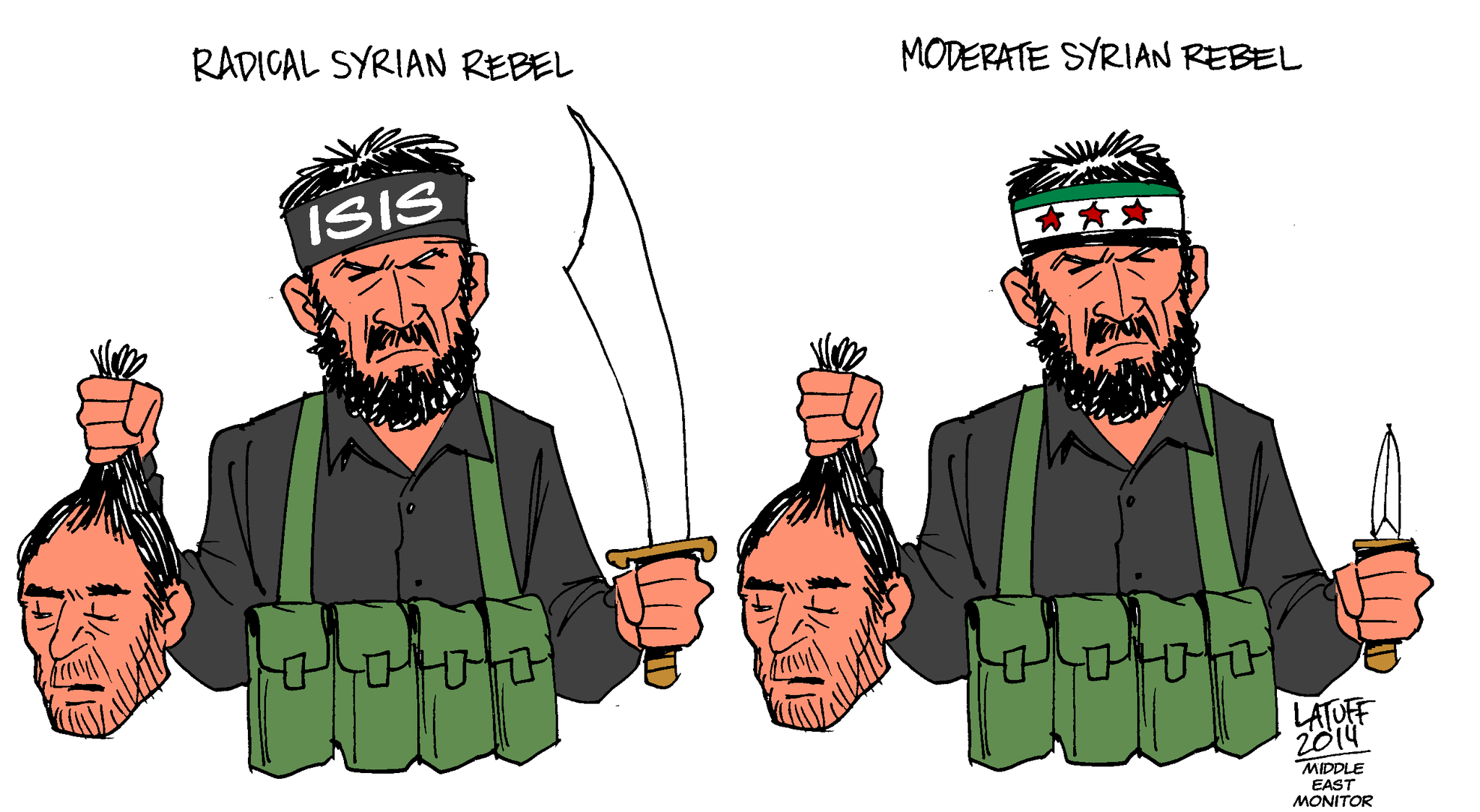 How did the Syrian uprising become dominated by jihadists? Here.

Saudi Arabia is right to be anxious over its ideological links with Isis. The Saudi authorities have condemned Islamic State, but they fear the destabilising effects of any detailed examination of their shared principles: here.

Just 60 Syrian rebels are receiving training from the US Army to fight Isis, it has emerged. Initial plans hoped for up to 5,400 recruits in a year: here.

A brigade of the Free Syrian Army (FSA, Free Syrian Army) has joined the SDF ( Syrian Democratic Forces). … The Union of Free Officers announced they were leaving the ranks of the FSA and joining the self-defense forces. Their representatives expressed a strong aversion to the type of Islam that has been permeating the FSA: here.

156 thoughts on “‘Free Syrian Army, more and more like ISIS’”