This decision, which reportedly followed a telephone conversation between Trump and Turkish president Recep Erdogan, opens the way for Turkish forces to storm in and carry out Erdogan’s long held wish to smash the Kurdish forces that have long spearheaded the war against ISIS.

The Kurdish People’s Protection Units (YPG) have been the fighting backbone of the Syrian Democratic Forces (SDF), 11,000 of their troops were killed fighting ISIS which was backed by Turkey.

The SDF fought and defeated the Islamic State terrorists and were hailed as ‘allies’ by US imperialism, but on Sunday they were unceremoniously dumped and the way opened for Turkey to send in troops to carry out the massacre of Kurds.

Since August there has been a buffer zone operating between northern Kurdish-controlled Syria and the border with Turkey which is patrolled jointly by US and SDF troops.

This buffer zone was established as a sop to Erdogan – who regards the Kurdish YPG as a terrorist organisation – and a guarantee that there would be no military incursion into Turkey by Kurdish forces.

Equally, it was a guarantee by the US that Turkey would not invade Syria and take on the Kurds and smash them.

The SDF reported yesterday morning that US troops had already started to pull out along the border with Turkey, with SDF spokesman, Mustafa Bali, accusing the US of leaving the area to ‘turn into a war zone’.

Now US imperialism is so weak after a never-ending stream of defeats in the region that Trump has decided to pull the plug on the Kurds and abandon them to their fate.

The Kurds are learning the hard way that US imperialism has no allies; they were just cannon fodder to be used in the war to overthrow the Assad regime.

In a statement, the SDF said they would defend themselves against ‘Turkish aggression’ and they called on all sects, including Kurds, Arabs and Syrians, to join them.

Nearly a year ago Turkey launched an attack on Kurdish forces in the northern town of Manbij following Trump’s earlier promise to pull US troops out of Syria completely. The Kurdish response to this attack was to invite the Syrian army to enter the town as they are ‘obliged to protect the same country, nation and borders.’ …

The attempt by imperialism to drive regime change through creating sectarian divisions and breaking Syria up – as they did in Libya – was decisively defeated. Now, with the US admitting its defeat and Trump ordering a humiliating retreat, Turkey is stepping in to invade and occupy Syrian sovereign territory. …

The working class in the US, Britain, Europe and Turkey must stand with the Kurds and Syrian people in demanding the immediate withdrawal of all Turkish troops from northern Syria.

TRUMP HIGHLIGHTS CONFLICT OF INTEREST Trump revealed how he would handle Turkey and Syria in a Breitbart News interview during his presidential campaign. “I have a little conflict of interest ’cause I have a major, major building in Istanbul,” Trump boasted at the time. “It’s a tremendously successful job. It’s called Trump Towers.” [HuffPost]

GRAHAM: WHITE HOUSE TOLD ME TO BLOCK ARMENIAN GENOCIDE RESOLUTION Sen. Lindsey Graham (R-S.C.), who was excoriated as “spineless” and “despicable” for blocking a Senate resolution to formally recognize the Armenian genocide, told Axios Sunday that he’d cast the vote at the behest of the White House. [HuffPost]

NATO Secretary-General Jens Stoltenberg met with Turkish Foreign Minister Mevlut Cavusoglu in Ankara to discuss the military alliance’s operations in the region, Thursday. The NATO boss said “we have seen a significant reduction in the numbers” of refugees crossing into Europe since the implementation of plans to stem the migratory flow.

SOT, Turkish Foreign Minister Mevlut Cavusoglu (Turkish): “In terms of the PYD and YPG, we have provided information to the distinguished Secretary-General on what kind of terrorist organisations they are and that there is no difference between the PKK and these organisations.”

NINE trucks loaded with armoured vehicles and one bus carrying military personnel have been sent to the border district of Akcakale, in the southeastern province of Sanliurfa, Turkey’s state-owned Anadolu Agency confirmed late on Saturday (October 5th). Turkish President Tayyip Erdogan says his country will carry out air and ground military operations in northeast Syria east of the Euphrates. The convoy was sent to reinforce military units based on the Syrian border, Anadolu said: here.

By Alex Lantier and Ulaş Atesci:

Sunday night, in a major shift in US war policy, the White House has given a green light for a Turkish invasion of northern Syria. It has abandoned to their fate Kurdish nationalist militias that have fought since 2015 as Washington’s main proxy force in the NATO war in Syria, and which the Turkish government denounces as terrorists to be bloodily suppressed.

After Trump called Turkish President Recep Tayyip Erdoğan, the White House issued a statement at 11 p.m. Sunday declaring: “Turkey will soon be moving forward with its long-planned operation into Northern Syria. The United States Armed Forces will not support or be involved in the operation, and United States forces … will no longer be in the immediate area.”

Yesterday, as US troops withdrew from positions along the Turkish-Syrian border, Erdoğan said the Turkish attack could begin anytime: “We made a decision. We said, ‘one night we could come suddenly.’ We continue with our determination. … It is absolutely out of the question for us to further tolerate the threats from these terrorist groups.” 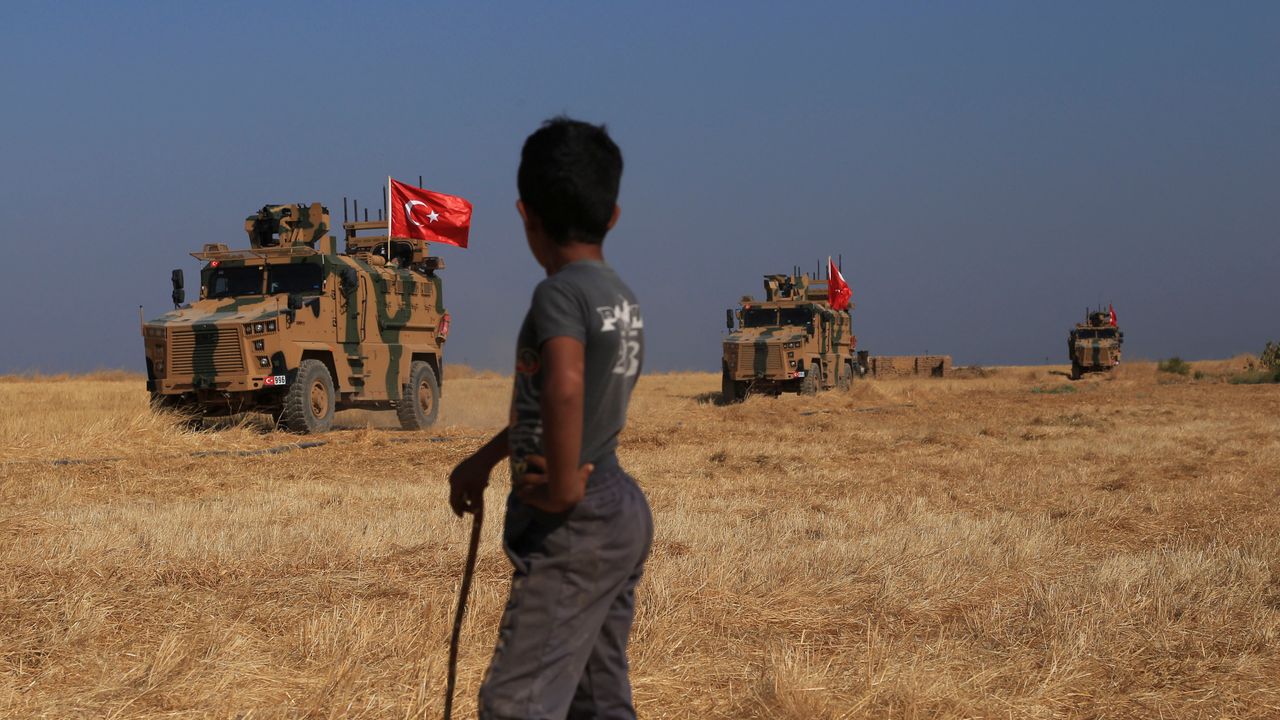 With US approval, the Turkish government is preparing a bloodbath against Kurdish forces in Syria. Washington and Ankara have agreed that Turkish troops would control a zone in northern Syria 30 kilometers deep, along 480 km of the Turkish-Syrian border (19 by 300 miles). Ankara plans to forcibly resettle in this zone 1 to 2 million of the 3.6 million Syrian refugees who fled to Turkey during the eight-year NATO proxy war in Syria, and has threatened to pursue its offensive outside this zone if necessary.

US troops are reportedly withdrawing from a 100 km stretch of the border from Tal Abyad to Ras al-Ain to allow Turkish troops to attack through this gap. However, the BBC reported that in light of Ankara’s threats of a broader invasion, “British and American special forces have for months been making preparations for a partial or full withdrawal from the area if the situation escalates.”

The Kurdish-led Syrian Democratic Forces (SDF) militia called on Kurds to “defend our homeland from Turkish aggression,” pledging “all-out war along the entire border.” SDF spokesman Kino Gabriel denounced the White House statement as a betrayal: “The statement was a surprise, and we can say that it is a stab in the back for the SDF.”

The SDF, who have only 60,000 fighters against the Turkish army’s 402,000 heavily-armed active personnel, added they had received “assurances from the US that it would not allow any Turkish military operations against the region.”

In fact, having built up and armed the SDF for its regime change war in Syria, Washington is now coordinating closely with Ankara the crushing and massacring of its Kurdish “allies”. In a barrage of tweets commenting on his decision yesterday, Trump made clear that he intended to have the final say on what Turkish troops attacking Kurdish militias could and could not do.

Trump wrote, “As I have stated strongly before, and just to reiterate, if Turkey does anything that I, in my great and unmatched wisdom, consider to be off limits, I will totally destroy and obliterate the Economy of Turkey (I’ve done before!). They must, with Europe and others, watch over the captured ISIS fighters and families. The US has done far more than anyone could have ever expected, including the capture of 100 percent of the ISIS Caliphate.”

A US-backed Turkish invasion of Syria to massacre Kurdish forces would be a horrific crime, and a major escalation of violence in a region bled white by decades of imperialist occupations and proxy wars, from the first US-led war against Iraq in 1991 to the NATO wars in Libya and Syria launched in 2011. It comes only months after Trump called off air strikes on Iran 10 minutes before they were to proceed, to retaliate for Iranian forces downing a US drone in their airspace.

With Iran and Russia already involved in Syria to back President Bashar al-Assad’s regime against NATO-backed proxy militias, the longer-term danger of military escalation into direct conflict between major world powers is still posed. The Syrian government has repeatedly denounced Turkish plans to invade and occupy Syrian sovereign territory. …

Already last December, aware of deep anti-war sentiment in America and fearing a devastating collapse of relations with Turkey, Trump announced a withdrawal of the few thousand US troops working with the SDF in Syria. His decision was countermanded by the Pentagon, and provoked a firestorm of criticism from Republicans and Democrats alike in Washington. Ultimately, US troops remained in Syria, and conflicts between Ankara and Washington continued to escalate.

Trump has now worked out another deal with Erdoğan, as the war crisis and the internal crisis of his administration have reached new heights. After Trump called off strikes on Iran and fired a top proponent of war with Iran, National Security Advisor John Bolton, he was targeted for impeachment by powerful factions of the ruling class and foreign policy establishment, led by the Democratic Party.

The crisis over Trump’s latest withdrawal order from Syria reflects the reactionary conflict over foreign policy underlying the impeachment drive. The order provoked wide condemnation from Trump’s opponents, and even some of his Republican supporters, like Senator Lindsey Graham. …

As for Trump, he is endorsing the politically criminal policies of Ankara. This includes an attempt to forcibly populate the strip of Syrian territory it would occupy with millions of Syrian refugees, most of whom are Arab. This reactionary plan, aimed at preventing the consolidation of a Kurdish statelet within Syria, involves forcing millions of Arab civilians into a war zone and risks creating a lasting conflict between them and the local Kurdish population.