Thousands protest against Trump in Brussels ahead of talks

Thousands of protesters carrying effigies of Donald Trump march through Brussels after the US president arrived for talks with the EU and NATO.

Thousands of protesters carrying effigies of Donald Trump have marched through Brussels after the US president arrived for talks with the EU and NATO. The demonstrators condemned Trump’s policies including his recent ratcheted-up anti-Iran rhetoric. 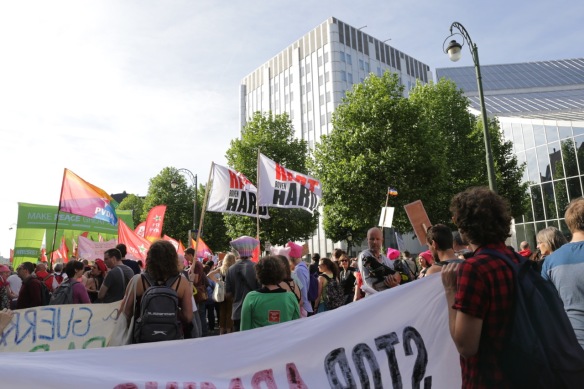 The many flags proceeded. On this photo flags of the Belgian ‘Hart boven hard’ (Heart above hardness) anti-austerity movement. And, on the left, the rainbow flag of the LGBTQ branch of the leftist Belgian PVDA party. Between the PVDA flags, also on the left of the photo, the Greenpeace ‘Make peace great again’ banner. Not on the photo, but present, an anarchist flag.

There was a lively group of Redfox, the PVDA young people’s organisation, with their spoof ‘Donald Trump’ on his vehicle.

And, of course, more pussyhats. 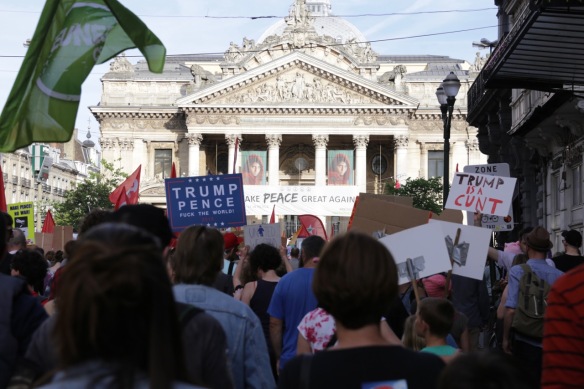 The demonstration arrived at the Brussels stock exchange building. It had been adorned with a banner with the slogan ‘Make peace great again’.

And with a well-known photo of an Afghan girl who had been mutilated. That photo had been abused for war propaganda, contrary to what had really happened to that girl. Here, it was in its proper context, a warning against the horrors of war.

When people came closer, they could read the small print on the ‘Make peace great again’ banner. On top, five CND peace signs. At the bottom: Invest in peace. StopNATO2017.org. #Resist. Greenpeace.

As the demonstration continued, it turned out that there were not just banners on the stock exchange building. People, eg, had hung banners like this one from their homes. It said: ‘Fight Trump and his billionaire friends. They have the money. We have the people.’

Also, many people, at their windows and on their balconies, applauded and cheered for the demonstration. 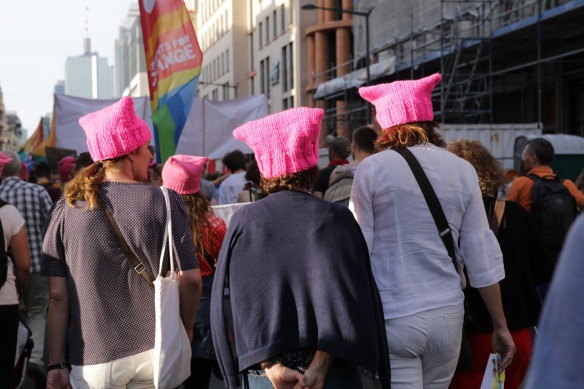 The march continued. With, of course, yet more pussyhats. 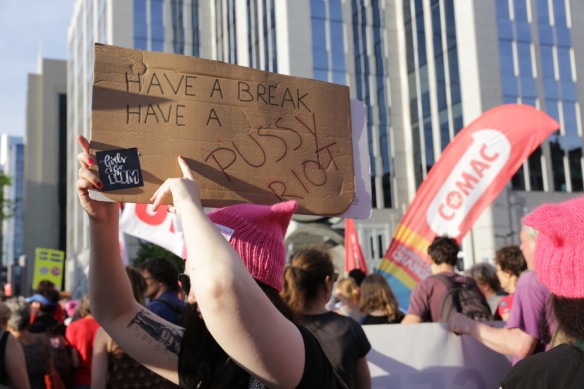 The trees showed us we were almost back at where the march had begun. One more slogan: ‘Change the system to save our planet‘.

We arrived back, at the square and pond near Brussels North railway station.

After the march was finished, Belgian band Jaune Toujours made music. I did not hear or see much of them, as our bus had to go back. So, just this video.

This short music video from Brussels is called Jaune Toujours live @ Trump not welcome… 24 May 2017.

There will be more about this demonstration on this blog, especially videos.