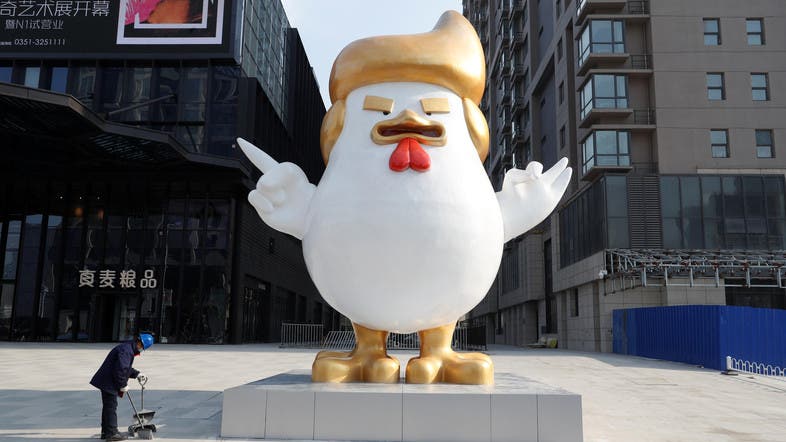 A factory in eastern China is racing to keep up with demand for its new clutch – giant inflatable rooster balloons that bear what some say is an uncanny resemblance to US President-elect Donald Trump.

The Zhejiang-based factory has already produced 30 of the inflatables, some of which are up to 20 meters (65.6 feet) in height, and all sporting puffed-up combs of gold.

Li Haiyan, manager at Caile Inflatable Products Co, said he still has plenty of orders to go before the Lunar New Year arrives on Jan. 28.

The likeness to Trump is pure coincidence and unintended, Li said, and many Chinese will only associate its appearance with that of this year’s zodiac animal – the rooster.

Li would not say where the inspiration for the design came from, but local media have commented on the inflatables’ remarkable likeness to a statue that appeared in front of a shopping mall in northern Shanxi province in late December.

Seattle-based US graphic artist Casey Latiolais, the statue’s designer, said he was commissioned to produce something rooster-like but agreed there were some similarities.

“I can definitely say Mr. Trump has a lot of similarities in that he likes to tweet,” Latiolais said.

“And he also likes to tweet at or around sunrise, and if you take away the fact that roosters are kind of loud and self-absorbed, then I think you can start drawing similarities that way.”

China is paying close attention to Trump as he takes the reins on Jan. 20.

During his election campaign, the billionaire and former reality show star took an aggressive tone with China, blaming Beijing for US job losses and vowing to call China a currency manipulator on his first day in office.

“Maybe the meaning (behind the statue) is in that 2017, the year of chicken, there will be a bigger and better breakthrough in diplomacy (between the US and China),” said Taiyuan resident and teacher Wang Hainan.

5 thoughts on “Year of the Trump Rooster in China”