This Euronews video, recorded on 24 May 2017, says about itself:

Thousands of protesters took to the streets of Brussels on Wednesday ahead of a NATO summit in the city.

In an earlier blog post, I mentioned that the big 24 May rally against Donald Trump and NATO militarism near the northern railway station in Brussels, Belgium, was over and the march of over 12,000 demonstrators through the city center had started, to the sound of a drum band. 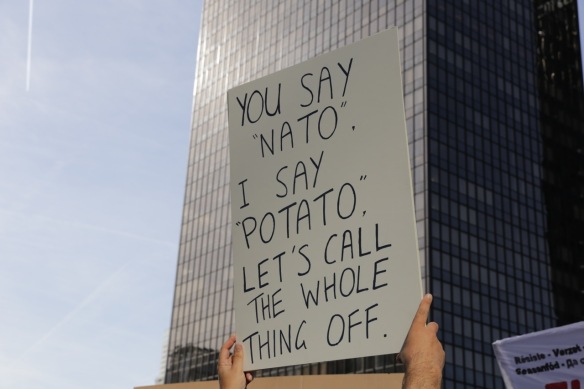 As I mentioned, there was a demonstrator’s sign saying ‘You say NATO/I say potato/Let’s call the whole thing off’. A parody of a song by George and Ira Gershwin, from 1937: “Let’s Call the Whole Thing Off“. Here it is on the photo.

And on this photo, along with other anti-Trump signs.

Another sign said: ‘Trump, stay the hell out of our hole’; a reaction to Donald Trump calling Brussels a ‘hellhole’.

Yet another sign said: ‘Invest in peace, not in war’. It was not far from a parody ‘Donald Trump’ and, again, pussyhats.

There were people in green t-shirts of the Christian trade union federation.

And another one: ‘Pro America. Anti Trump’. 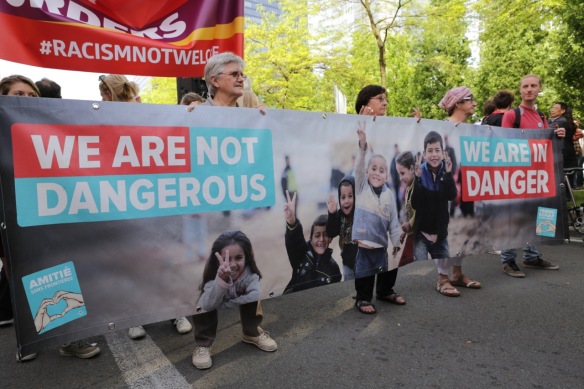 Refugees and their supporters were present as well. Slogans were shouted like ‘Say it loud, say it clear, refugees are welcome here’.

Above the demonstrators, flags like of the Dutch Socialist Party with their tomato and star pictures.

Slowly at first, because of the relatively narrow crowded street, the demonstrators, including the mock ‘Donald Trump’ on his vehicle, and the Greenpeace banner, proceeded.

So did the many flags.

There will be more on this march on this blog. Stay tuned!