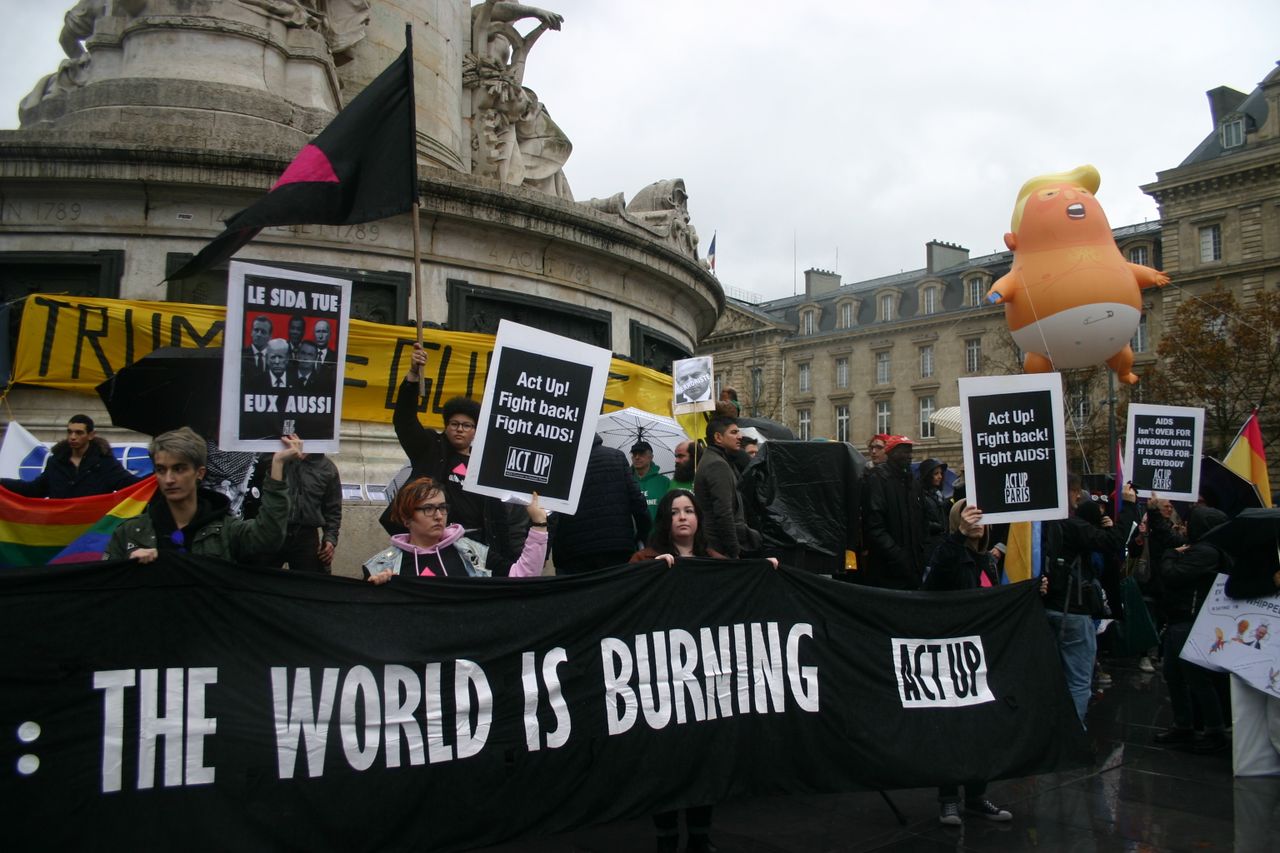 As Donald Trump, French President Emmanuel Macron and 70 other heads of state met in Paris on Sunday, thousands of people demonstrated on Republic Square to show their opposition to the US president and to imperialist wars being waged today. WSWS reporters interviewed the protesters, who also spoke out against Macron’s recent call to honor the military career of France’s Nazi-collaborationist dictator, Philippe Pétain.

One protester, Simon, criticized the hypocrisy of political leaders praising peace in Paris while waging war from Afghanistan and Syria to Mali, and the silence on the role of the October 1917 revolution in Russia and the revolutionary uprisings of the German workers in ending the war.

He said, “We are greeting a few kilometers from here the world’s five biggest arms dealers, who are spouting phrases about peace and hiding the fact that what ended World War I was the German revolution. It was the workers and working people of Germany who carried out a revolution. It was not ended via a military victory. And then they were made to pay for it afterwards, with the punitive Versailles peace treaty. So it is important for us to show, about the people who are waging war across the world but who claim to praise peace, it’s a fictitious peace.”

He stressed that it was not simply a matter of simply protesting against Trump: “Trump is continuing the policies of his predecessors, he is a bit more violent and he goes further than they did, but it is in continuity with the policy of Bush and also of Obama.”

Simon added that it is “repulsive” for Macron to legitimize Pétain, and that Macron is continuing the strategy of right-wing President Nicolas Sarkozy, who also tried to attract votes and support from the neo-fascists in order to provide a limited popular base for war and austerity policies.

He stated, “I came to demonstrate against Trump, [Turkish president Recep Tayyip] Erdogan, [Russian president Vladimir] Putin, and [Israeli premier Benyamin] Netanyahu, basically the war criminals that are waging war in many countries around the world. And also against Macron’s current policy which is to collaborate with these powers. It is the same policy the French state has carried out for many years. … It is important for us to be here to show our opposition to what is happening.”

He also stressed his opposition to Macron’s attempt to rehabilitate Pétain under cover of hailing his role as a World War I general: “There is not a Pétain of World War I and a Pétain of World War II, it is all one man. … He is, when all is said and done, a representative of the bourgeoisie. The fact that Macron applauds him shows that Macron feels a tacit sympathy for the fascist past, and the fact that he is greeting Trump today shows that he does not care about democracy.”

Asked about the link between Macron’s repudiation of the post-war trial of Pétain and his repudiation of the social rights established in the struggle against Nazi Occupation—with the privatization of the National Railways and attacks on pensions and public health care—he replied: “Ultimately, it’s logical and we sort of expected it. It is the continuation of the policy carried out in France for the past 40 years. He knows the workers will be the first to struggle, so he attacks the workers first of all.”

He was indicating here the austerity policies imposed by the Socialist Party (PS) during PS President François Mitterrand’s “austerity turn” of 1982-83, when the PS was ruling in coalition with the PCF. Asked about it, he did not try to defend … his party.

He said, “The Socialist Party opted for austerity, with the PCF. But then the PCF left government a year later, let’s not forget history.”

Finally, the WSWS spoke to Guilherme, a Brazilian working in Paris, who discussed the recent election of Jair Bolsonaro, a fascistic defender of the 1964-1985 Brazilian military dictatorship. He said, “I feel a lot of sadness for everything that has happened; seeing him elected president of my country pains me, given all the things he has said.”

Guilherme added, however, that he does not believe that Bolsonaro enjoys deep support in Brazil, and that he will ultimately encounter deep opposition from workers: “The Brazilian people had enough with a system that did not work. … As I see it, it was possible for voters to see Bolsonaro as a way of exiting from politics as usual, a way to change things. But I do not think this will last in the long term. There will be pretty serious consequences, most of his voters did not realize what they were doing.”