This 29 November 2018 video from Australia says about itself:

Thousands of Australian students have defied calls by the Prime Minister to stay in school and instead marched on the nation’s capital cities, and some regional centres, demanding an end to political inertia on climate change. Read more here.

Thousands of students walked out of high schools around Australia yesterday to voice their concern and anger over the worsening degradation of the global environment and oppose the refusal of governments to address climate change.

The rallies were the largest involving secondary school students in many years. They expressed the developing politicisation of a generation that has grown up amid continuous war, growing inequality, worsening environmental destruction and a turn to authoritarianism, presided over by all the official parties …

Socialist Equality Party (SEP) supporters distributed hundreds of copies of a statement by its youth wing, the International Youth and Students for Social Equality (IYSSE), titled: “To stem climate change, capitalism must be ended.” 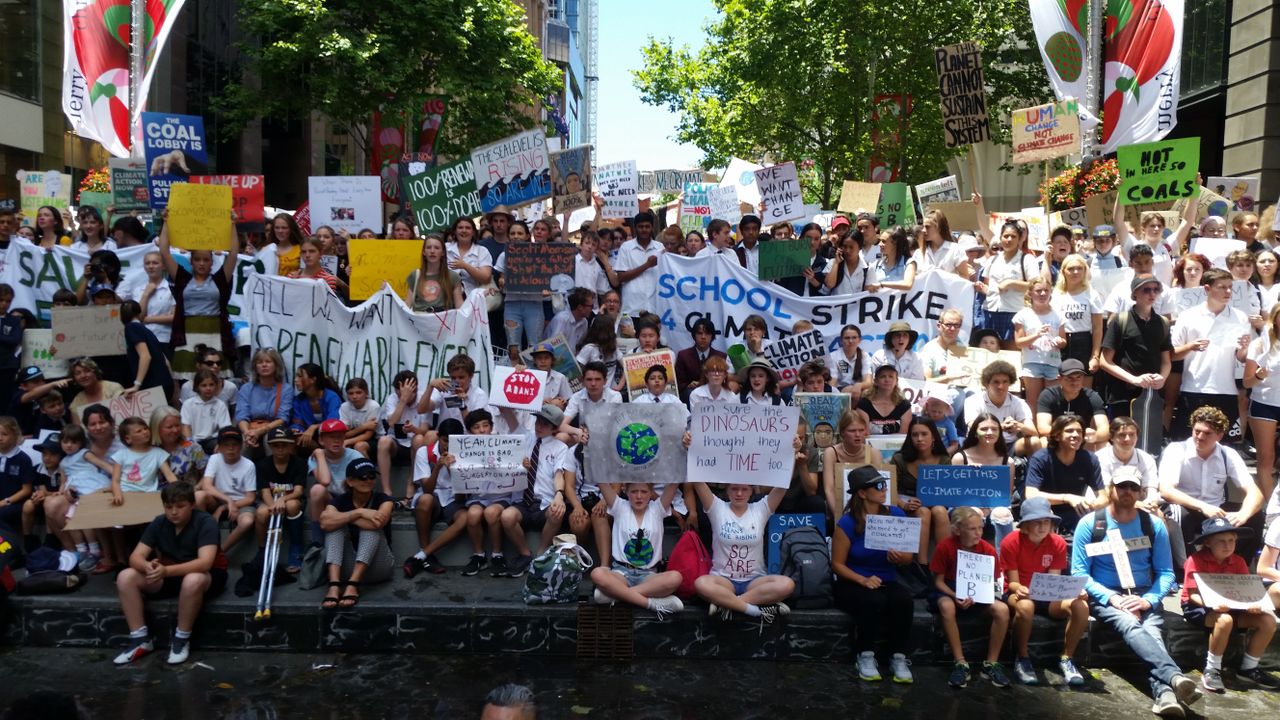 Resources Minister Matt Canavan declared that students participating in the strike were learning only “how to join the dole [unemployment] queue.” They would end up “in a line asking for a handout, not actually taking charge of your life and getting a real job.” His remarks echoed Prime Minister Scott Morrison’s earlier condemnation of students for walking out of schools.

There is intense concern in ruling circles that, amid widespread hostility to the parliamentary set-up, any expression of social opposition among youth could spark a broader movement against capitalism.

Student speakers in Sydney and Melbourne reviewed many aspects of the environmental crisis, including climate change, the deterioration of the Great Barrier Reef, extended bushfire seasons and drought. They condemned plans by Adani, an energy multinational, to establish a large new coal mine in Queensland, with the state’s Labor government support.

WSWS correspondents interviewed a number of students, who spoke of wider concerns about the state of society and the future of human civilisation. 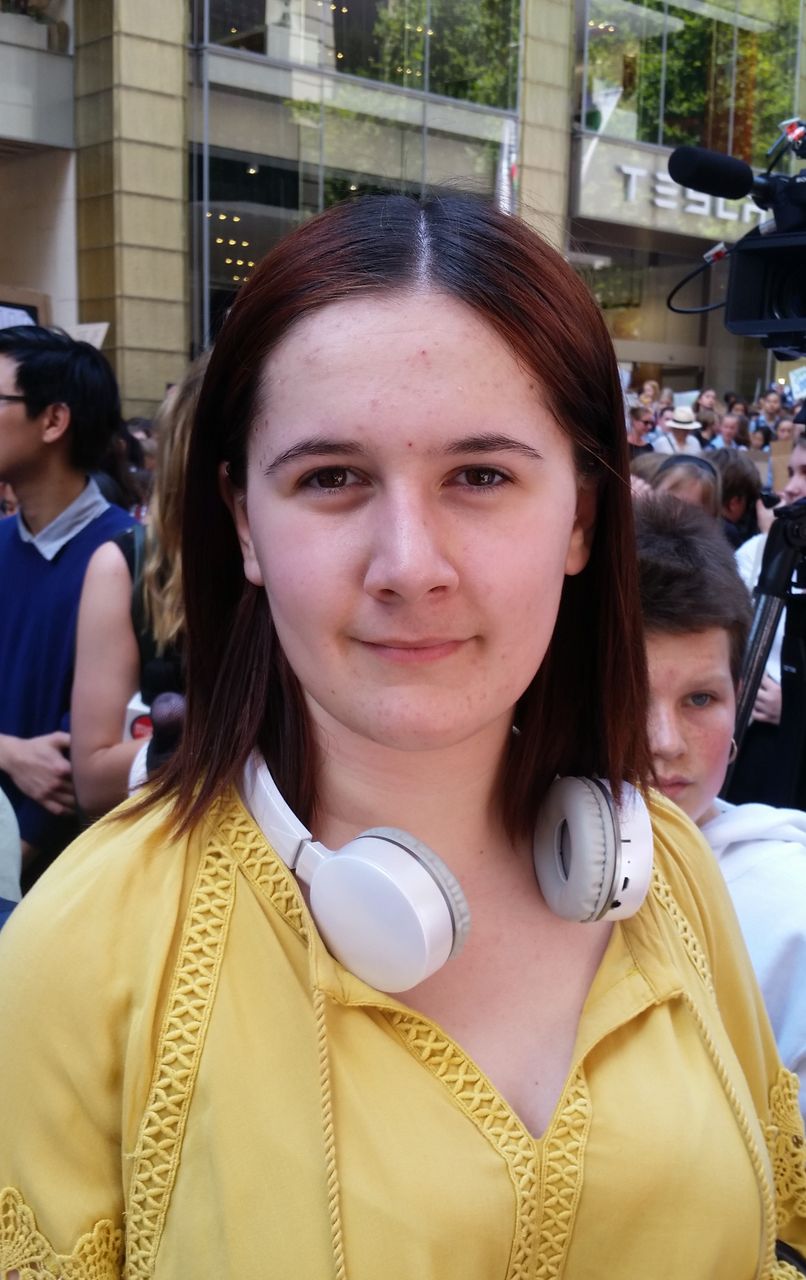 Melissa, 17, explained: “I’ve come today because I care about humanity and I want to see it survive. Our generation is going to be around for a long time. But that’s only if we don’t destroy our planet. There’s no ‘Plan B’. there’s nowhere else humanity can go that will support life, so this is our only chance.

“I am in some ways a communist. The actions of governments are all based around profits and big corporations lobbying. That’s why our politicians aren’t going to change anything. The corporates and big business have a lot of money, so they’re the ones in power. It’s all of the parties, including Labor. No one who actually cares about the environment, or anything that isn’t about money, is in politics.

“I’m very strongly against nuclear weapons. I want to see them taken down as soon as possible. Because they are the number one way that humanity could be killed off right now.”

Xavier, 12, said: “I’m here because Scott Morrison is an idiot and we need to save the world for people in the future. Our generation is going to see the effects of climate change. If we don’t stop it now, we could all die when we’re 50 years old.

“The current system is corrupt and we need to fix it as soon as possible. I think everyone should get the same pay and everyone should be equal. Everyone should have a home, enough food and clean water. We’ve got to get rid of the situation where rich people get huge salaries. That’s the only way everyone can be equal.” 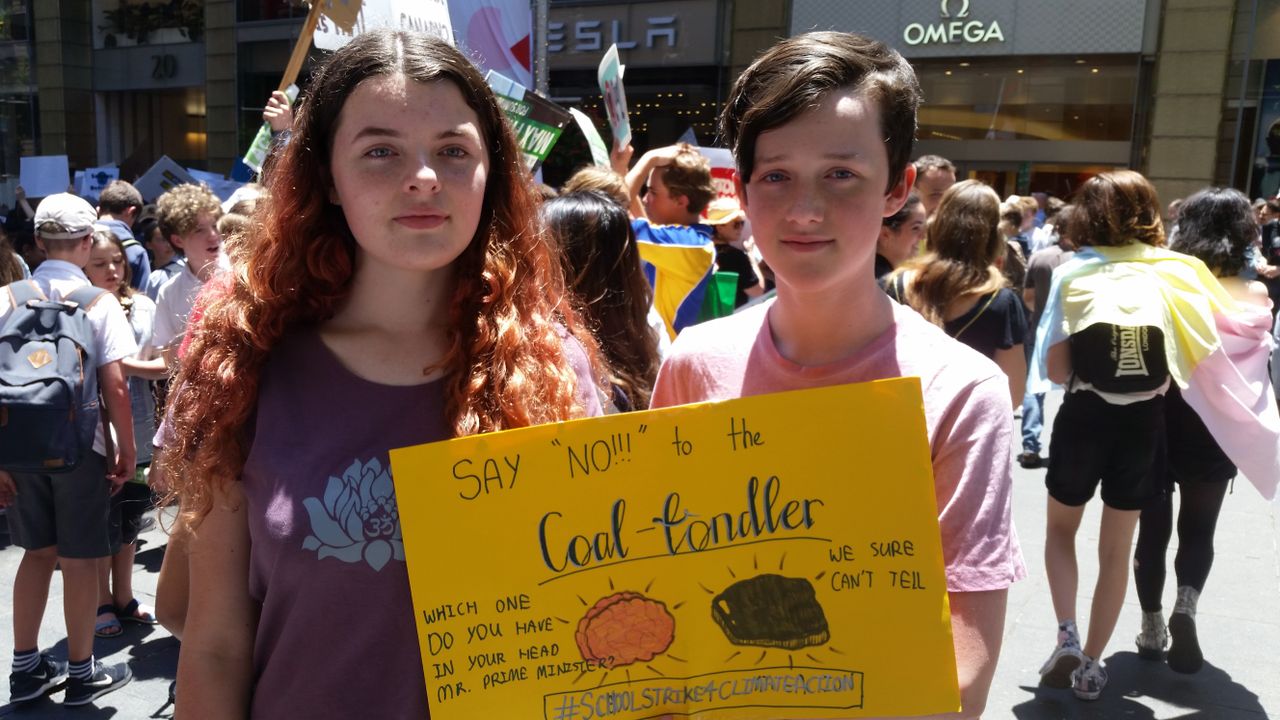 Sylvie, 14, commented: “Climate change is largely ignored by the governments. We’re not doing enough to stop it. I think a lot of governments, including here, don’t even believe that climate change exists, even though the evidence has been put before them. But it’s also because they profit from coal, and they don’t want anything to stop that.” 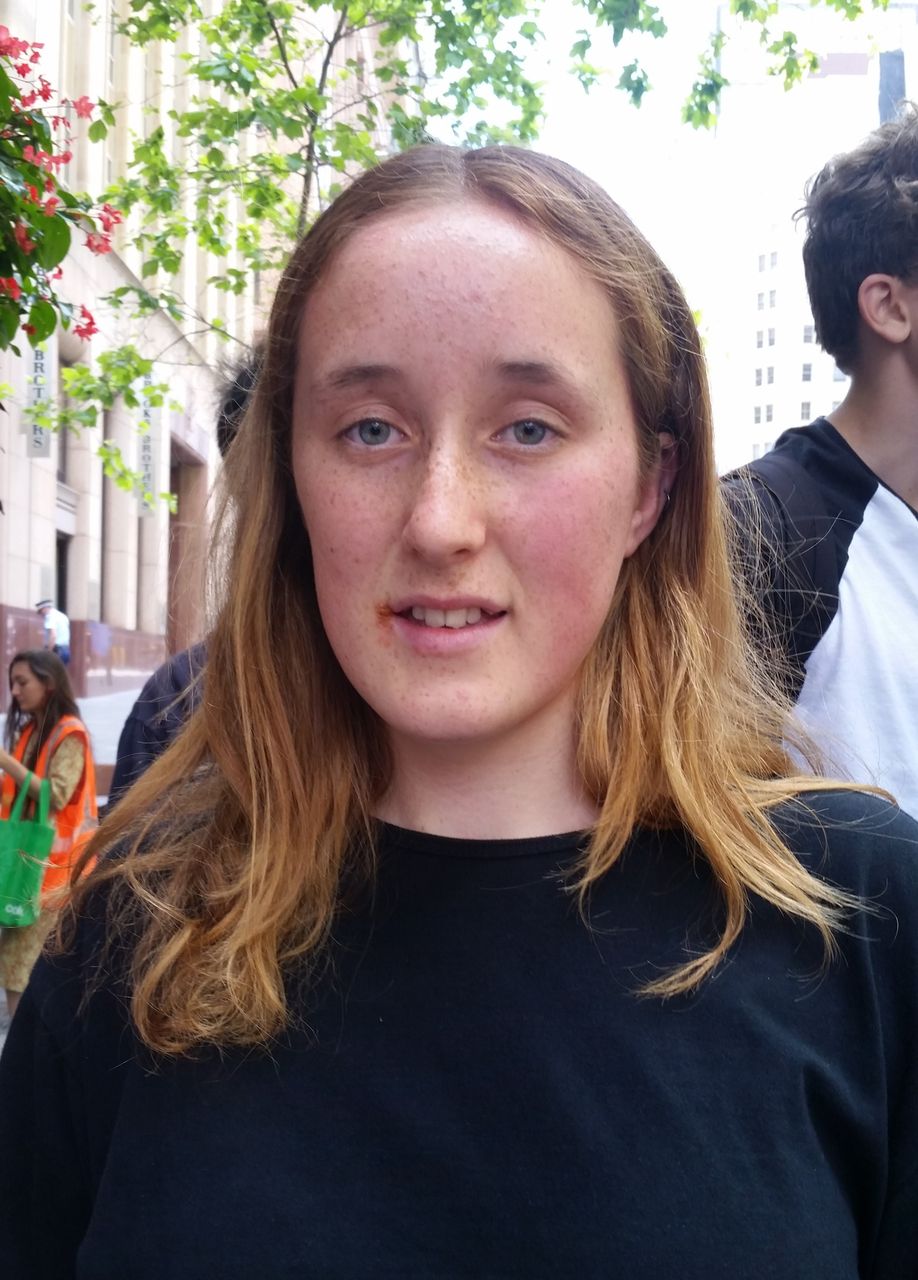 Nikita, 15, said: “I’ve always been really concerned about the environment and wanting us to transition to renewable energies. There are so many sources of renewable energy, but governments keep going back to coal. I think it probably is because of big business and profit.

“When we heard Scott Morrison denounce these protests, and tell kids that they needed to be involved in ‘less activism’, we really wanted to come along. I think we actually need more activism.

“It’s scary, there are so many major issues at the moment. It’s like the world is going to pieces and we don’t know what is going to happen in a few years. You have Trump threatening North Korea and other countries almost every day.” 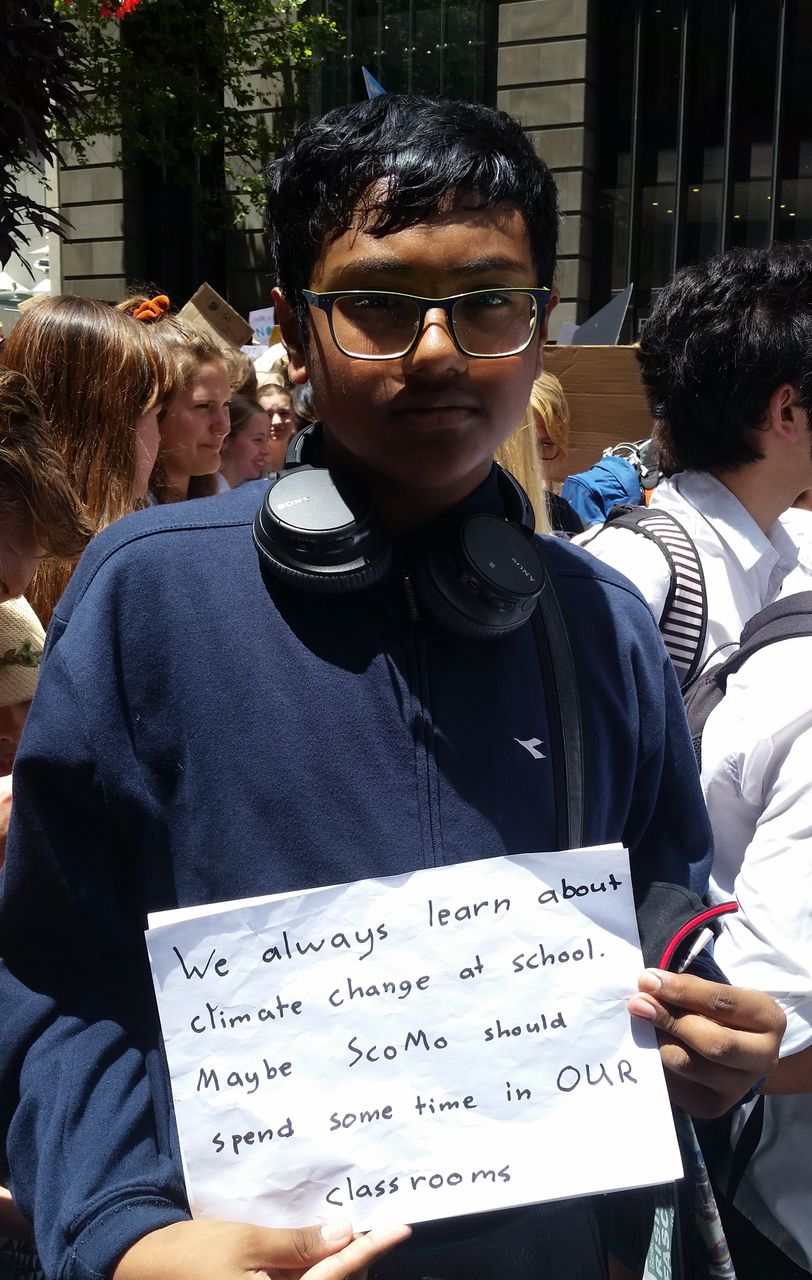 Jareef, 15, said: “I’m here because I’m sick of the government refusing to do anything about climate change. We are the future of humanity. Today’s politicians are not going to be around in 40 or 50 years to deal with it, but we are. That’s why change has to start now.

“I’m Muslim and I’ve suffered from racism and discrimination. I’m really sick of it. I’m against the anti-immigrant measures that are being carried out by Trump and here. What they promote, that Muslims are all terrorists, isn’t true. We’re people and we should be seen that way.

“I’m against the war in Afghanistan and these other wars. They’re all about money. War is always about money.”

Matthew, a year 9 student, said: “I feel that if the world worked together and didn’t have feuding countries it would be brilliant for climate change and every other issue. The only thing that stands in opposition to that is nationalism and the idea that we have to be proud of the country we came from. That’s the obstacle to the world uniting under a one banner. 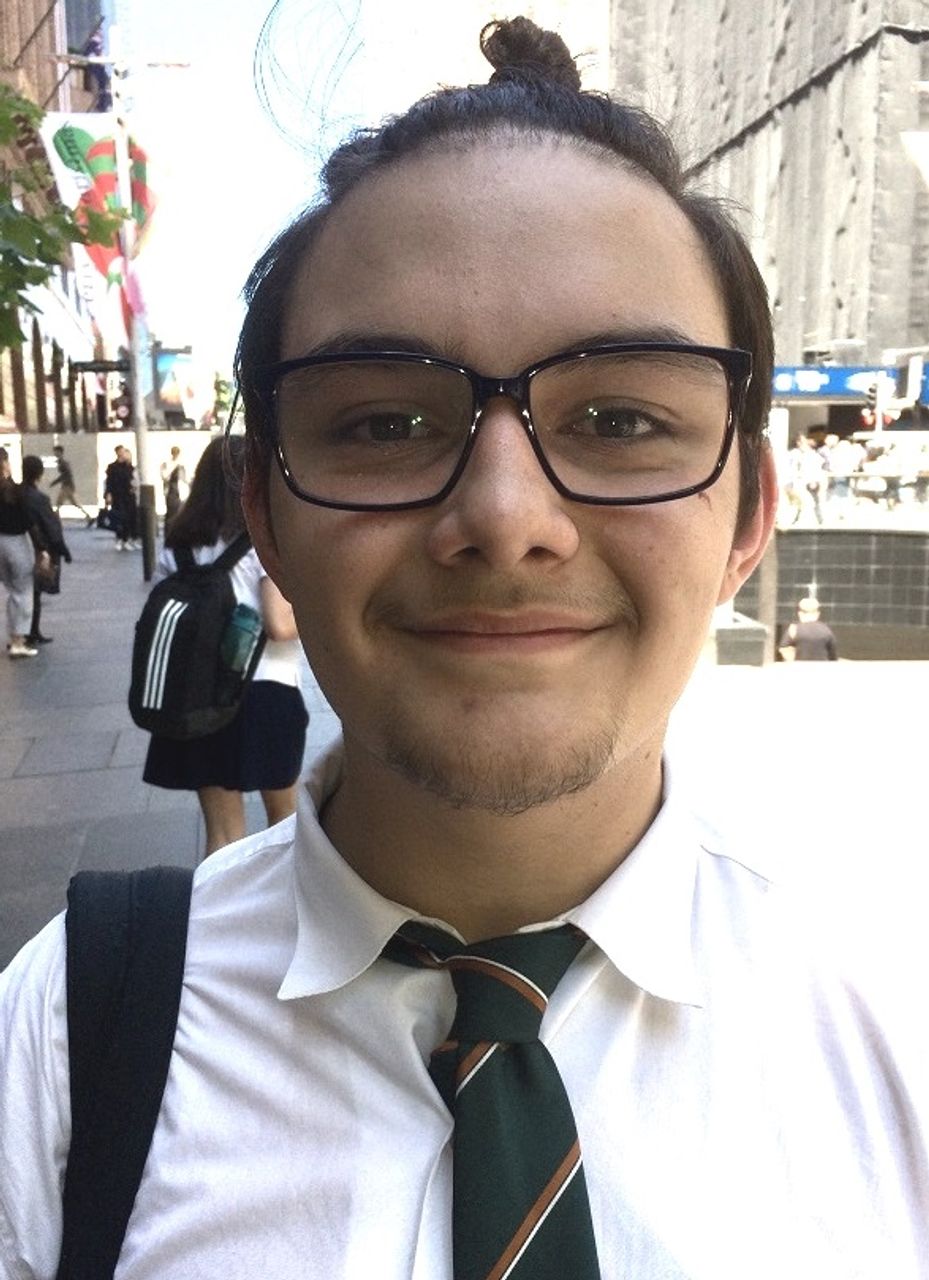 “We have to bring democracy back. That will only happen with the revolution that we have with our generation and generations to come. We have to tell the government that this is our planet, not theirs. Capitalism is not working.”

In Melbourne, Eli, a year 11 student, explained: “I am here today because I have had enough of the inaction on climate change in this country. We are here to send a message to those in parliaments all across Australia, who have denounced this movement, and told us to get back in school and keep out of the adults’ business: no longer.

“No longer will we leave it to the politicians and the businesspeople to decide the fate of our planet and the environment that we will inherit from them. We are here to speak the truth to power. The truth that focusing on renewable energy, protecting natural ecosystems and acknowledging that climate change is a real and urgent threat, are the best ways to ensure a sustainable future for everyone.

“No longer will we accept that the responsibility for our future is placed in the hands of the few. Our voices will be heard today. When our leaders refuse to lead, we have to.” Kieran said the demonstrations were part of an international movement of students and young people. “It definitely needs to be international, because it’s all our world,” he said. “The sky is everyone’s. If one country produces something, it affects every other country in the world, so it is definitely not a national thing.”

SEP and IYSSE campaigners explained that climate change is one expression of a systemic crisis of global capitalism, which is also producing a growing danger of world war. They stressed the need for a turn to the working class, the revolutionary force in modern society. As the IYSSE statement emphasises, climate change can be resolved only through the socialist reorganisation of the global economy to meet social needs, not the profit interests of a tiny corporate elite.