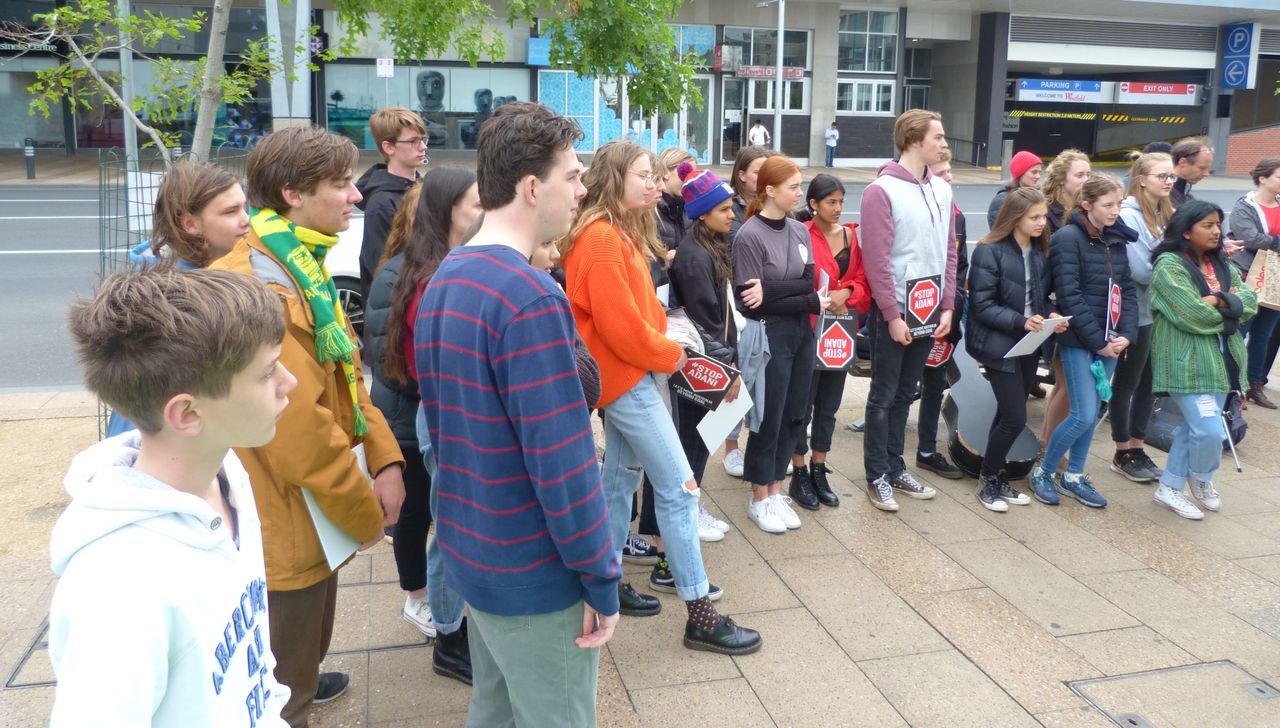 From the World Socialist Web Site in Victoria state in Australia:

Australia: Youth speak out against environmental destruction, poverty and war

Dozens of young people joined a demonstration yesterday in Geelong—50 kilometres southwest of Melbourne—to voice their concern over climate change and the destruction of the global environment.

The protest was one of the school walk-outs to be held across Australia toward the end of the month. Thousands of youth have promoted the events on social media, pointing to a growing political radicalisation.

Students gathered outside the office of the local federal member of parliament, Richard Marles, an Australian Labor Party shadow minister, along with parents and others concerned about climate change. Many students were from Kardinia International College—a private school. At the rally, students spoke about their concerns over climate change, poverty and social conditions, particularly for youth. 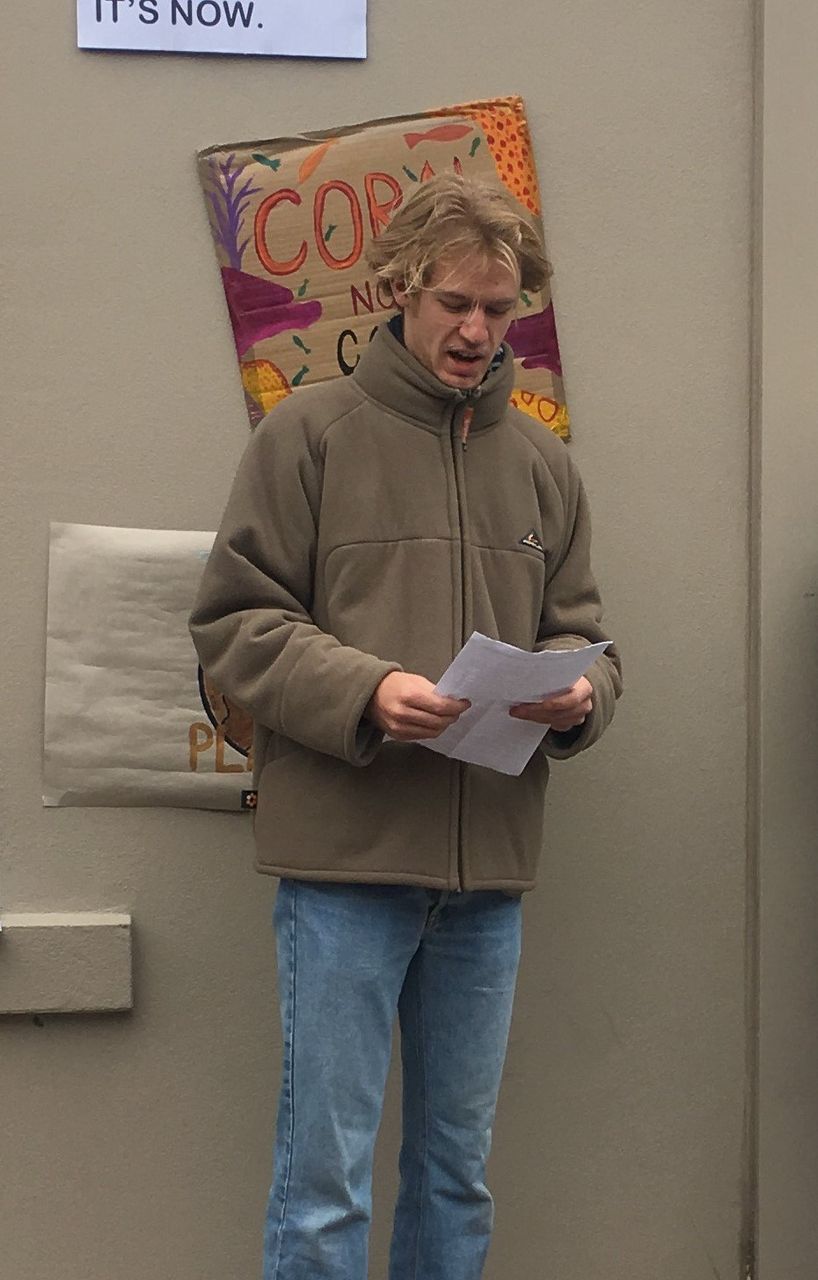 Jude, one of the protest’s year 11 organisers, spoke of the importance of “seeing dedicated kids out, speaking about their future and starting to make a change, because change starts with us.” He continued: “It won’t start with politicians or those who have power. It has to be a ground-up process.” He added: “There are others all around the world who are rallying together to make a change for their future.”

In concluding his speech, he said: “We are tired of the inaction. The decisions made today will affect our planet tomorrow. Whilst these movements have fallen on deaf ears in the past, that cannot happen any longer. This is a problem that cannot be ignored.” 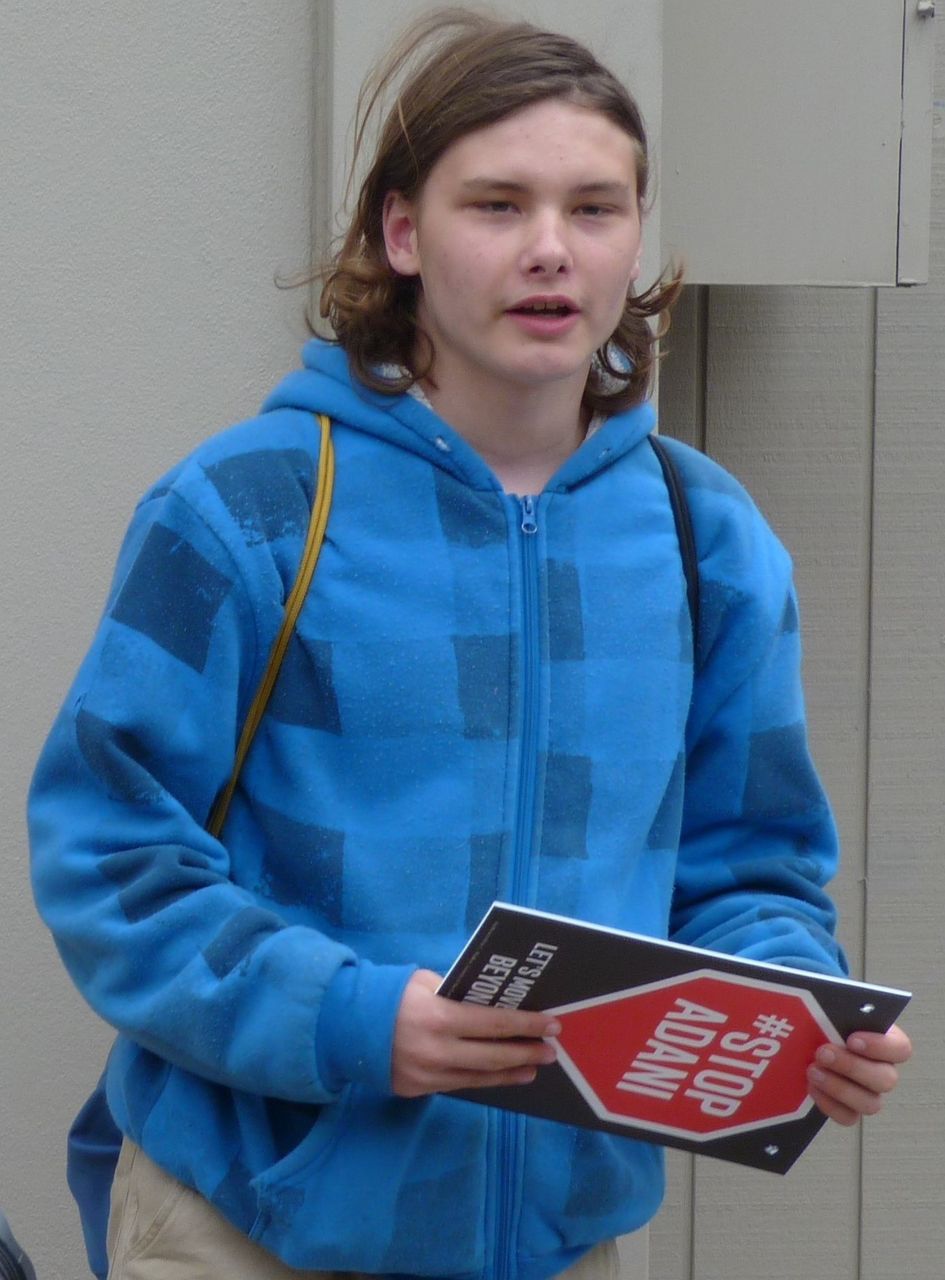 A number of students delivered impromptu speeches. Dom, another year 11 student, said “climate change affects us all, young and old.”

One student said: “I, like a lot of young people, thought there was nothing I could really do about climate change. I’m 15, so I thought I really had no power. But then, when I read the UN climate report which shows that, by 2030, there will be an increase in natural disasters and poverty, I really felt like I have to do something.”

She continued: “The reason why we are all out here is to ask our politicians to represent us, because clearly, on this issue, we are not being represented.”

Evrim Yazgin, the president of the International Youth and Students for Social Equality (IYSSE) club at the University of Melbourne, was invited to speak. Yazgin began: “The IYSSE welcomes the widest participation by youth and students in the demonstrations on climate change and we are here in solidarity with you today.” 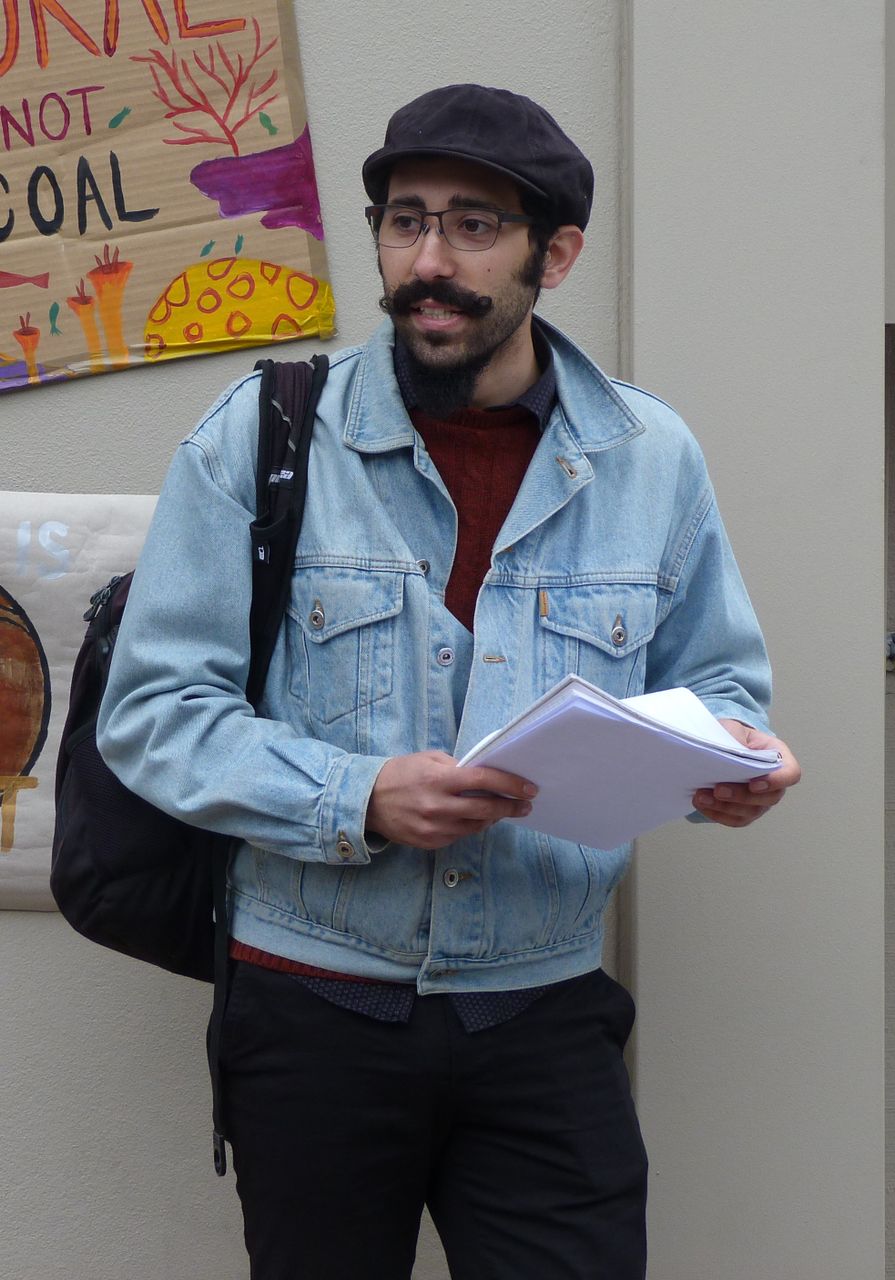 Yazgin emphasised: “The critical question is: What political perspective will halt and reverse environmental destruction, the drive to war, growing poverty and authoritarianism?” The root cause of all these social problems was the global capitalist system. Therefore, “the political perspective that is required to provide youth with a future free from war, inequality, authoritarianism and environmental catastrophe must be anti-capitalist and socialist.”

The IYSSE speaker explained that “under socialism, wealth distribution will be based on need, not profit. The rational reorganisation of society along socialist lines will mean resources being poured into education, healthcare, the environment, and other social programs, not war, censorship, or the accumulation of wealth by a tiny minority.”

Yazgin called on those present to join the building of an “international revolutionary socialist movement opposed to war, inequality, censorship and environmental destruction.” He urged everyone to read the World Socialist Web Site and attend the upcoming public lectures being held by the IYSSE and the Socialist Equality Party.

After the speeches, students and parents spoke with WSWS reporters. Mick, who attended the rally with his 13-year-old son, said: “It’s great to see that these kids are linking up to a global conversation. It’s pathetic what’s going on at the moment with politics. Politicians don’t have a plan for the environment. They aren’t even talking about the environment.”

Saskia, who attended the protest with a group of friends from her school, said: “Politicians are too focused on what’s happening right now, not what will happen to future generations.”

One of the rally’s student organisers, Laura Kelly, said: “I think it’s important that all these youth are coming around. You see 30 kids around here, all different ages, and we are fighting for our future—not just our future but the future generations that will be after us. We’re not able to vote but I think it’s really important that we’re putting our voice out there.” 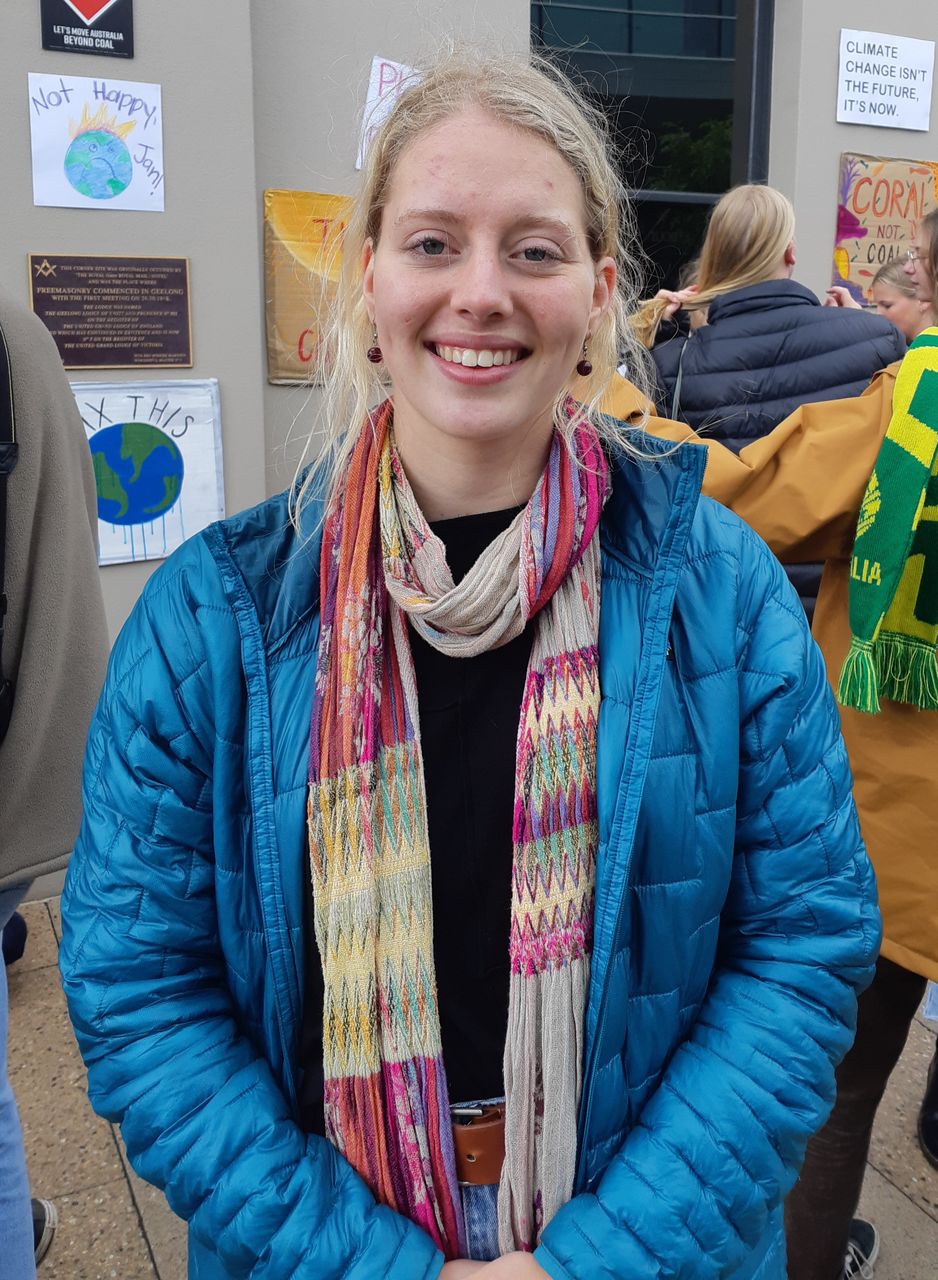 Laura continued: “This youth movement is just getting started, so we haven’t properly seen the actual effect that it has. But I think the powerful thing is that we are the majority. We’ve got all the facts, we know that we’re heading in the wrong direction, and I think it’s important that all of us can see that and that were all doing something about it. I’m so excited that there are so many young kids around. There are a heap of us year 11, but there’s also a variety of different ages, which is really touching.”

Speaking on socialism, Laura said: “I actually study global politics at school, and we look at different theories on power, and the socialist power is really interesting because it’s such a humanitarian and ideal approach to life. The benefits that are described in theory seem so ideal and I think that’s really powerful. People have the same levels of power, money and equality. That’s really cool.” Peter, Laura’s father, commented: “Hearing all the young people speak over the course of the last 15 or 20 minutes, I feel really humbled that we’ve got all these fantastic young people really thinking about this issue and putting forward a lot of thought and ideas, and aspirations. They want to live a better future, and a lot of that is driven by the conditions around us, including our environment, which is just so critical in terms of our health and wellbeing and the way we live together.”

Peter added: “The political structures we’ve had up to this stage haven’t done a fantastic job, in terms of really looking after the world more generally. We need to restructure our political frameworks and ideology to bring it to the fore. I think they [the students] are on the right track. The older generation, we can’t just sit back and expect them to do it—we’ve got to support them as well.”

At the end of the rally, a number of students were invited to meet Marles in his office. However, as a capitalist politician, he has no intention or perspective to act to stem climate change at the expense of big business.

As the IYSSE wrote in a statement published on the WSWS this week: “The starting point is to recognise that the fundamental problem is the capitalist profit system and the division of the planet into competing national-states. Capitalism prevents any rational, global plan being implemented to carry out the necessary drastic and rapid reduction in carbon emissions, while protecting the living standards of the world’s population.”

The latest report from the US Global Change Research Program confirms the danger posed by climate change and the inability of capitalist governments to address it: here.

REPUBLICANS SHRUG OFF CLIMATE REPORT GOP senators retreated to well-trod talking points when pressed about an alarming federal report detailing the impact of unchecked greenhouse emissions on American livelihoods, agriculture, the economy and the environment. The Trump administration tried to minimize the findings by releasing the report the day after Thanksgiving. [HuffPost]