This 25 January 2019 Dutch regional TV video is about 10-year-old girl Lilly Platt demonstrating against pro-global warming politicians at the town hall of Zeist in Utrecht province in the Netherlands.

Little Lilly Platt (10) is the most stubborn climate truant in the Netherlands so far and she is against the label ‘truancy’. Truancy is what ‘you do for fun and for yourself’, and demonstrating for the climate is a serious matter. ‘Sérious business’, says Lilly, in very British English. She has a British mother, Eleanor, and a Dutch father, Jaap.

Lilly is on strike. And when I pick her up at Huis ter Heide at eight o’clock in the morning, where she tells her arguments for half an hour, her hands fluttering with excitement, then it’s already the twentieth Friday morning in a row when she skips school to go in front of the town hall in Zeist standing with her protest sign (‘There is no Planet B’).

This every time from nine to ten o’clock. Eleanor always comes along, with a pillow against the cold, a blanket over Lilly’s legs and when the striking is over, she brings Lilly … to her primary school in Bilthoven.

The education inspector has already called, to inquire why the school did not report Lilly’s persistent absence. But at the Keenschool, with extra attention for ‘original children’, the director calls Lilly’s strike ‘very good’ for her development. …

Wow! They're back and this time they're 32,000 strong! These students want #climateaction and they are not going to stop marching until they get it!

This tweet with video is about the 24 January 2019 pro-climate students’ strike in Brussels, Belgium.

Compared to their tens of thousands of climate-minded peers in Australia, Germany, Switzerland, Canada and Belgium, Dutch pupils have remained remarkably tame up to now.

“Because of that word “truancy “, says Lilly. “They may think that it is not allowed. But it is allowed.”

“Article 9 of the Constitution,” says Lilly. The right to assembly and demonstration. “If your parents give permission, then it can be done.”

Lilly saw the Swedish high school student Greta Thunberg demonstrate every Friday during school time since summer, as the first demonstrator at the parliament building in Stockholm. Fifteen-year-old Greta Thunberg did an angry speech at the Katowice climate summit.

This 13 December 2018 video is called You Are Stealing Our Future: Greta Thunberg, 15, Condemns the World’s Inaction on Climate Change.

Because she is the last generation that can turn the tide, she says. Like Greta, Lilly demands that everyone should honour the Paris climate agreement to reduce CO2 emissions. In addition, now that she is active, Lilly wants all animals to be able to live ‘in peace’, ‘especially pug dogs’.

Lilly met her friends of Sea Turtle Conservation Curaçao at Playa Piskado in November 2017 and had an adventure along the way. Getting a trophy and witnessing the rescue of sea turtles that had swallowed fishing lines.

Lilly and Greta met in The Hague, they talked about the climate and about influencers with nice hair. Now they send each other text messages.

Lilly has been active for longer than Greta. It started with her British grandfather Jim Platt, who is a geologist and after soil research all over the world he ended up in Voorschoten. Jim told Lilly during walks how the discarded plastic they saw lying about would end up in the ocean. Lilly started to pick up plastic waste

This 2017 Dutch language video is about Lilly collecting plastic waste.

This 2017 English language video is also about Lilly fighting against plastic waste.

This January 2018 English language video with French subtitles is also about Lilly fighting against plastic waste.

and took pictures of the harvest, neatly arranged and posted by her mother on her Facebook account ‘Lilly’s Plastic Pickup‘.

She spent two years doing this when the media discovered her in 2017. That attention led to a series of honorary titles and invitations. Youth Ambassador of the Plastic Pollution Coalition, Ambassador of World Cleanup Day. A speech at a conference about plastic-free water in Norway. Lilly was invited by the famous biologist and chimpanzee researcher Jane Goodall to meet in London

I was sent these pictures by someone who was at the same event as me when I met Jane for the first time. I spoke about my Pickup &that grandpa was in Africa the same time as her in 1960. They had the same friend – Jane was very happy and the next time we met I brought grandpa pic.twitter.com/eFeIpVcYvZ

and she speaks at the Dutch climate march on January 10 [no; March 10 in Amsterdam], in February at a maritime conference in Glasgow, and in June she is invited to a meeting for ‘ocean heroes’ in Canada.

And for nineteen Fridays in a row she therefore demonstrated, mostly on her own, at the town hall of Zeist. The day after the massive student strike in Brussels, students from The Hague also announced a Dutch strike, 7 February on the Malieveld [in the Hague]. This twentieth Friday there are also cameras ready for Lilly and mayor Koos Janssen of Zeist is already waiting for her. He did this more often. The mayor of the CDA party finds Lilly’s action ‘wonderful, she is the teacher here’ and wants to underline again that demonstrating for the climate is ‘a right’. Also for children during school hours.

The Burgermeester of Zeist came to my #schoolstrike! I gave him my reuseable bamboo straw set for him&his wife so they can refuse single use plastic! We talked about all that I do. National tv came @EenVandaag and @rtvutrecht the Burgermeester told them they are proud of me! 🙂 pic.twitter.com/0p5AJ2EgGD

The ‘Christian Democrat’ CDA is a rather right-wing party, part of the four party right-wing Dutch government coalition. The CDA and the VVD are the most right-wing of these four parties, including in obstructing pro-climate policies. Will Mayor Janssen resign from his party as it is too right-wing, like this VVD mayor and this VVD mayor already did? 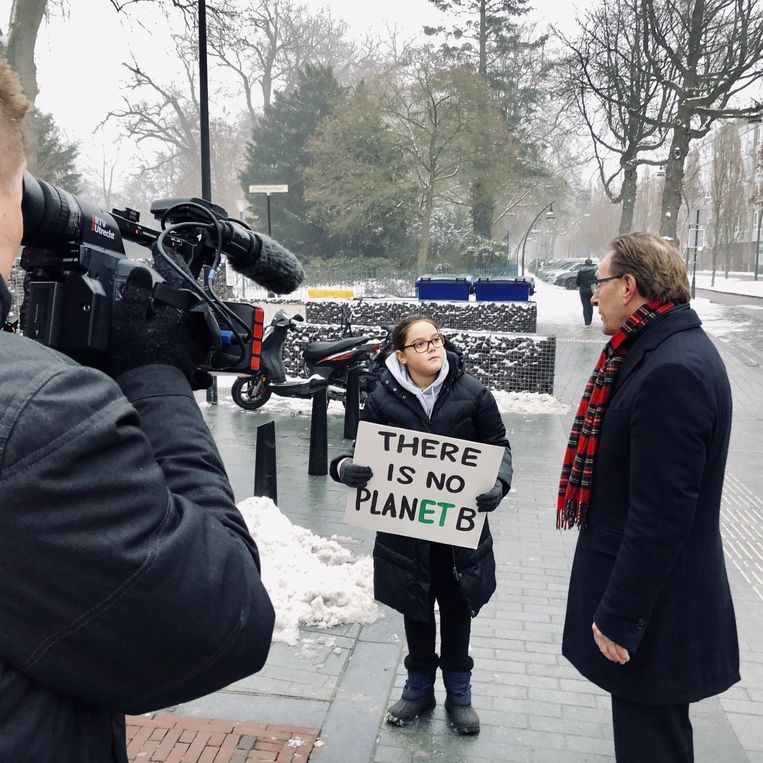 They came especially by train and bus. Utrecht regional TV reports that a boy came that way all the way from Limburg province to demonstrate as well.

And everyone, though it is cold, is in an excellent mood. Later we might say: it seemed to be tame and insignificant, but here it started when we did not do anything ourselves.

USA: MIDWEST HIT BY POLAR BLAST Extremely cold, record-breaking temperatures are settling across parts of the Midwest, with forecasters describing the subzero weather on the way as potentially life-threatening. [AP]

SCIENTISTS: GET USED TO IT Scientists say to get used to the extreme temperatures, and blame the dreaded vortex on a sudden blast of warm air in the Arctic. President Donald Trump used the freezing weather to once again dismiss climate change as a myth, calling for “Global Warming” to “come back fast.” [AP]