It must be the beginning of a Thursday tradition. About 3,000 schoolchildren went on strike today to demonstrate in Brussels for a better climate policy.

They believe that Belgium and other countries are doing too little to reduce CO2 emissions. As long as the students do not get any commitments from politicians, they say, they will repeat the actions in the coming weeks.

The initiators are Anuna de Wever (17) and Kyra Gantois (19). They followed the example of the Swedish activist Greta Thunberg, who skips school every Friday for a better climate.

“Politicians want us to join the system”, says Anuna. “We don’t object to that, but then that system has to be right, it just does not work at the moment. If we continue to pollute the environment, then I have no future at all, so why should I go to school?”

The campaign has been around on social media in the past few days, and that reached many students. About 3000 were there this morning according to the Brussels police at the Central Station. That was many more than the initiators expected.

Most of the demonstrators were between the ages of 16 and 18, but 11-year-old Fenna was also in the middle, together with her father. “I think we need to improve the climate now. But if we let us pass our chance now, then it will be much harder to do something in the future, then we will have to do everything quickly, while now we are still able to do it without stress.”

The young people did agree about this message this morning, but there was no event program. After an hour on the square near the station, the mass suddenly began to start to march, surprising the organizers.

“We will go along with them surely?” Anuna says to her co-initiator. The direction is clear: they want to go to the Wetstraat, the Belgian government center, to talk to politicians. Anuna: “It has not been agreed with the police, but I support it, I can not keep tem all under control, we started it and now it’s up to the young people, is not it?”

But the march never reaches parliament. Policemen, perhaps with the protests by yellow vests still fresh in their memory, close off the roads quickly and are ready with water cannons and rubber truncheons to prevent the students fro passing. The young people turn around and follow other roads, which here and there leads to considerable traffic jams.

Around 3,000 students marched in Brussels on Thursday to demonstrate against climate change. The demonstration was a follow-up to the “Claim the Climate” event in December, which brought together some 70,000 people in Brussels for the opening of the COP24 Climate Summit in Katowice.

“I’m proud of you”, German MEP Arne Lietz told protesters via a bullhorn. “We need more of you around Europe.”

These are good words by Mr Lietz. However, a problem is that Mr Lietz is a member of the social democratic SPD party. That party is a junior partner in the right-wing German government. Which often sabotages pro-climate policies; eg, because they don’t want to hurt the profits of the German car corporations.

One of the demonstration’s leaders told the protesters to organise more actions in schools, and said that the protesters would be back in bigger numbers.

This will be difficult for many students. The father of Fenna has given permission this time. “But I do not know if it will work out that way next week.” More young people say so. Now they were allowed to demonstrate by their parents and there was understanding in many schools, but that will not be the case every Thursday.

Initiators Anuna and Kyra will be back next week. “I do think that there may be fewer people, but we will continue until we will be listened to and we hope that it will be taken over in other countries.” It went from Sweden to Belgium, so why not continue to spread?” 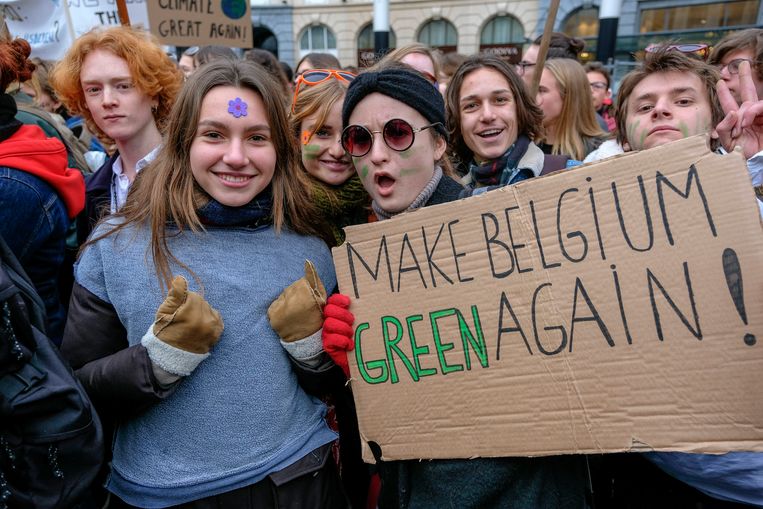 This 12 December 2018 video is called School strike for climate – save the world by changing the rules | Greta Thunberg | TEDxStockholm.