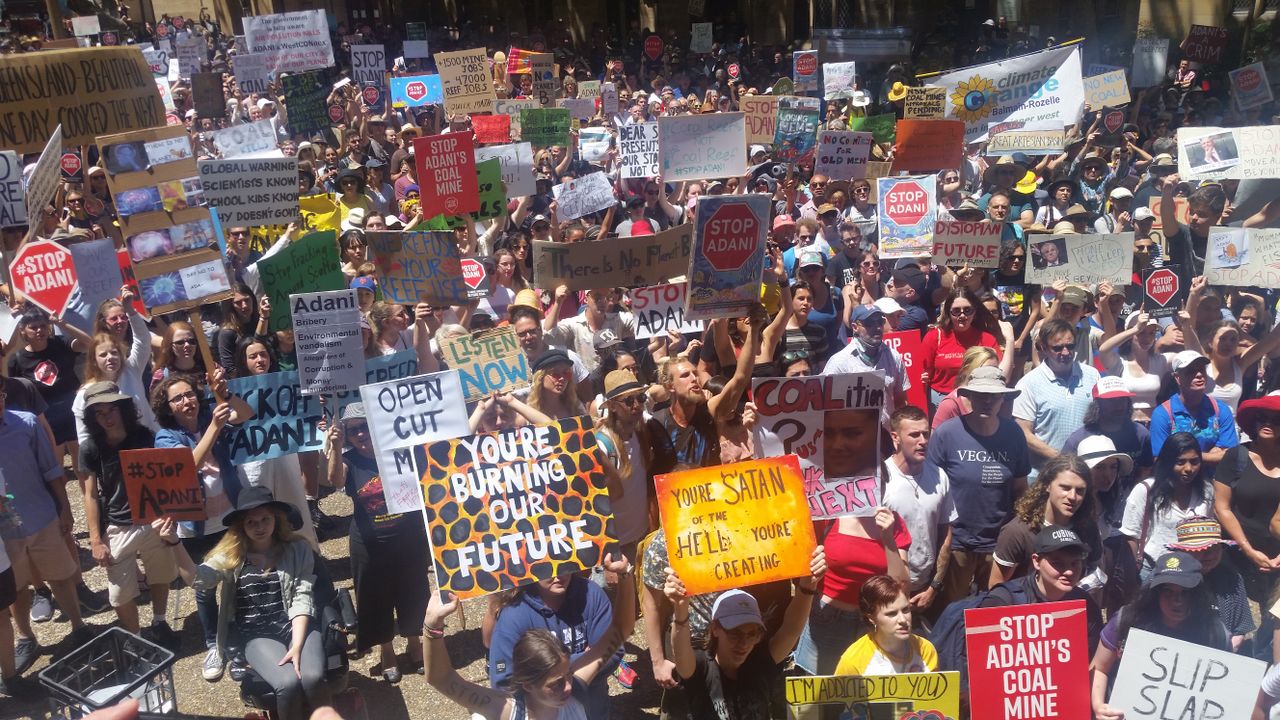 Thousands of people, including hundreds of high school and university students, took part in protests across Australia last Saturday, in opposition to ongoing environmental destruction, including the creation of a new coal mine in central Queensland by global mining company Adani.

The rally in Melbourne was attended by more than 5,000 people, while around 1,500 took part in Sydney. Smaller protests were held in the Queensland cities of Brisbane and Cairns. They took place a week after 15,000 high school students participated in a “climate strike”, in the largest demonstrations by secondary pupils since 2003 protests against the US invasion of Iraq.

Saturday’s rallies were held in the wake of Adani’s announcement that it would press ahead with the development of the widely-opposed Carmichael mine. The facility will be self-funded by the company and will produce 10–15 million tonnes of coal a year, at an annual cost of $2 billion.

Scientists have warned that in addition to increasing carbon emissions, the mine could negatively impact local species, central Queensland’s climate, water supplies and the Great Barrier Reef.

Many of the students and youth at the rallies expressed their anger over the refusal of governments to take any action to resolve climate change. The growing sentiment is part of a broader politicisation of young people, which includes hostility to militarism and war, the erosion of democratic rights and a deepening social crisis.

The organisers, however, including the Australian Youth Climate Coalition and Tipping Point, sought to keep the protest narrowly focused on the issue of Adani’s new mine.

Speakers in Sydney and Melbourne presented environmental destruction, including the Carmichael mine, as a result of the right-wing ideology of the Liberal-National Coalition, which is in federal office. … 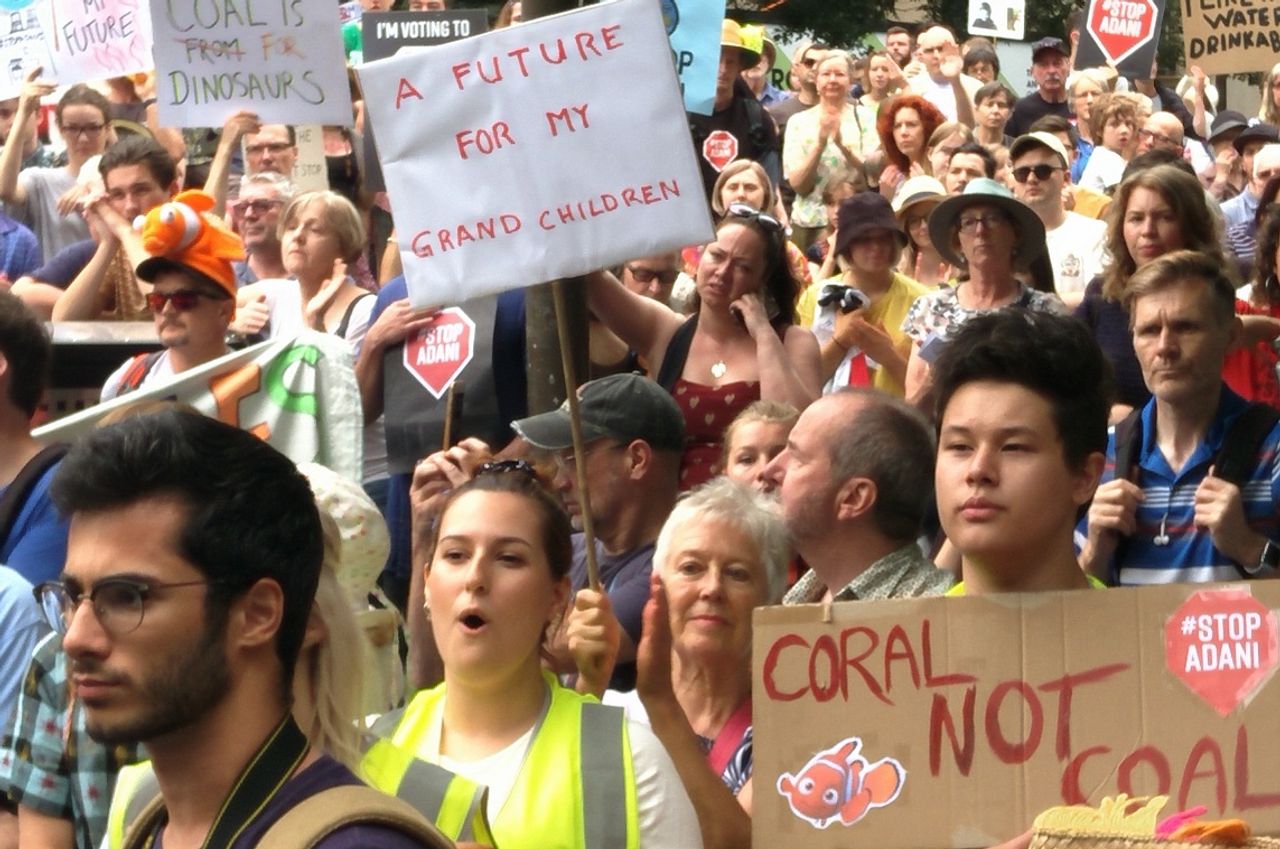 Members of the Socialist Equality Party distributed a statement entitled “To stem climate change, capitalism must be ended.” They called for a turn to the working class, and explained that climate change could only be halted through the reorganisation of the world economy to meet social need, not private profit.

WSWS reporters spoke to some of those in attendance.

In Melbourne, Jacob, a university student, said: “I don’t think coal has a place in society. It’s not in my interest. It’s being mined because there is money in it. There is nothing in politics that I agree with.

“The vote of people of wealth is worth more than most people. If you are a media mogul you can support political parties. Rupert Murdoch has 70 percent of the media under his thumb. The Murdoch vote is worth far more. That is how power works in so-called democracies. I think the drive for profit is the most destructive factor in the environment.” Eleanor commented: “We came today because we’re Master of Environment students at Melbourne University and we’ve been taught about the risks of climate change and the importance of stopping this mine.

In Sydney, James, a year-nine high school student, said: “I went to the student strike. It feels good to do something for once. The issue of climate change is about our future. I’m sick of it being this spectre looming over us all, with nothing being done to address it.

“There are entrenched interests. I don’t know if there is direct bribery and corruption going on, but there are clearly questionable things taking place with politicians retiring and ending up on the boards of coal companies. It’s the nature of the political class. I think it is capitalism that means climate change is not being fixed and emissions keep going up.” Layla, who has just finished high school, said: “I’ve come to the protest because I think it’s important to take initiative for a planet that we’re caretaking for future generations. We have a duty to protect it for people who are going to come after us.

“Members of parliament are avoiding taking responsibility for the impact of their own policies, which can be directly correlated with climate change. It’s completely irresponsible and it’s being driven by greed. Many of the impacts of climate change can be linked to those structures that support capitalism, and drive its goals and aims.

“One of the reasons climate change is so concerning is because there are so many different expressions of it. There are these overarching impacts, including rapidly changing weather patterns, rising sea levels and the destruction of the Great Barrier Reef. It’s all encompassing and it’s terrifying.”

Patrick, a sound engineer and musician, stated: “I’m opposed to coal and rising carbon emissions. I’m particularly against the growth of fracking by companies such as Santos. They’re drilling into the Great Artesian Basin, and poisoning it, which is potentially terrible for all of the farmers who rely on that underground water. 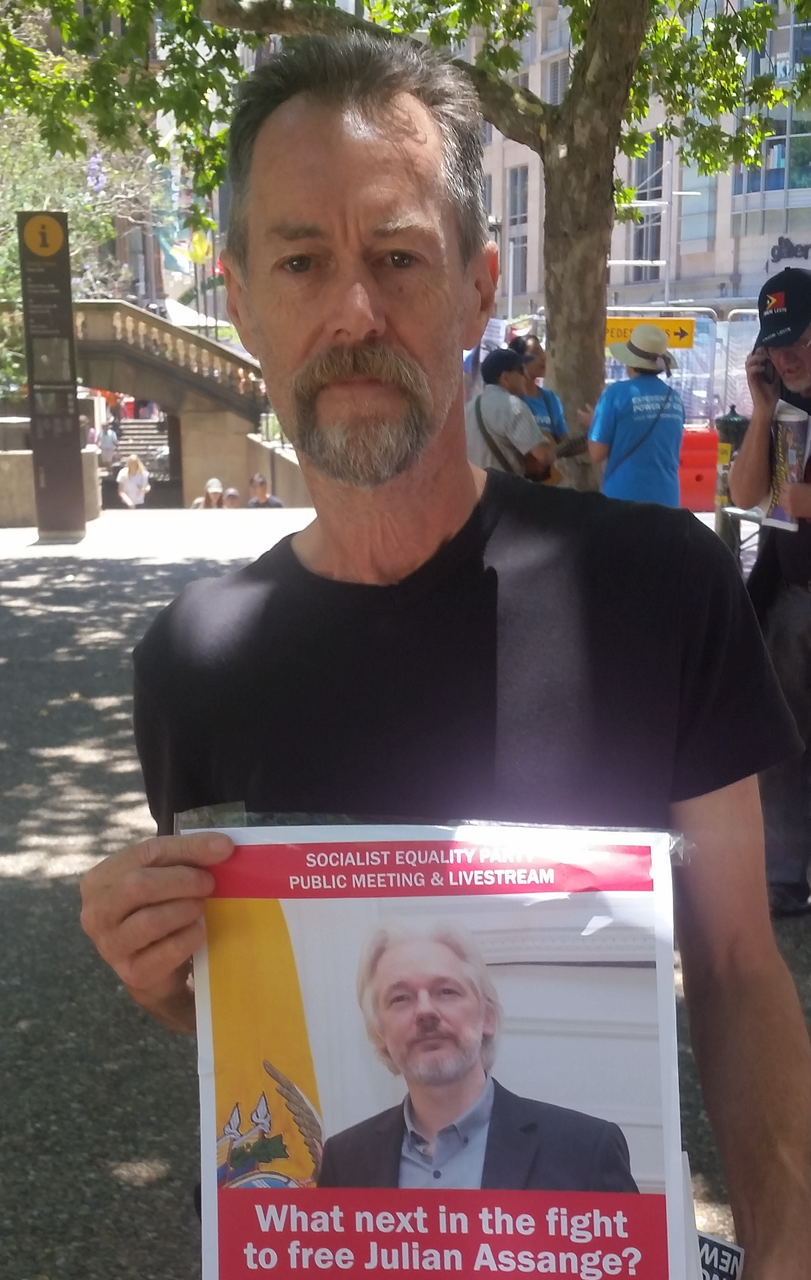 “There’s a real shortsightedness. A lot of politicians just don’t care. Look at Trump. The attitude is ‘we’re going to make money now’, and then they’ll be dead and gone when we feel the full impact of climate change. It’s a lack of care for anyone else.

“We all need to get on board with renewables, and stop these coal mines from going ahead. The methane from fracking needs to be stopped. But the question is whether we are ready to break down all of the existing institutions. I think we are pretty close.”

Patrick expressed interest in a poster advertising the SEP meeting in Sydney in defence of WikiLeaks founder Julian Assange next Sunday.

“Governments are hiding what they did”, he said. “All of their war crimes and the corruption that has been going on. All Julian did was share the information. There’s no guilt there. The same with Chelsea Manning. She showed us what was happening. That’s not a crime. The people who carried out the illegal wars are the guilty ones.

“Assange is being attacked to try to scare other journalists or people who are going to spill the truth of what is happening. We need to keep talking about Julian, and letting people know that we defend him.”