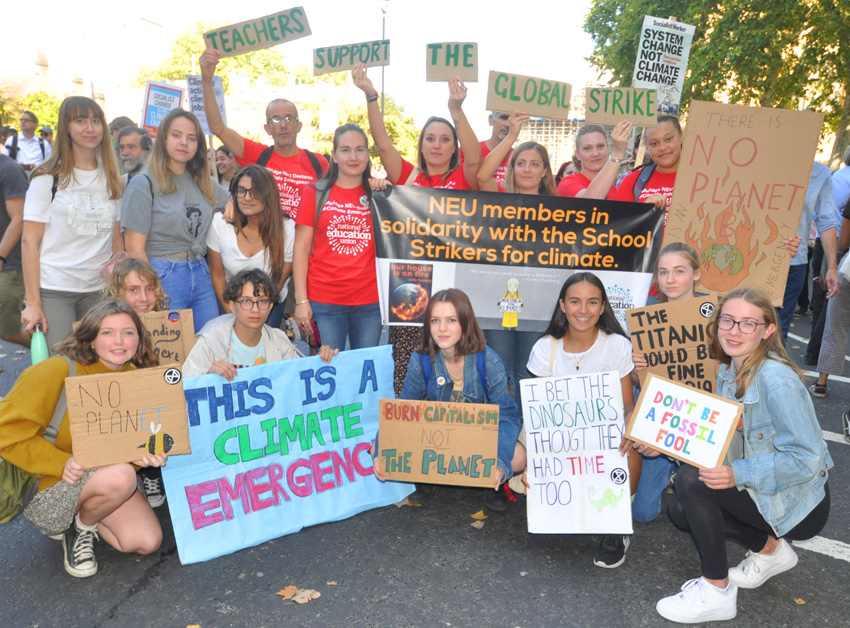 MILLIONS of youth supported by trade unionists walked out of their schools, colleges and universities yesterday, in one hundred and fifty countries across the world in the biggest ever global youth strike over climate change.

From America to Africa, Australia to Europe, right across the length and breadth of Asia youth rose up demanding an end to capitalism and its destruction of the environment and people’s lives.

Because of the different time zones Australian youth were first out. Organisers estimated 300,000 people turned out for the global climate strike in Australia. Protests were staged in 110 towns and cities across the country.

Hours later in Thailand, more than 200 young people stormed the Environment Ministry in Bangkok and dropped to the ground feigning death.

In India’s New Delhi, one of the world’s most polluted cities, students rose up.

More than 800 protests were held across all 50 US states and in Europe vast demonstrations took place in country after country.

In the UK for the first time workers in their trade unions joined the youth strike.

‘How will the youth of the world forgive us if we don’t back them. Capitalism has no future for us!’

She concluded by saying: ‘Military, especially the US military are the worst energy users.’

BEIS workers on indefinite strike, teachers and lecturers, art workers from the Tate Modern and South Bank Centre and zero-hours workers from the National Theatre joined tens of thousands of school youth and students who marched towards Parliament to London’s Millbank.

Jack Jeans from the Tate United PCS branch told News Line: ‘The crisis of capitalism is hitting the most vulnerable people in the world. They are paying the price for the exploitation of the world and it requires a serious political response.’

A group of LSE students joined the BEIS strikers marching to Millbank from their picket line in Victoria Street.

Isabela, from Student Climate Action, said: ‘We were kettled by the police so we couldn’t bring our whole contingent. It’s important for students to unite with the trade unions.

‘It’s the same economic system that is exploiting workers across the world that is driving climate change and inhibiting our future.’