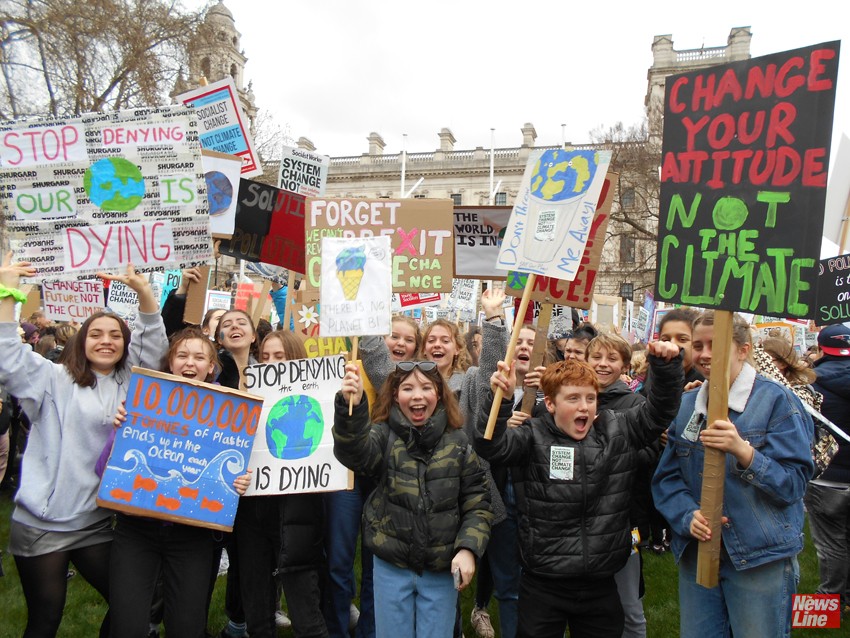 Youth are marching against capitalism

Yesterday youth took over the grass in Parliament Square, part of the millions worldwide striking against climate change

OVER 10,000 school youth from around the South East of England descended on London’s Parliament Square yesterday shouting: ‘Solution not pollution! We want change!’ They were part of tens of thousands nationwide and millions of youth around the globe who joined in the global youth strike against climate change.

In Sheffield, thousands of school and university students held a mass rally in the town centre. Ellie, 19, studying General Engineering at University of Sheffield told News Line: ‘Young people have not been involved enough in questions about climate change. These things should be part of our education. We are now faced with the necessity for everyone to come together to do something about it. People have got the ideas now, but we need to implement them through mass action.’

In Brighton, thousands also walked out of their schools and colleges and joined a mass march through the city. Right across the world in more than 1,200 cities over 90 countries in every continent, youth walked out of school and joined the strike. On the London demonstration many of the youth blamed capitalism for climate change and demanded revolution and socialism.

Natasha Mula, from the Arts Educational Schools (known as ArtsEd) in Chiswick, Hounslow said: ‘We want to take responsibility for our planet and make sure we are not passive but instead part of a whole community which wants to see change.

‘Capitalism is a system designed to only let a tiny percentage of people be rich. The sooner we realise that we can’t win in the system and we have to completely change it, the better. I am for revolution 100%. Karl Marx’s principles are admirable.’

Sam Bolton also from ArtsEd added: ‘I do not want our future generation to pay the price for what we or the government have done. We have the right to protect and preserve the world we live in and the lives of the future generations. We can take the helm of this country. The people in power are not making the best decisions. They have enough money to help people but they don’t. They have the opportunity to, but they choose not to. This world is run by the rich people, international companies and governments. We have had this government for a long time. We have to raise our voices for the future.’

Jack Long from Colchester Sixth Form said: ‘Capitalism puts the needs of the rich and the wealthy above people who really need it. We need a revolution to sort this mess out. We have had a capitalist government since 2010 and we need a change. We have got to get rid of the system. We have to get rid of capitalism itself.

Dallala Giberthorpe from Nower Hill School in Pinner, northwest London, said: ‘We have been given the opportunity for our voices to be heard and I think that it is very important for us to take that opportunity, and I want this government out.’

Nischhal Rai also from Nower Hill School said: ‘Capitalism does not work. If you give too much wealth to a few people at the top it is always going to fail. Everyone must have their basic rights, food, shelter, water. I am for a socialist society and socialism is the best system when compared to capitalism.’

This 15 March 2019 video from England says about itself:

TRNN’s Jaisal Noor speaks to some of the 5,000 youth that marched in London, England.

In every continent, and in 90 countries, tens of thousands of school students walked out of class, took to the streets and demanded a future, something which capitalism cannot provide for them. Young people rose up across Europe, Australia, Asia, Africa and the Americas.

They demanded ‘save the planet’ and pointed to capitalism as the source of the climate change disaster. The strikes began last year when one teenager, Greta Thunberg, held a solo protest outside the Swedish parliament. Since then the movement against climate change has erupted worldwide.

This is truly an international revolutionary movement of young people determined to stand up, speak out and change the world for the better. In fact, the youth are the most revolutionary section of the working class, and revolutionary situations have always begun with a mass revolt of the youth against the oppressive system of the day.

Today this system is capitalism. It is in its death agony and determined to drag the whole planet down with it. The rebellious millions of youth are now fighting alongside and inspiring the only really revolutionary class in society to take action.

For instance in Belgium, thousands of workers joined the youth strike yesterday in Antwerp, Bruges and Liège, before travelling to Brussels for a large demonstration. Gina Heyrman, a spokeswoman for the 1.6 million-strong Belgian socialist trades union ABVV-FGTB, said the movement has similarities with the Paris protests of 1968.

She said: ‘This is the first time we have had a political strike together with young people. Maybe we’re at the beginning of a new era. I hope so. Everyone talks about the climate now. Everyone is aware of it, thanks to the students.’

However, the situation is much more revolutionary now than in 1968. This revolutionary movement of youth comes at a time when capitalism is completely bankrupt, where the working class is on the move in country after country, where the ‘Yellow Vests’ uprising in France is escalating.

There are constant battles on the streets of Greece between workers and police, there is mass youth unemployment in both Spain and Italy, and the Italian banks are on the verge of a further crash. That crash will bring the banking system of Europe down with it. …

In Britain, there is an entire generation of workers who have had enough after ten years of austerity, with school heads and nursery heads marching on Parliament furious that education has been cut to the bone, three years of rail strikes to keep the guards on the train, strike after strike of NHS staff. The strike wave in Britain has only just begun.

As one school student from east London said on the London march: ‘I am for socialism because capitalism is the wrong way forward. Capitalism is destroying the planet. The only way is a worker-controlled country for a sustainable world. I try not to buy too many products. There is overproduction and crisis which causes job losses. Revolution must be done here and all over the world.’

Youth know that capitalism by its very essence must destroy to survive, it is a system completely driven by profit. Where bosses exploit markets, use an army of slave labour, make as much profit as they possibly can … and when they can make no more, sack the workforce, shut down the industry and move on in search of a new market to exploit, just like a swarm of locusts.

This 21 June 2019 video from Britain says about itself:

The May global student strike took place in over 120 different countries and over 1,000 different locations. In London, trade unionists joined school students in calling for workers to join the climate strike planned for September 20.

As one student says, “when future generations ask you what you did to stop this global crisis, and you tell them ‘Well, my boss didn’t want me going so I did nothing’, they’re not going to be very happy about that.”

So no more excuses. Start working out how your workplace can join the strike now.