This 25 January 2019 video from London, England says about itself:

The Grave of Karl Marx

Karl Marx died on 14 March 1883 and was buried at Highgate Cemetery in London. Marx is famous for his works as socialist philosopher and economist and writing the book “The Communist Manifesto” in 1848.

Among the causes which Karl Marx supported was the fight of the Irish people against English landlords and English rule. Here is a famous poem about the grave of Irish revolutionary Wolfe Tone, who lived half a century earlier than Marx.

From the World Socialist World Site:

Reporters from the World Socialist Web Site spoke to those visiting Highgate Cemetery in London on Saturday. Many had been moved to go there by the recent desecration of Karl Marx’s grave.

Last week, the World Socialist Web Site revealed that the Metropolitan Police had closed their investigations into two recent attacks on the grave, having made no arrests.

The monument, still bearing the marks of the attacks, receives a steady flow of visitors throughout the day—people who travel all over the country and the world. Many have left flowers or messages of support at the foot of the grave. 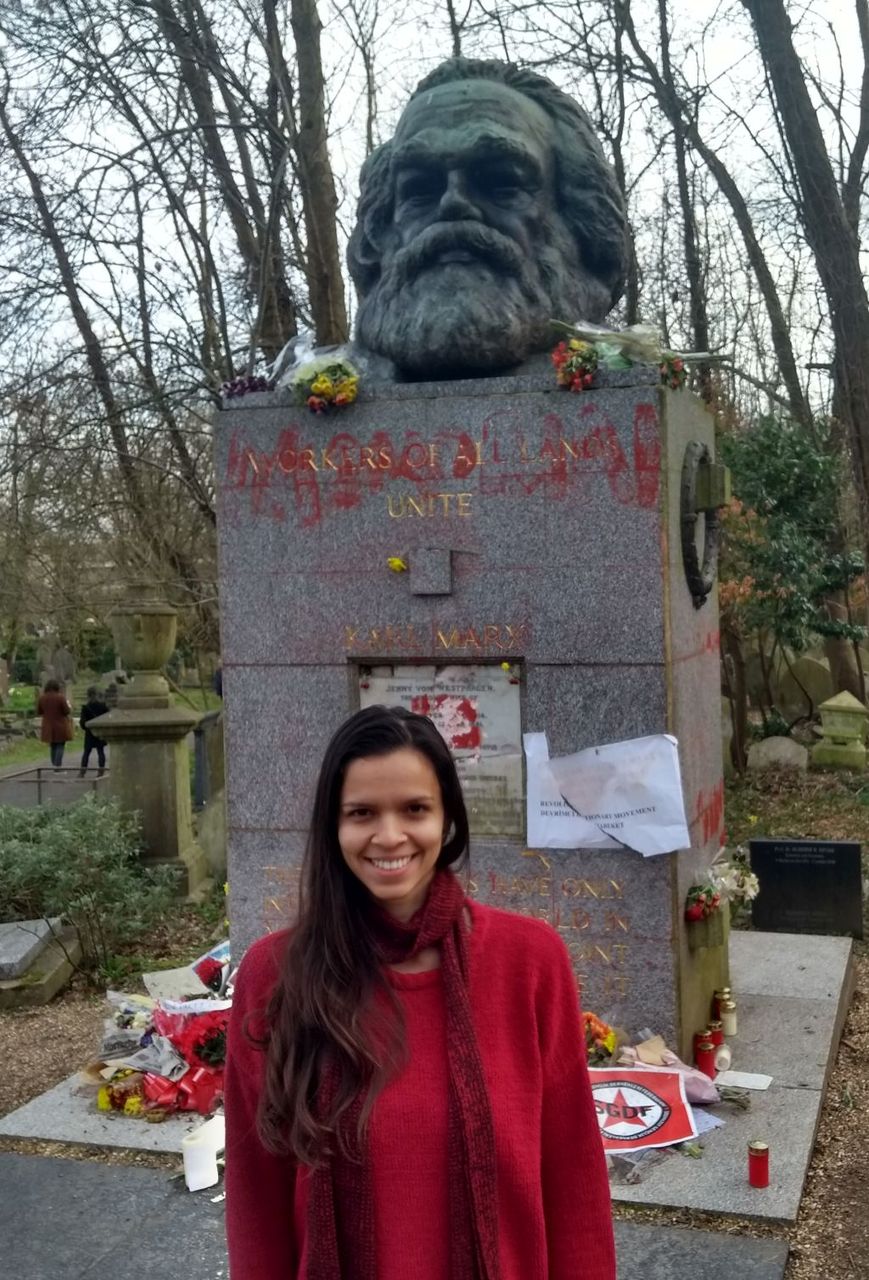 Carolina, a student, spoke of the impact of the rise of the far right on her home country, Brazil. Last October, the fascistic reserve army captain Jair Bolsonaro, who has hailed the military dictatorship that ruled from 1964 to 1985, was elected president of Brazil. …

“I traveled from Brazil to see Marx’s tomb. There we are being attacked by fascist ideas against labour, against the people, and against their human rights. Our president is very anti-communist. He and his government attacked Marx’s ideas and democratic ideas in general. In education and the schools, the freedom of ideas and thought is being attacked too with certain classes being closed down. They are working against left-wing teachers trying to teach critical ideas. They are being persecuted.

“This attack on the grave is ideological persecution. The authorities, the government ought to be doing something about it. I think Marx’s ideas are important for showing us how to understand the current world and society, capitalism, and how it works, and how to build a new one.”

John, a civil servant from Australia, did not want his photo taken, noting the right-wing political climate within which he was working. He said, “I admire Karl Marx greatly and am a great fan of his and of his works. He tells us everything about today. It’s hard to sum it all up. His forward-looking philosophy is about where we need to go, but also his analysis of how we got here. Even most right-wingers would admit that his analysis of capitalism is still foundational. There’s Marx the economist, Marx the philosopher and Marx the political theorist, and they are all to be admired.

“I hadn’t actually heard about the attack on Marx’s grave as I’ve only just arrived in the country. But looking at it and what it represents, I assume it represents fascists angry that we, socialists, are relevant in the world again.” 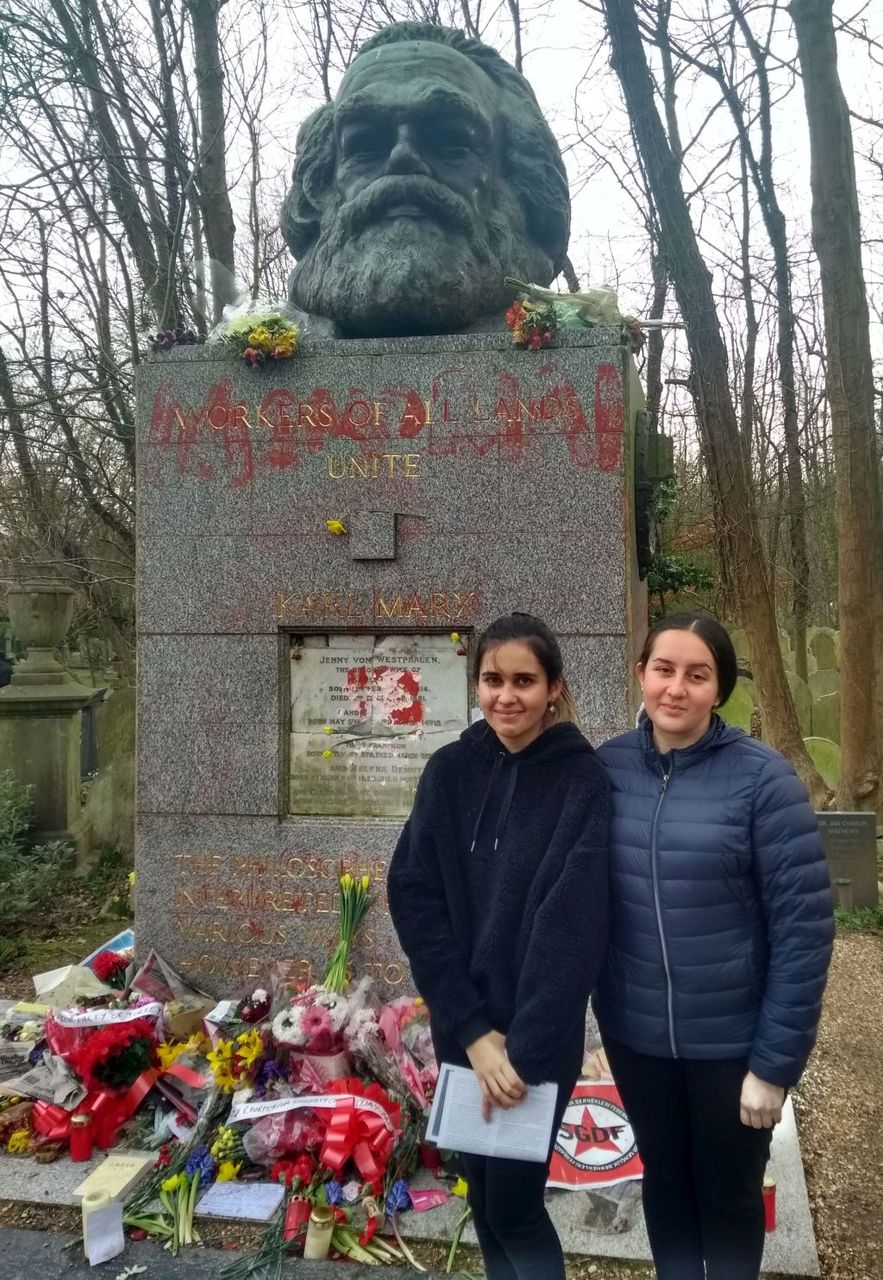 Natalia and Kim live locally, but decided to visit the monument only when they heard it had been attacked. Kim said, “I think it’s connected with the rising number of attacks against Jewish graves, and with the growing far-right danger, of course. It’s terrible to attack any grave, but especially one which has such significance to so many people.”

Natalia, originally from Chile, described a personal experience of right-wing thuggery. “In Chile, there was a book by a left-wing author. I forget the name, but it was a humorous book attacking [fascist dictator General] Pinochet. Several people who were seen reading it on public transport were assaulted. Those attacks were never properly investigated.

“You’ve said that there is no effort being put by the police or anyone into finding who did this attack on Marx’s grave? That doesn’t surprise me.”

Elena, a teacher from London, explained, “I’d heard the grave had been vandalised and wanted to come down and see it and show my support in some way.”

Asked why she thought the monument had been attacked, she replied, “It’s obviously significant that people felt it necessary to attack Marx’s grave. Quite clearly at the moment there is a rise of the far-right across the UK and Europe. They’ve obviously become emboldened by the normalisation of right-wing ideology in governments across Europe. You have the rise of [former English Defence League leader] Tommy Robinson, for example.

“I think these forces are scared of the threat, as they see it, of socialism. They’re doing anything they can to fight against socialist ideas and they’re using the right wing to intimidate people.”

Describing the importance of Marx’s ideas, she said, “Marx’s significance today is hugely important. Global capitalism is failing and they are trying to hold on to the last vestiges of it. But exactly as this sign [resting against Marx’s memorial stone] says, ‘You can destroy his gravestone but you can’t destroy his ideology.’ His ideology will live on and hopefully we will have some sort of socialist movement and government that will come out of it soon.”