The fight against privatization and the closure of public schools in São Paulo has led to a massive student protest in 2015. A São Paulo teacher, Paula, discusses what issues public education in Brazil faces and the role of the IMF and World Bank.

This interview was done in São Paulo on November 8, 2015.

From the World Socialist Web Site in Brazil:

Teachers in São Paulo, the largest city in the Americas, have been on strike since February 4—the beginning of the school year—in opposition to a pension reform that was introduced by right-wing Mayor Bruno Covas (PSDB) and passed by City Council at the end of December 2018.

In March 2018, when Dória tried to push the pension reform through the City Council, São Paulo teachers staged a 20-day strike, which managed to postpone the vote on the measure for 120 days. After a series of changes in the reform by the current mayor, Covas, who took office after Dória was elected governor of São Paulo, and the unleashing of brutal police repression against teachers, who protested throughout last December in front of the City Council, the pension reform was finally approved. 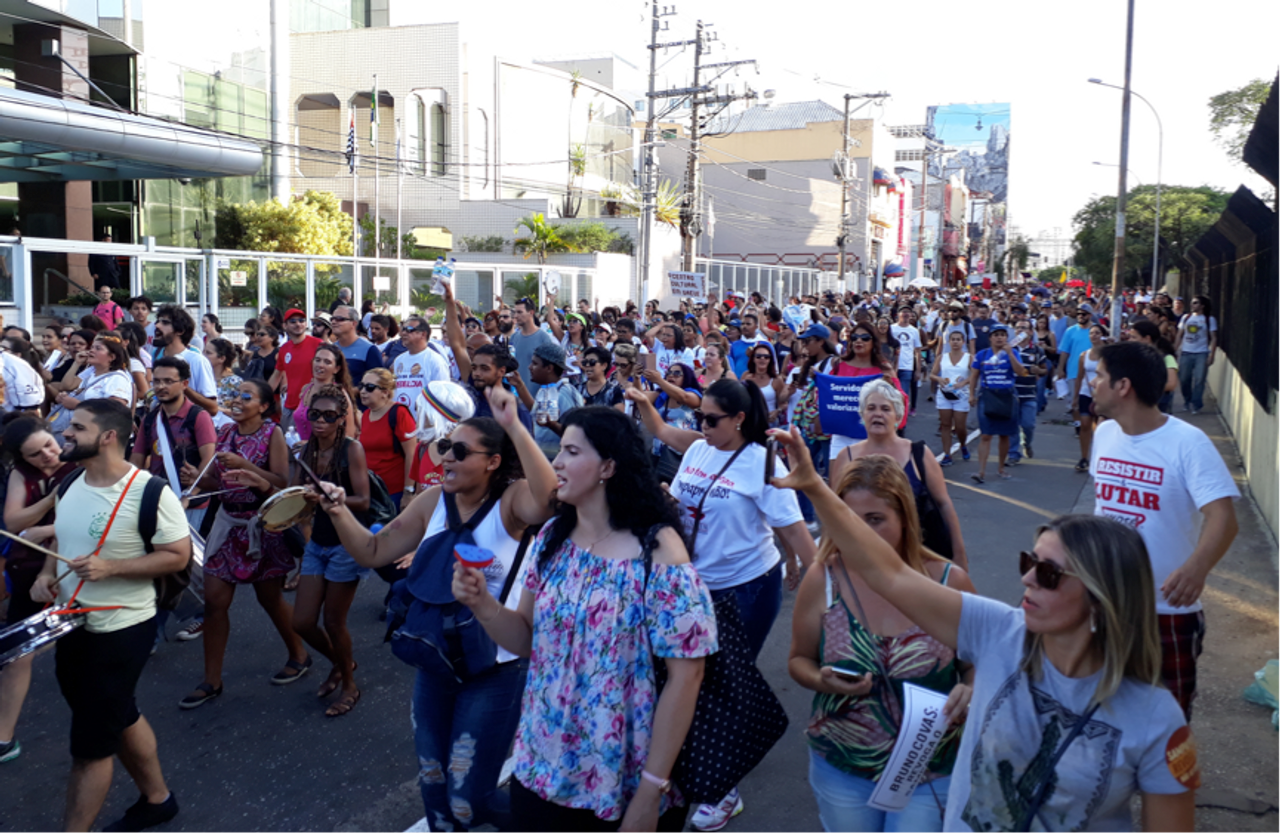 Covas’ pension reform increased the pension contribution from 11 percent to 14 percent of teachers’ total wages and established a maximum monthly pension of around 5,600 reais ($US1,500). Those public sector workers who want to receive a full pension must contribute to a complementary pension plan (SAMPAPREV) managed by private funds, which can increase the pension contribution to up to 19 percent.

Many demonstrators denounced the fact that the pension reform that was approved mainly benefits the major banks, which will manage the SAMPAPREV. Dino, a pedagogical coordinator said, “I do not think we have to surrender the rights of the workers to the banks.” Gustavo, a school employee commented, “In the end, it is the worker who will pay the bills once more … Where is the great wealth concentrated? It is not with us. We have seen the list of banks that owe money to the city, there are billions of reais!”

Doctors and pharmaceutical technicians also denounced the privatization of São Paulo’s health care system to serve the interests of large banks and companies. Lígia, a doctor, said, “Health is being privatized; that is, management, which is public, is being handed over to a private company. An outsourced UBS [health care clinic], run by a private company is much more expensive, is controlled by the banks, and there is a lot of corruption.” Carlos, a pharmaceutical technician, denounced the cut in the number of health care employees, which “harms the population … We do not have adequate working conditions, do not have chairs, computers, electronic passwords [to expedite service] … they are exchanging better quality hospital supplies for cheaper ones, there is also a lack of medicines.”

Lis, a doctor, insisted that “the SUS [national public health system] has to be valued, the population needs to be well treated, and health and education cannot stay the way they are for lack of investment. We doctors should strike to protest against the poor quality of care for the population, with people dying while waiting in line for medical attention.”

In addition to the extensive outsourcing of health care, which according to the pharmaceutical technician Dênis, affects 93 percent of health care employees today, there is the prospect of a wage freeze for years to come. “It has been since 2004 that we have had a wage increase of 0.01 percent per year,” he said. “In that year, the wage of a health care employee was almost six times the minimum wage, and today it has decreased to half that. If we continue like this, we will be making minimum wage in a few years.”

According to history teacher Marlei, “The strike is growing. The assemblies and demonstrations began with 35,000 public sector workers, and at the February 15 rally there were twice as many.” She also said, “in addition to teachers and health care employees, the workers at zoos, cemeteries and libraries, as well as social workers, psychologists and cultural employees are also on strike.”

Gustavo denounced the president of the union, Claudio Fonseca, who has a long record of presiding over the betrayals to teachers, saying, “Sinpeem is presided over by someone who backed [Brazilian fascistic President Jair] Bolsonaro, who backed [governor of São Paulo João] Dória, which shows that he has a political attitude that ends up confusing his interests with those of the workers.”

Physiotherapist Mercel denounced the lack of democracy in the assembly, because “only Claudio Fonseca spoke, and during the assembly, he let no other person present any other proposal.” He then said that Fonseca “manipulated the assembly.” According to him, “80,000 teachers and other public sector workers teachers decided to go to Marginal Tietê [São Paulo’s main avenue] and block it. In the middle of the way there, Fonseca negotiated with the police and decided not to take that route. This is alarming. He was terrorizing the workers, saying that there were hundreds of policemen [waiting for us], that there would be a bloodshed, etc.”

Marcelo added, “It’s very complicated that a struggle as big as this it left in the hands of a person like that. What happened was the first betrayal of an assembly decision. The moment now is not for hesitation. There is a national pension ‘reform’ about to be presented, and our struggle can inspire the whole of Brazil.”

All those who spoke to the WSWS felt that the struggle of the public sector workers in São Paulo is an anticipation of mass struggles that will break out throughout Brazil. Marlei, a teacher said, “It is important to repeal the pension reform here in São Paulo, because if it is not repealed, with the national pension reform, things will get even worse.”

“São Paulo is a laboratory for all of Brazil,” Marcelo said. “We, the workers of São Paulo, have had the responsibility to begin the confrontation, once the reform began here, so has the resistance against it.”

On almost every continent, teachers have come to the forefront of the struggle against government austerity and levels of social inequality not seen since the 1920s. Teachers have played a key role in the resurgence of the class struggle that broke out across the world in 2018 and has accelerated in the opening months of this year: here.

Across the world, teachers in dozens of countries across five continents are taking part in a strike movement of unprecedented international proportions: here.

16 thoughts on “Brazilian teachers strike against attack on pensions”