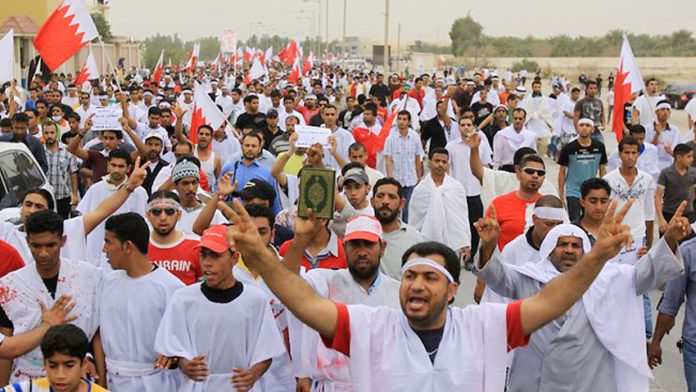 BAHRAINIS living in Britain are preparing for a wave of protest actions today, to coincide with massive anti-al Khalifa regime demonstrations planned in Bahrain.

Bahraini activists say they intend to first hold a protest rally outside the office of the British Prime Minister and then move to the high profile Hyde Park in central London, Bahraini revolution satellite channel Lulu reported.

Hisbut-Tahrir or The Liberation party rallied outside the Saudi embassy in London on Monday in protest against Saudi Arabia’s military presence in their country and Saudi forces involvement in the Bahraini regime’s bloody crackdown on revolutionaries.

The Bahraini revolution started on February 14, 2011.

Britain has been an active supporter of the al-Khalifa regime over its two years of crackdown on demonstrators despite repeated criticisms by human rights groups.

Last Wednesday, Amnesty International said: ‘The declared ban on all protests and gatherings in the Bahraini capital and the threats that “parents could be jailed if their children repeatedly participate in demonstrations” is outrageous, and violates international law.

‘Authorities in Bahrain have, for years, abused existing legislation to suppress any form of dissent, but these new measures are taking their disregard for human rights to a completely new level.

‘We fear that these draconian measures will be used in an attempt to legitimise state violence as new protests are being planned today.’

The human rights group earlier blasted British Prime Minister David Cameron for backing the ‘facade of supposed reform in Bahrain’ urging him to issue a warning to the Bahraini dictator King Hamad during their meeting in London.

Cameron, however, repeated his old rhetoric during the meeting. His office simply said, ‘Cameron reiterated Britain’s support for ongoing political reform in Bahrain’.

However, a Bahraini opposition group says the British government has a negative attitude to the revolution in the Persian Gulf state and supports the repressive al-Khalifa regime in the country.

It said: ‘London’s position is clear from comments by the British ambassador to Bahrain and the change in the al-Khalifa approach to protesters after the Bahraini ruler’s meeting with British Prime Minister David Cameron.

‘We are extremely displeased with the British government’s stance,’ Abbas added.

Last week, Cameron hosted talks with Bahraini ruler King Hamad al-Khalifa in London but no details of the meeting were made public except a brief statement by the British PM’s office.

‘The Prime Minister also encouraged His Majesty to continue to demonstrate substantive progress in all areas,’ the statement said.

Ahead of his visit to London, the Bahraini dictator amended a law on public gatherings to ‘ban organising protests, rallies, gatherings or sit-ins in Manama, with the exception of sit-ins outside (offices of) international organisations’.

Ahead of Hamad’s visit on Tuesday, human rights group Amnesty International warned Cameron that Bahrain is displaying ‘a facade of supposed reform’ though the reality is that critics and dissenting voices are just locked up and silenced.’

Fazel Abbas said the Bahraini opposition groups will surely continue peaceful protests, especially the Tamarod demonstration planned for today despite the regime being fully geared up to suppress public rallies in the coming days.

Amnesty said last Wednesday: ‘Two new emergency decrees issued by the King of Bahrain last night – which include the banning of all protests – are a further shameful attempt to completely ban any form of dissent and freedom of expression in the country.

‘The 1976 juvenile law was also amended and now stipulates that, if anyone under 16 years of age takes part in a demonstration, public gathering or sit-in, his or her parents would be warned in writing by the Ministry of Interior.

‘If six months after the warning the juvenile was found in a new demonstration, his or her father could face jail, a fine or both.

‘The decrees are the latest in a series of measures that appear designed to stifle dissent in the wake of increased protests.

‘In recent weeks, the security forces have used shot-guns and tear gas against protesters and conducted mass arrests of protesters’.

Amnesty has also received reports of torture and other ill-treatment of detained protesters.

‘For example, in the early hours of 29 July at least 27 – mostly young – people were arrested in the village of Dar Kulaib in west Bahrain, where clashes between security forces and protesters had taken place.

‘Meanwhile, bloggers, photographers and others active in social media networks have been targeted for arrest in recent days.

Despite these measures, sporadic protests have continued with a new mass demonstration planned today.

Amnesty International Middle East and North Africa Director Philip Luther said: ‘Banning sit-ins, public gatherings and demonstrations in Bahrain’s capital and stipulating that parents could be jailed if their children repeatedly participate in demonstrations is outrageous, and violates international law.

‘The authorities in Bahrain have for years abused existing legislation to suppress any form of dissent, but these new measures are taking their disregard for human rights to a completely new level.

‘We fear that these draconian measures will be used in an attempt to legitimise state violence as new protests are being planned for today.

‘Instead, the authorities in Bahrain should focus on ensuring people across the country can exercise their rights to freedom of expression and peaceful assembly.’

Amnesty said some of the provisions in the law place arbitrary restrictions on freedom of expression and gives the Public Prosecution excessive discretion.

Since February 2011, when large anti-government protests began in Bahrain, the human rights situation in the country has deteriorated sharply.

‘Scores of opposition activists have been arrested and tried before military courts. Many were tortured.

‘Some, including 13 prominent figures, are serving lengthy sentences of up to life.

‘Dozens of people have died, including from torture, but mainly as a result of unnecessary and excessive use of force by the security forces during protests.

‘Human rights activists have meanwhile been jailed for their work’, Luther concluded.

Barbed wire and cement blocks dominate the landscape of Bahrain these days. Today, August 14th, has been called as Tamarrod (rebellion) journey and the totalitarian Khalifa regime has reacted making whole villages into prisons: here.

Bahrain: ANHRI Denounces the Arresting of an Athlete and Banning Others from Travel without Legal Grounds by the Bahraini Security.