This cartoon from Britain jokes about the present British Conservative government blaming Russia for all which they themselves ruin. Leading, eg, to a BBC Photoshop job on British Labour leader Jeremy Corbyn‘s hat, adding Kremlin buildings, to make him look ‘Russian’ to help the Conservative government‘s anti-Russia hysteria. 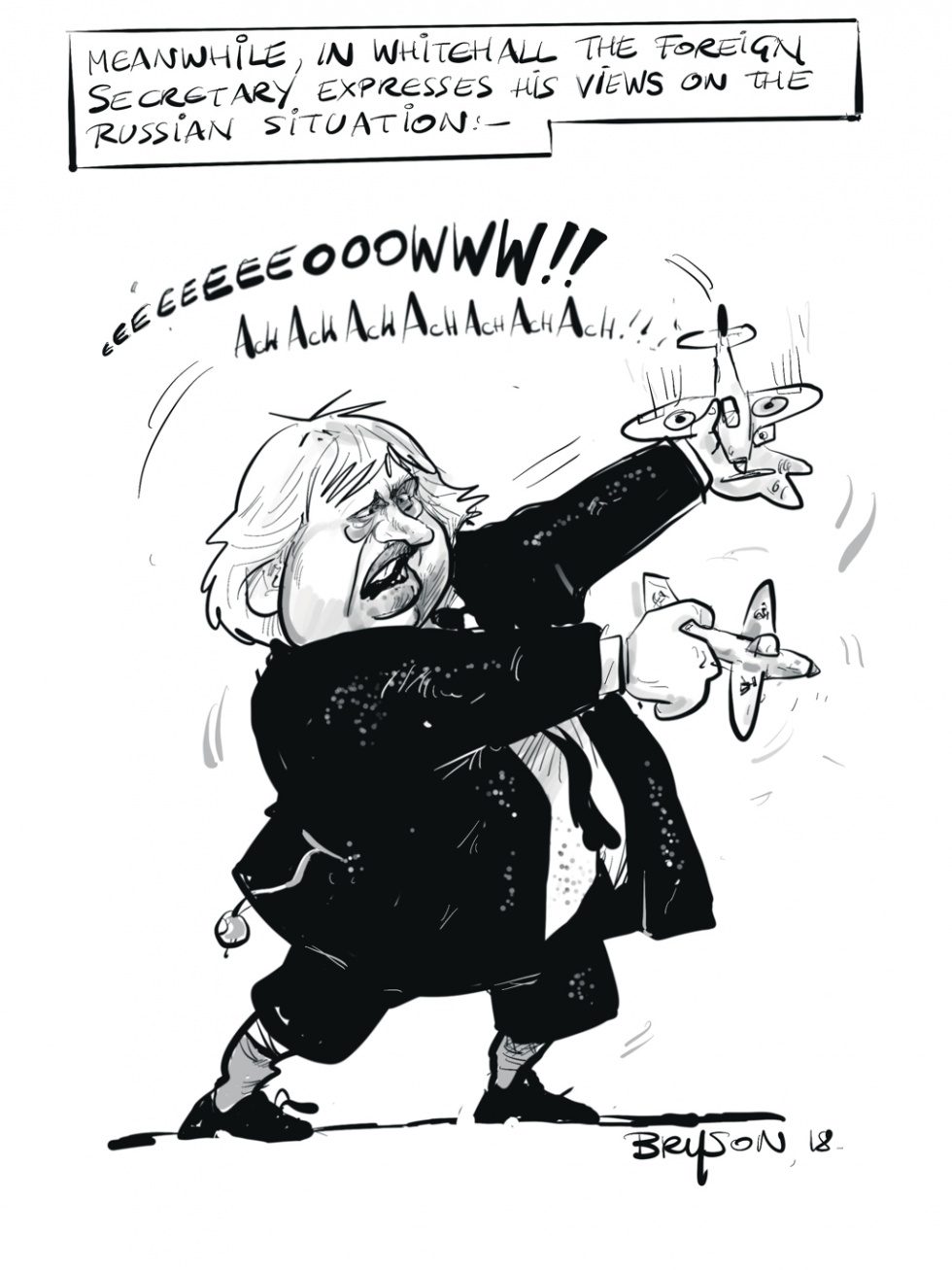 This is cartoon by Mike Bryson from Britain about Conservative Foreign Secretary Boris Johnson and Russia.

Labour is right to focus on dodgy oligarch property rather than bang the war drums: here.

Jeremy Corbyn is hardly the only person smeared as a ‘tool of Russia’. Whether one is Green party leader Jill Stein in the USA; former United States Democratic party chair Donna Brazile; a Black Lives Matter protester against a police killing in Wisconsin, USA; or a Canadian First Nations person and/or Canadian environmentalist; the political establishment claims they don’t have actions and ideas of their own, but only move if Putin in the Kremlin pushes buttons to make them move.

Part of the establishment propaganda says that supposedly the whole political extreme right is pro-Russia. That propaganda aims at forcing people who for extremely valid reasons dislike the extreme right to become uncritical of the hysteria about Russia.

However, is the whole political extreme right really pro-Russia?

Let us look for an answer to that question at the Dutch neo-nazi party Nederlandse Volks-Unie (NVU; Dutch Peoples-Union). Founded in 1971, with as key purpose to rehabilitate convicted World War II war criminals, Dutchmen who had joined Adolf Hitler’s SS.

What is the relationship between the NVU and the PVV?

The NVU agrees with Wilders’ bashing of Polish, Romanian and other East European workers.

When Wilders organises demonstrations against Moroccan Dutch people and other Muslims, whether in Arnhem or in Rotterdam, the Nederlandse Volks-Unie sends friendly delegations to participate.

When Wilders organises a demonstration in The Hague, the NVU neo-nazis with their orange-white-blue flags (which used to be the flags of the Dutch nazis when they collaborated with Hitler’s 1940-1945 occupation of the Netherlands) and their nazi salutes are prominently present.

When the NVU and other far rightists organised a march to a part of The Hague where many immigrants live, hoping to provoke fights, Geert Wilders said he wanted to join that march.

To some extent, this is surprising. When Wilders broke with his old party (the pro-Big Business governing VVD party for which he used to be an MP), and founded the PVV, he claimed that the new party wanted to have nothing to do with racist parties like the Vlaams Belang in Belgium and the National Front in France. As Wilders was supposedly just critical of the Islamic religion.

However, when Wilders needed voters’ signatures to participate in elections, a Wilders aide asked for signatures on an Internet site of Dutch Holocaust deniers.

And a few years later, Wilders invited French National Front fuehrerin Marine Le Pen to The Hague as a political ally (the NVU welcomed that). This year, Wilders invited the Vlaams Belang to participate in his Rotterdam Islamophobic demonstration.

So, is all well between the NVU and the PVV? Not completely. Wilders, like some other European rightists, supports the political right in Israel. While the NVU wants to kill all Jews, outside or inside Israel; right-wing or left-wing. (In this, the NVU also differs from Norwegian neo-fascist mass murderer Breivik. Breivik wrote that Hitler was wrong killing all Jews, as he should supposedly only have killed left-wing Jews). The NVU used to emphasize that this, Israel, was the only point in which they strongly differed from Wilders.

However, then came a 4 March 2018 NVU propaganda video (no, I don’t link to nazi propaganda). NVU fuehrer Constant Kusters said he had found a second disagreement with Wilders. Wilders had gone to Russia to meet local MPs. Kusters reacted that was wrong; and that the NVU supports NATO governments’ sanctions against Russia. He said Wilders was already wrong to obey Israeli Prime Minister Netanyahu as his master, but that now he wrongly also obeyed a second master, Russian President Putin.

A background to this is the NVU view on the Ukraine war. Like neo-fascists in Sweden, Italy and elsewhere, some of whom joined Ukrainian extreme right paramilitaries to fight in the war in eastern Ukraine, the NVU has links with the Ukrainian anti-Semitic and anti-Russian extreme right. A local NVU leader went to Kyiv to strengthen the friendship of the NVU with Ukrainian neo-nazi paramilitary organisations. Wilders going to Moscow does not square with these NVU policies.

On 27 March 2018, the NVU blasted Thierry Baudet’s FvD party as well for not joining in the Russia-bashing.