On 15 August 2019, Ms De Wever had been invited to speak at the Pukkelpop rock festival, one of many music festivals in summer in Belgium, to speak on the 20-27 Sepember global pro-climate strikes.

However, during her speech, a group of far-right men booed and heckled her, made obscene gestures, and threw alcohol at her. As witnessed by 17-year-old Tatyana Decelle of Youth for Climate Brugge. A reporter of daily Het Nieuwsblad saw neo-fascists shouting the slogan Leftist rats, fuck off! Marieke Verduyn (18 years of age) saw right-wing extremists insulting a black woman.

The far-right men had flags depicting the Flemish lion.

The official flag of Flanders depicts a lion with red claws and red tongue. However, the men at the festival had flags with a black lion with black claws and black tongue. Wikipedia writes about that version:

It is not an official symbol. It was, however, used by the Flemish fighting alongside Nazi and SS troops [in World War II], and is as such also known as the collaboration [with Hitler] flag. It is today used by right[-wing] movements.

In this tweet, journalist Jeroen de Preter of Belgian Knack weekly writes about what happened next at Puppelpop. Translated:

About Pukkelpop and Anuna De Wever. Now, my daughter calling on the phone, very upset. After Anuna had been spotted at their tent, young men have stopped them from sleeping with death threats, thrown bottles full of urine at them and destroyed their party tent. Security is protecting them now.

The right-wingers also tore open several other tents as they thought Anuna De Wever might sleep there.

Security later reported they had banned the extreme right version of the Flemish flag at the festival. These flags had been distributed by the racist Vlaams Belang party.

This was not the first extreme right incident at Pukkelpop. In 2018, racists had sung: ‘Cut off their hands, Congo is ours’. A cynical allusion to the bloody colonialism in Congo by King Leopold II of Belgium. The colonialists then cut off hands of Congolese people who refused to do forced labour and left them to die.

Earlier this summer, at the Dranouter music festival, men of Vlaams Belang and the Schild & Vrienden far-right paramilitarists attacked a stand of the ROSA feminist movement. They destroyed a table and left the letters Vlaams Belang plus a swastika as graffitti on a banner supporting LGBTQ rights. 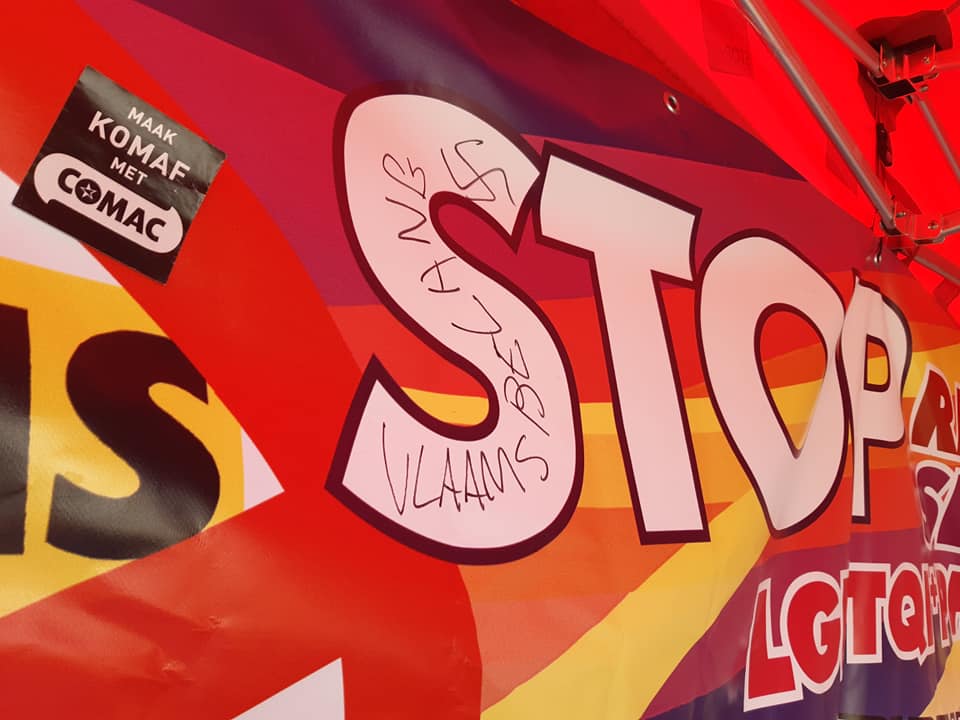 The vandals also put a sticker on the banner, saying, Put an end to COMAC (the youth organisation of the leftist PVDA party).

When someone in Belgium criticized Schild & Vrienden on Twitter, the far right responded with death threats. Like on the 4chan forum, popular with neonazis committing massacres in synagogues or mosques. The critic got death threats from someone calling himself ‘the Flemish Trump‘ on 4chan. And on the forum Make Vlaenderen [Flanders] Great Again (called after the Donald Trump slogan Make America Great Again) of Schild & Vrienden.

That the extreme right attacks especially Anuna De Wever and the pro-climate movement is not so surprising.

British nezi leader Nick Griffin denies not only the Holocaust, but climate change as well.

In the Netherlands, the far-right FvD party denies climate change. They are the only party saying that the gas drilling by Shell and Exxon oil corporations in Groningen province should carry on this way, even though it causes enormous earthquake damage. Not even the right-wing pro-Big Business VVD government party agrees with that.

What does this violence by the Belgian extreme right against 18-year-old and younger girls remind me of?

In Nigeria, Shell bribed soldiers and hired thugs for violence against environmentalists. Likewise, in Ireland, Shell hired thugs for attacking small farmers and other residents opposed to anti-environment Shell plans.

That the far right so violently attacks Anuna De Wever, like they attack 16-year-old Swedish climate activist Greta Thunberg, is a sign of weakness. They have only one ‘argument’ against climate change science: thuggish violence.