In the latest act of police violence in France, dozens of riot officers surrounded a group of peaceful climate change protesters sitting on and blocking a road in Paris on Friday, dousing them in pepper spray and assaulting them.

The police attack occurred on the Pont Sully, which crosses the Seine River. A group of around 50 protesters were sitting on the bridge and blocking traffic. As the police began dousing them in pepper spray, they raised their hands above their heads and shouted “nonviolent.” The police then charged the group with shields raised and began dragging them away. Videos of the event show the police using pepper spray against those who come to pour water on protesters who have already been sprayed.

For the next 10 minutes, the police stroll around the group, spraying into their faces from 20 centimeters away and ripping protective goggles off them, as dozens of onlookers stand and film with their phones.

The scene in Paris, videos of which have been shared thousands of times and triggered an outcry on social media, recalls the police’s pepper spraying of University of California Davis students protesting social inequality and tuition fee increases in November 2011.

It occurs amid the Macron administration’s massive mobilization of riot police over the past six months to violently repress “yellow vest” protesters opposing social inequality, austerity and the slashing of taxes for the super-rich.

More than 12,000 people have been arrested, and police have used tear gas, rubber bullets, baton charges and attack dogs, while Macron has deployed the military to the streets and leading French officials have called for the use of live ammunition to “put an end” to the protests.

Twenty-three protesters have lost the use of an eye after being shot by police rubber bullets, five have lost a hand from stun grenades, and one protester has lost a testicle.

Zineb Redouane, an 80-year-old retiree from Marseille, was killed by police on December 1, 2018, after she was hit in the face by a police stun grenade while closing the blinds of her apartment.

Not a single police officer has been criminally charged.

the successor of Nicolas Hulot, who resigned from the Macron administration, being sick of its lack of pro-climate pro-environment policies

the former Socialist Party deputy who moved with Macron to form La Republique en Marche in 2017, defended the police assault in Paris on Friday, telling BFM-TV: “These are very radical militants with supposedly nonviolent but completely paralyzing methods. The riot police had to be mobilized to take them one by one. It finished with gas aimed at making them leave.” 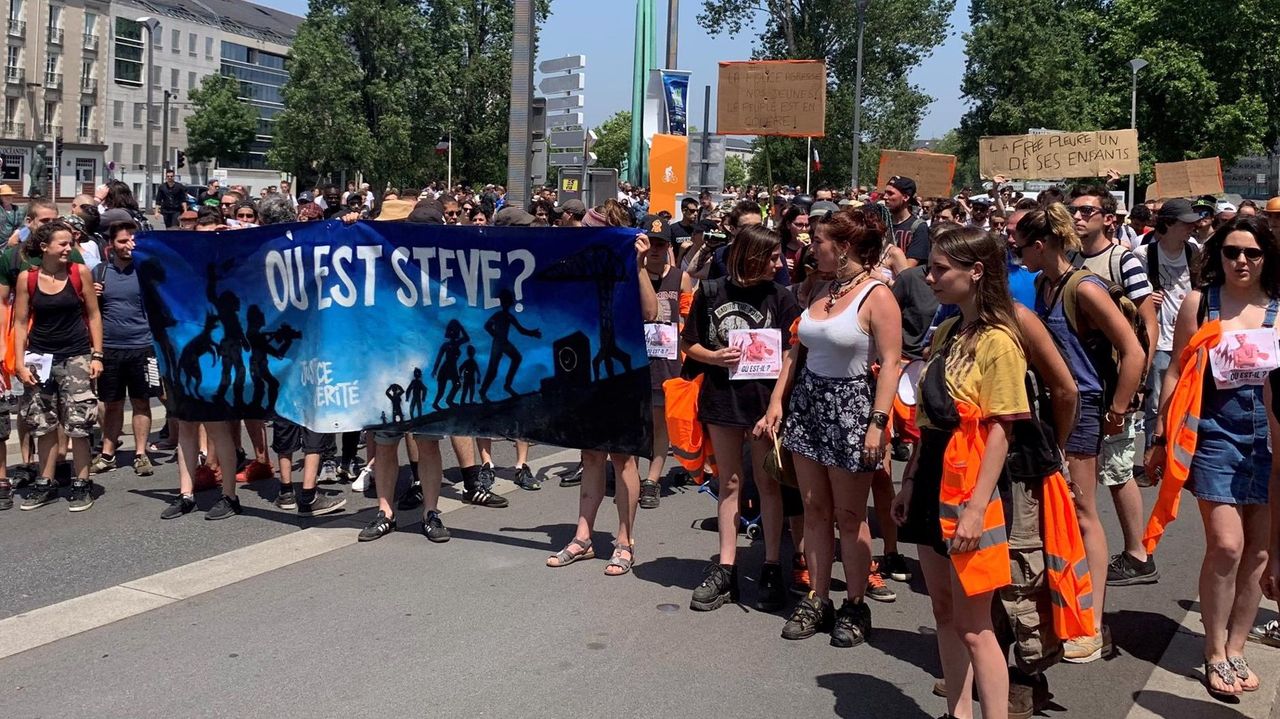 The police assault took place the day before a march of 1,000 young people against police violence in Nantes, the sixth-largest city, located in the far west of the country. The protesters demanded justice for Steve Caniço, a 24-year-old animator who disappeared and is feared to have drowned in the Loire river on June 21, due to a police crackdown on a techno music festival that night. The demonstrators carried a banner reading “Where is Steve?”

The police claim they launched the assault on the festival because the music went on for half an hour past the authorized ending time of 4:00 a.m.

In response to late music, they entered the festival grounds with attack dogs and riot shields and shot tear gas. Fourteen people jumped into the Loire River to escape, including Steve Caniço, who has not been seen since.

The massive escalation of police violence in France is part of a shift to the right and the building up of police states by capitalist governments throughout Europe and internationally. It is a response to the massive growth of social inequality, and an initial growth of strikes and demonstrations by workers and young people seeking to oppose environmental destruction, social inequality, militarism and capitalist oppression. The ruling class is responding to the first signs of popular opposition with the development of a police state and the elevation of fascist and far-right political forces.

The climate protest attacked by police in Paris on Friday was organized by Extinction Rebellion. The group organized protests in the UK this year that were met with a brutal crackdown. In the course of two weeks of protests in April, more than 10,000 police were deployed and arrested 1,130 people. The London police are pressing to charge every one of the people arrested in the protests.

Extinction Rebellion was founded in May 2018 in the UK and launched with an open letter in October by a group of environmentalists.

Two hundred thirty years after the storming of the Bastille prison launched the French Revolution in 1789, President Emmanuel Macron’s government carried out mass preventive arrests, rounding up well known “yellow vest” protesters on Bastille Day in Paris yesterday. Macron was booed and jeered as he drove in the motorcade down the Champs-Elysées on the traditional military parade Sunday morning: here.

One month since Steve Caniço’s disappearance in police raid in Nantes, France. Macron threatens: “Calm must be restored in the country”: here.

On Monday evening, a river pilot discovered the body of Steve Maia Caniço, who drowned in the Loire River during a violent police raid on a techno music festival at the Quai Wilson in Nantes on June 22: here.

Research published in this week’s issue of Nature Communications reveals a considerable chance for an ice-free Arctic Ocean at global warming limits stipulated in the Paris Agreement. Scientists from South Korea, Australia and the USA used results from climate models and a new statistical approach to calculate the likelihood for Arctic sea ice to disappear at different warming levels: here.