This 26 September 2018 video says about itself:

Leopold II of Belgium: The Biggest Coverup In European History

Ostend [city in Belgium] has provided a controversial statue of King Leopold II with a plaque with more information about the monarch. The new text now also focuses on his bloody colonization of Congo.

Leopold at the end of the 19th century on his own initiative ordered to colonize an area in Africa, 75 times larger than Belgium. He ran the Congo Free State as a private colony with brute force: the local population was exploited, tortured and maimed.

In Ostend Leopold, however, was honoured with an equestrian statue in 1931, flanked by statues of Belgian fishermen who thanked him for his support of the city and Congolese who honoured him “for the liberation from slavery by the Arabs.”

A group of residents of Ostend has been conducting action against the statue. Thus, in 2004 they sawed off the hand of a Congolese in the group of statues, a reference to the brutal punishment that was often applied to the indigenous population [under King Leopold II]. Also they repeatedly removed an explanatory plaque. 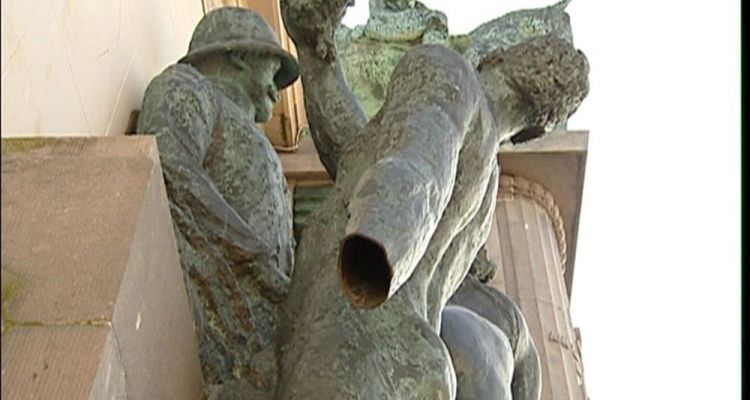 “The colonial policy until today still causes big controversy” the new information board says, which two Congo experts have co-written. The severed hand of the statue is explicitly mentioned, though there is no further explanation of its meaning. However, it is noted that many of the investments at that time in Brussels and Ostend were paid by the profits from the colony.

The Councillor of Culture hopes that the activists will now leave the statue alone. “I especially hope that the plaque this time will stay. That always costs us time and money. We do have bigger problems in our city,” he told VRT TV.

Whether this will actually happen is the question: “I heard that they think the text is not sharp enough, they are only moderately enthusiastic”.

The affair is similar to the vicissitudes of the statue of J.P. Coen in Hoorn [town in the Netherlands]. While he was Governor General of the Dutch East Indies he increased his grip on the country with bloody campaigns against the local population.

After protests, the text on the pedestal of the statue was adapted in 2012. Now Coen’s crimes in the East are also mentioned.

In 2004 a mysterious group abducts the hand of a statue, part of a monument for King Leopold II. This as an act of political activism. They would catalyse a surreal chain of events, in the best Belgian tradition. A little girl reconstructs the story…

‘Sikitiko’ is a short by Pieter De Vos, licensed under creative commons.