During the air raid on a refugee camp in Tripoli, guards may have shot migrants. The United Nations says it has reports that those who tried to escape the bombing were shot at.

3 key messages after air strikes killed many migrants&refugees at a Libyan detention centre: they must NOT be detained; civilians must NOT be a target; Libya is NOT a safe place of return. And of course, states with influence must cooperate to end conflict, rather than fuel it. https://t.co/rKqOcsy07Q

Because the refugees from bloody regime change wars in these Libyan torture camps are slaves. And the slave owners did not want their human ‘property’ to become free.

It reminds me a bit of the 1852 novel Uncle Tom’s Cabin on slavery in the USA. That book describes how armed slave hunters tried to capture fugitive African slave woman Eliza and her small child again. After a very dangerous crossing of ice floes in the Ohio river, Eliza and her child made it to freedom.

Unfortunately, it looks like the slaves in that Libyan camp did not make it to freedom.

Slavery was abolished in Libya in 1853; and came back after the ‘humanitarian’ 2011 NATO war on Libya. In 1853, slavery was still a ‘peculiar institution’ in, eg, the Dutch colonial empire. And in much of the USA. Where it was only ended after a bloody civil war by the victors, the federal government of Abraham Lincoln.

The detention center in Tajoura, in the east of the Libyan capital Tripoli, was the target of two air strikes. At least 53 people died, including six children. 130 were injured. Those numbers can still rise because bodies are still being removed from the rubble.

It is the deadliest bombing in a new conflict in Libya. The warlord Khalifa Haftar has been trying to conquer Tripoli since April, during which many bombardments are carried out on the city.

Whoever carried out the attack has yet to become clear from further investigation. According to Michelle Bachelet, envoy of the UN, it may be a war crime.

It look like Macron-Haftar warplanes bombed the camp, killing refugees. And that then Salvini-Tripoli gunmen shot at refugees trying to escape the bombing and slavery.

Bombing of detention center in Libya kills at least 44 refugees

Scores of African refugees were killed or wounded when the detention center in which they were being held in an [eastern] suburb of the Libyan capital of Tripoli took a direct hit in a bombing early Wednesday.

Libyan officials reported that 44 of the refugees had been killed outright and another 130 wounded, but the death toll was expected to rise as bodies were still being pulled from the rubble and many of those wounded suffered grievous injuries. Survivors of the bombing were seen late Wednesday still huddled near the bombed-out detention center, terrified of another attack and having no means of seeking safety.

Photographs published by the Libyan media showed a horrific scene, with the floor of the detention center, located in a hangar-style building, littered with bodies, severed limbs, clothes, bags and mattresses, and the walls covered in blood. 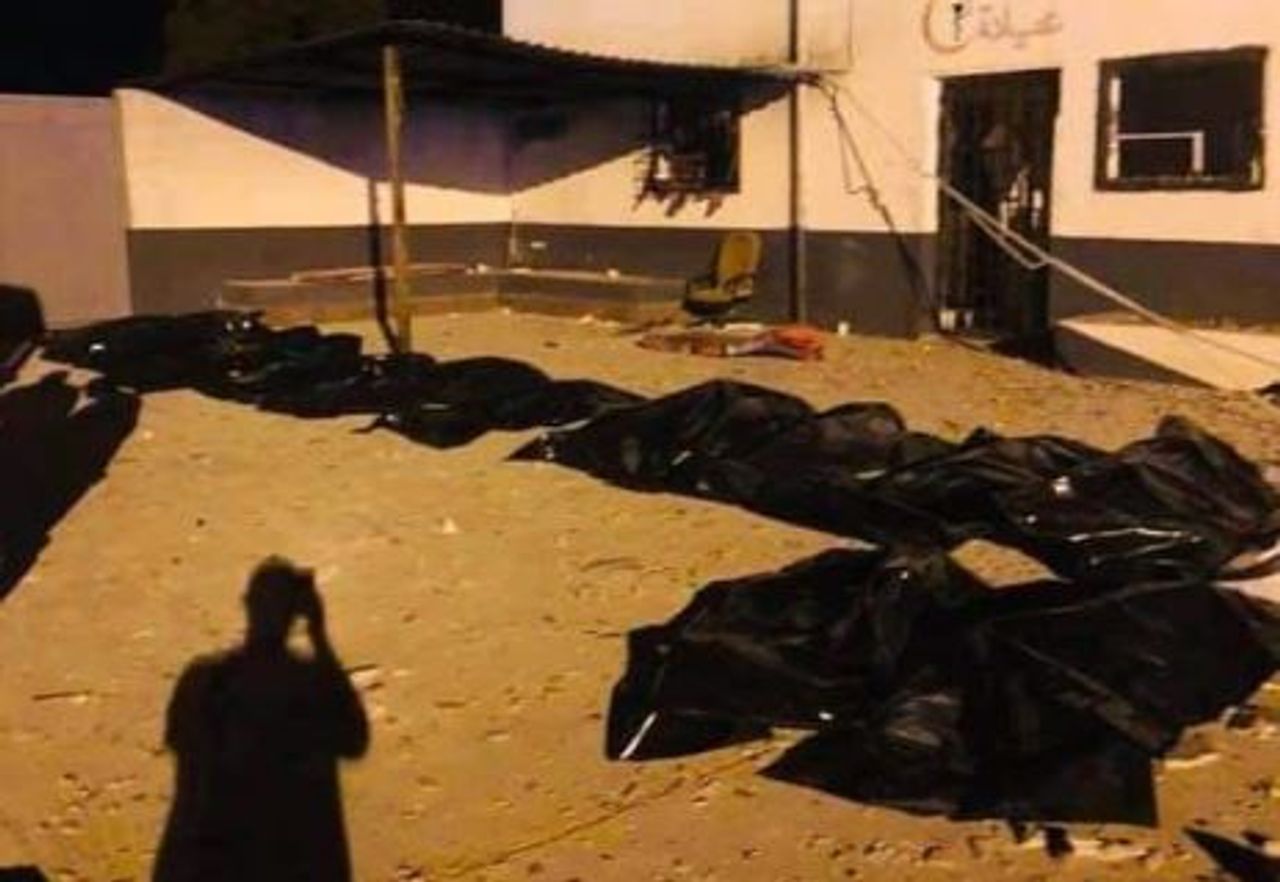 The attack was the bloodiest single incident in a renewed civil war that has gripped the country for the past three months, killing at least 700 people and displacing an estimated 90,000.

The Tripoli-based government blamed the attack on warplanes supporting the Libyan military strongman “Field Marshal” Khalifa Haftar, whose forces have laid siege to Tripoli since April in a bid to topple the UN-backed President Fayez Serraj, whose weak puppet regime is dependent upon a collection of Islamist militias for support.

Haftar’s forces, with their strongholds in eastern and southern Libya, claim to act in the name of a rival government located in Tobruk based upon a House of Representatives elected in 2014. They insisted that the damage was done by a mortar attack by militias supporting the Tripoli regime. Borrowing a page from the Pentagon, a statement issued in the name of Haftar’s Libyan National Army (LNA) stated, “Our air forces are meticulous in their targeting and take into account all the measures that protect civilians.”

The LNA had announced on Monday that it would carry out increased airstrikes on the Libyan capital as “traditional means” of besieging the capital were not working, according to Al Jazeera. It warned civilians to stay away from areas of “confrontation”.

Of course, the African refugees, detained against their will and under inhuman conditions by the Libyan regime and its militia backers, had no means of heeding this advice. The hangar where they were imprisoned was located adjacent to military facilities belonging to the militias in the eastern Tripoli suburb of Tajoura.

After its roof was damaged in an attack two months ago, the United Nations High Commissioner for Refugees (UNHCR) issued a warning about the dangerous position of the prison.

“We called for an urgent evacuation then; they remained detained inside that center and sadly people have paid the tragic price of that with their lives last night,” Charlie Yaxley, spokesman for the Mediterranean and Africa at the UNHCR, told Al Jazeera.

The LNA’s escalation of its airstrikes follows the fall of the town of Gharyan, about 50 miles south of the capital, to militias backing the Tripoli regime. The LNA had taken the town in April and had been using it as a base for its siege of Tripoli.

The reversal of fortunes for Haftar’s army followed Turkey’s more aggressive intervention in support of the government of President Serraj, providing it with arms and flying armed drones out of the Tripoli airport on its behalf. The LNA claims to have destroyed three of these drones on the tarmac.

The LNA, meanwhile, has received major military support from the dictatorship of Gen. Abdel Fattah el-Sisi in Egypt, as well as from the Persian Gulf oil monarchies of the United Arab Emirates and Saudi Arabia. Both Egypt and the UAE have sent warplanes to provide air cover for the LNA. The aim of these regimes, which constitute Washington’s closest allies in the Arab world, is to install a military-dominated dictatorship along the lines of what exists in Cairo.

While the US and European powers are all formally committed to supporting the puppet regime of President Serraj in Tripoli, President Donald Trump spoke by phone with Haftar, after he had launched his offensive in April, discussing what the White House described as their “shared vision” for Libya.

Haftar, a former general in the Libyan army who turned coat after being captured during Libya’s war with Chad in the 1980s, was brought by the CIA to the US, living for 20 years near the agency’s headquarters in Langley, Virginia. He was sent back to Libya to join the US-NATO war for regime change in 2011 that ended in the toppling and lynch mob murder of the country’s long-time ruler, Muammar Gaddafi.

Last week, it was reported that militias loyal to the Tripoli regime captured US-made Javelin anti-tank missiles after taking control of an LNA base. The missiles were in shipping crates whose markings indicated that they had been provided by Washington to the UAE.

The United Nations Security Council held a closed-door meeting late Wednesday on the latest atrocity in Libya but was unable to produce a statement condemning the attack because the US representative refused to sign on without approval from Washington. This under conditions in which various governments and agencies have denounced the slaughter of refugees as a crime against humanity.

The hypocrisy of these denunciations is breathtaking. The mass killing that took place outside of Tripoli is the direct outcome of policies pursued by all of the major imperialist powers in their drive to lay hold of Libya’s oil reserves, the largest on the African continent, and in their global war against refugees.

The US-NATO rape of the country in 2011, carried out under the false banner of “human rights” and preventing an allegedly imminent massacre of dissidents in the eastern city of Benghazi, killed tens of thousands of Libyans and destroyed the country’s infrastructure and institutions, setting the stage for eight years of unending conflict and civil war.

Meanwhile, the fate of those slaughtered in Tajoura, along with that of thousands of others held in camps throughout Libya, is the direct result of a reactionary campaign waged by the major European powers. They have trained, armed and financed the Libyan coast guard to intercept refugees seeking to escape war, oppression and poverty by crossing the Mediterranean. Those who are captured are returned to concentration camps in Libya, where they are imprisoned under conditions that have been described as tantamount to torture, in many cases held for ransom, sold into slavery or murdered.

A particularly foul and crucial role in this imperialist onslaught has been played by an entire coterie of pseudo-left organizations, politicians and academics in Europe and America who amplified and embellished upon the phony pretexts of “humanitarian” intervention to justify a war of imperialist aggression against a former colonial country.

UN: LIBYAN GUARDS REPORTEDLY SHOT AT FLEEING REFUGEES The United Nations said Thursday it had information that Libyan guards shot at refugees and migrants trying to flee from airstrikes that killed at least 53 people, including six children, in a migrant detention center late on Tuesday. [Reuters]

There is growing worldwide outrage at the numbers of refugees dying in the Mediterranean and the inhumane conditions in Libyan refugee camps, where people are tortured and die horrifically. After the courageous captain of the Sea Watch, Carola Rackete, landed shipwrecked asylum seekers in Lampedusa, defying an Italian government ban, more than half a million people signed a petition supporting her and quickly raised €1.5 million for her legal defence. Sixty German cities and towns agreed to accept the refugees. The EU has responded with new plans to expand its war on refugees. It is considering military operations in the civil war in Libya and in the Sahel to take over prisons and establish new concentration camps, which are referred to as “transit centres” and “disembarkation platforms.” Military patrols are to block the coast of the Maghreb. Alongside the EU Foreign and Home Affairs Ministers meetings taking place this week, more and more similar demands are being raised: here.