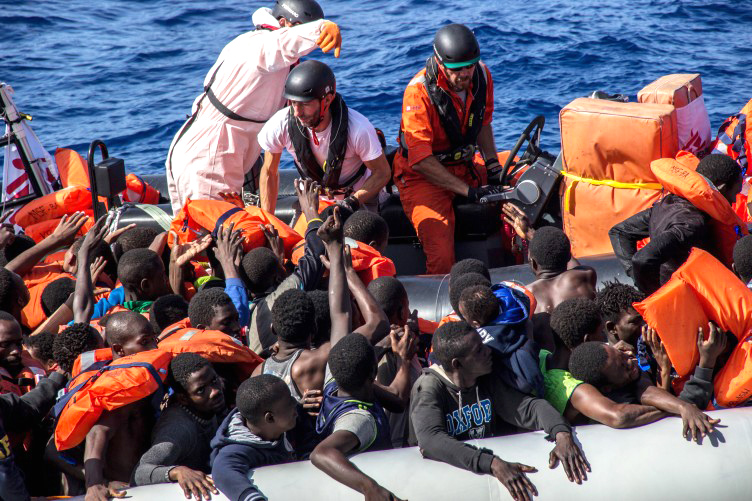 WARS in Syria and Afghanistan are driving refugees through Turkey as they make their way to Greece. Many land on the Greek island of Lesbos, which is now an epicentre of the country’s migrant crisis.

It’s a dangerous journey – but one made slightly easier by Refugee Rescue, the last remaining humanitarian rescue boat in the area. 16,000 refugees have fled to a Greek island this year.

With a crackdown on refugees in Turkey, and tough immigration policies elsewhere in Europe, the number of people fleeing to Lesbos by sea has soared to more than 16,000 this year, according to the UN.

That’s the biggest influx since 2016. As the only NGO left in Lesbos with a rescue boat, the group is working overtime, all the time.

‘We are tired, we are tired,’ said Giannis Skenderoglou, a crew coordinator for the group. ‘But that, that’s our job.’

Refugee Rescue said: ‘Refugee Rescue is a grassroots NGO operating a skilled Search and Rescue (SAR) team on the North Shore of Lesbos, Greece. Our boat crew and rescue vessel “Mo Chara” are on call 24 hours per day, ready to assist those in distress at sea.

‘Onshore, our land teams man spotting operations that keep watch along the treacherous coastline, and work alongside partners to provide emergency relief for those who have just arrived.

‘Refugee Rescue was founded in response to inadequate SAR infrastructure in 2015 when thousands of people were arriving to the island by boat, having been displaced by war, conflict and persecution.

‘Dinghies often directly navigate towards dangerous rocks or shallows that can easily break the floor of these flimsy rubber boats, causing them to sink or capsize.

‘Smugglers abandon groups of refugees on rocks and inaccessible beaches. Many boats also land on treacherous rocks and people are then stranded in locations that are difficult to reach. There is no cliff rescue here, no helicopter to come and help them, and people are often impossible to reach from land.

‘Hundreds have already lost their lives and people are still crossing the perilous stretch of water between Turkey and Lesbos every day. As long as people are denied safe passage to Europe, they will continue risking their lives unnecessarily, forced to take what is now one of the world’s most dangerous migratory routes in search of refuge.

‘By offering a consistent and skilled emergency response along this treacherous coastline, we seek to make this journey a little less deadly, with the hope of stopping any more lives being needlessly lost to The Aegean.’

Meanwhile, Médécins Sans Frontieres (Doctors without Borders) issued its own statement on Libyan refugees and migrants.

‘People are detained simply because of their migration status in overcrowded conditions, with a lack of access to sufficient food, water or medical treatment.

‘A recent assessment of just one of these centres found alarming levels of malnutrition, with some people held in a room so small there was no space to lie down. Worse still, one third of the people detained indefinitely in this centre were children.

‘But in recent days, things have got even worse. Fighting in and around Libya’s capital Tripoli led directly to the deaths of 40 vulnerable migrants and refugees after a detention centre in Tripoli was hit by an airstrike on 2 July.

‘Trapped in these centres, and at severe risk of being caught in the crossfire, migrants and refugees are unable to flee the fighting and are suffering from increased disruption to food and other supplies – some report not having eaten for days.’

Just seven of the 28 EU member nations agreed to launch a new system to help those rescued in the Mediterranean. A large majority of European Union member countries have refused to back a plan to quickly get migrants off boats in the Mediterranean Sea and distribute them among willing EU partners.

At a meeting of EU interior ministers, only Ireland, Luxembourg and Portugal offered to take part in the ‘fast-track’ plan drawn up by Germany, France, Italy and Malta, which would screen migrants, relocate asylum seekers and return people who do not apply or qualify for asylum, all within four weeks.

‘We were seven yesterday, seven this morning and seven this evening. So things haven’t changed much,’ said a downbeat Jean Asselborn, Luxembourg’s minister responsible for migration. ‘Why us, and why no one else?’

For more than a year, humanitarian ships that have picked up migrants from Libya in unseaworthy boats were blocked from docking or disembarking passengers in Italy or Malta. Italy’s former anti-migrant interior minister even threatened to jail the crews of charity-run rescue ships.

The stance taken by the two countries resulted in standoffs that kept rescued migrants at sea for weeks until other EU nations pledged to take at least some of the people seeking safety or better lives in Europe.

Tuesday’s meeting in Luxembourg had been meant to gauge enthusiasm for the temporary plan, in which countries would make ‘pre-declared pledges’ on how many asylum seekers they would accept. Details of the scheme are sketchy, but it would operate for at least six months, unless migrant arrivals increase dramatically.

‘I think there are around ten countries that are ready to play the game. Perhaps others,’ she told reporters. ‘We are going to be able to say that when a boat arrives, we know who to call and that there are countries ready to send teams in.’

But Italian Interior Minister Luciana Lamorgese said that those who agreed to take part ‘are those three or four states that had already said they were available, like Luxembourg and Ireland.’ She said she hoped that more EU partners would sign on by the end of the year.

Asselborn said that … those opposed to migrant-sharing quotas in the past – countries like Austria, the Czech Republic, Hungary, Poland and Slovakia – ‘remain against it’.

Well over a million migrants arrived in the EU in 2015, most of them refugees from countries at war like Syria or Iraq, sparking one of Europe’s biggest political crises as nations bickered over who should take responsibility for them and how much others should be forced to help.

New arrivals have now dropped to their lowest levels in about seven years, particularly between Libya and Italy, but EU countries are still unable to agree on the best way forward, and far-right and anti-migrant parties have taken advantage of the confusion.