This 20 August 2019 video from Germany says about itself:

Why I fight for solidarity | Pia Klemp | TEDxBerlin

Visit our website www.tedxberlin.de for more information on Pia Klemp.

Captain Pia Klemp is a vegan natur-lover, animal-rights and human-rights activist. She spent the last seven years onboard various NGO vessels and oceans, fighting against illegal whale hunt and illegal fishing. Since summer 2017 she captained Search & Rescue vessels in the Mediterranean Sea to help refugees and migrants in maritime distress on their dangerous route to safety in Europe.

Since June 2018 Klemp and nine other crew members of the IUVENTA are under investigation for ‘aiding and abetting illegal immigration to Italy’ – because they saved the lives. The IUVENTA and its crew were involved in the rescue of over 14,000 people in distress at sea. Today they face up to 20 years in prison.

What lies ahead of the crew is a marathon – not a sprint. The trial is expected to last between 3 and 4 years and the total cost of the trial will be 500,000 €. The iuventa10 are fighting a legal and political fight against the criminalization of solidarity with refugees and migrants.

“We are all equal!” Captain who saved refugees refuses award from Paris mayor

Pia Klemp, the former captain of the refugee rescue ship Juventa, who together with her crew saved thousands of refugees in the Mediterranean Sea, is refusing to accept an honorary prize bestowed by the Socialist Party

The 36-year-old from Germany announced her decision in a post on her personal Facebook page on Tuesday. She states:

“Madame Hidalgo, you want to award me a medal for my acts of solidarity in the Mediterranean Sea, because our crews ‘work daily to save migrants in difficult conditions.’ At the same time, your police steal blankets from people forced to sleep on the street, while you repress demonstrations and criminalize those who defend the rights of immigrants and asylum seekers. You want to give me a medal for acts that you oppose within your own borders. I’m sure you will not be surprised to see me refuse your Grand Vermeil medal.”

Under conditions of the systematic promotion of nationalism and anti-immigrant chauvinism by the media and political establishments around the world, Klemp’s statement gives voice to the real sentiments felt by millions of workers and youth, who are outraged and disgusted by the ruling elite’s brutalization, persecution and murder of refugees.

Klemp’s post differentiates between the Paris authorities and the population who support refugees. “Paris, I love you for all of the free people and those in solidarity who live there. People who fight for freedom every day … distributing blankets, friendship and solidarity. I love you for those who share their houses … without worrying about the nationality of people or if they have legal papers or not.”

“Paris, I am not a humanitarian,” the statement continued. “I am not here to ‘help’. I am in solidarity by your side. We do not need medals. We do not need authorities who decide who is a ‘hero’ and who is ‘illegal’. In fact, there is no basis for this, because we are all equal.”

“What we need is freedom and rights. It is time to denounce the hypocritical honours and fill in the void with social justice. It’s time for all medals to be thrown like spearheads of the revolution! Papers and housing for all! Freedom of movement and residency!” 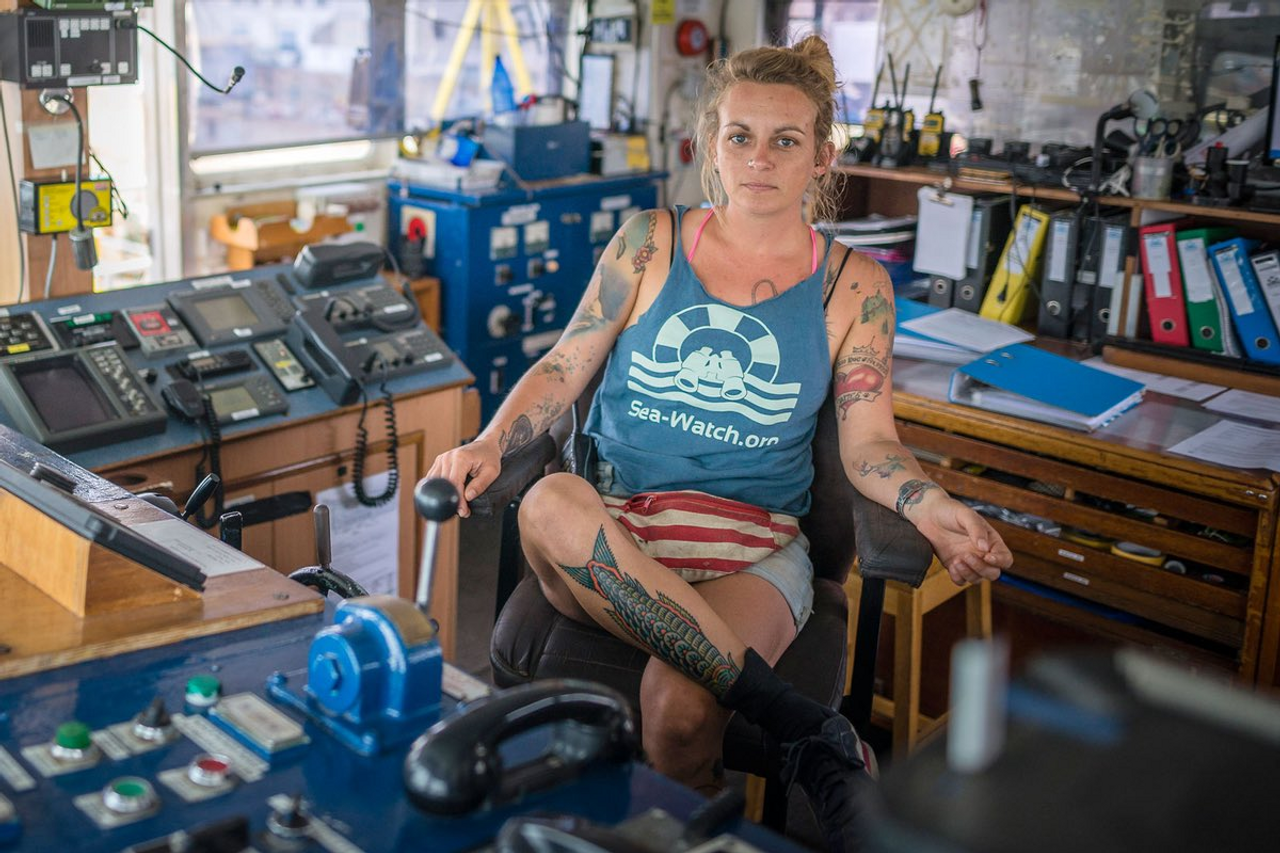 The post also included an image of the Hidalgo government’s installation of boulders under the Porte de la Chapelle bridge in February 2017, in order to prevent refugees from erecting tents to sleep there.

On Wednesday, Hidalgo’s deputy for international affairs Patrick Klugman tweeted in response to Klemp’s refusal that “your concerns are justified and questions legitimate”, and invited Klemp to “come to Paris to show you the means we’ve put in place to welcome migrants with dignity.”

In the eyes of the Socialist Party, “welcoming” refugees with “dignity” means throwing them into the street like wild dogs for years on end, with no housing, income, food, or right to work. Between 1,500 and 2,000 refugees sleep homeless every night in tent encampments in the north-eastern suburbs around La Chapelle alone. Many have been in the country for over two years, dependent upon private citizens and charities to survive and offered no pathway out. This anti-immigrant regime is overseen by the Macron administration and supported by the entire French political establishment.

Klemp’s statement is a condemnation of not only the Socialist Party, but the criminal anti-immigrant policies of the Macron administration and the European Union (EU).

The Italian government arrested Klemp and her crew and seized the Juventa in August 2017. They face charges of “aiding and abetting illegal migration” because of their actions in saving up to 14,000 refugees seeking to travel from Africa to Europe via the Mediterranean. Italy’s fascistic interior minister Matteo Salvini has not been able to proceed with the charges in over two years, aware of the absence of any legal basis for the case and the widespread support for the rescuers in the working class.

Pia Klemp is facing unfair and fake accusations of adding illegal immigration, in this video you will find our analysis of the situation.

We find a complete injustice in the fact that someone is accused in justice just because she is fulfilling her duty of saving human lives.

Even more because she is acting according to the international maritime conventions SAR, SOLAS and UNCLOS.

The Will Morrow article continues:

More than 393,000 people have signed a petition demanding the dropping of all charges against Klemp and the other crew members. A fundraising campaign for their legal defense has raised over 380,000 euros. Similar numbers donated and signed petitions for the freeing of Carola Rackete, the 32-year-old who took over captaincy of the Sea-Watch 3 from Klemp, and who was arrested by Salvini in May after defying an illegal ban by the Italian government on arrivals of rescue ships carrying refugees.

Both Rackete and Klemp were offered the Paris prize in July, as part of the cynical and fraudulent efforts by the Macron administration, as well as the German and other EU governments, to posture as more “humanitarian” than the fascistic Salvini. But the truth, expressed in Klemp’s own statements, is that none of them have any substantial differences with Salvini’s policies at all.

The policy of the European Union toward refugees is one of conscious and deliberate mass murder. More than 14,000 refugees have drowned in the Mediterranean since 2014, but the real number is likely far higher. The EU has cancelled all rescue operations in the sea, instead providing funding, boats and arms to extreme-right Libyan militias to intercept asylum seekers and either allow them to drown or return them to EU-funded concentration camps in Libya, where they are forced to labor or directly sold into slavery, robbed, beaten, raped or killed.

The rescue ships such as those commanded by Klemp and Rackete have been targeted by the EU precisely because they have refused to return refugees to Libya and insisted upon the transferring them to a European port of entry. They have been systematically stripped of sailing rights and refused flags to sail under.

Since March, the EU governments have withdrawn all the ships previously supplied to “Operation Sophia”. This mission, which is supposedly responsible for saving the lives of refugees, now does not possess a single ship of its own, instead relying on aerial drones to observe immigrants drowning from above or direct Libyan forces to catch them.

To the extent there are differences, it is that Macron and Merkel believe that the attacks on refugees can be carried out more efficiently and provoke less outrage than via Salvini’s strategy.

That is why on July 22, Macron announced a new accord, initiated by Paris and Berlin, under the Orwellian title of the European “solidarity mechanism”. Its purpose, Macron explained, would not be to welcome more refugees, as one might naively believe from the title, but to “create mechanisms for the return to their countries of origin of those who do not have the right to asylum, in a manner that is much more rapid and much more efficient than that which we have today.”

Toronto International Film Festival 2019: Part 1. Paris Stalingrad: The plight of refugees in the French capital, once “one of the best cities”: here.

An interview with Hind Meddeb, director of Paris Stalingrad: “It’s not a film about refugees, it’s a film about human beings”: here.