Channel 4 News film on Andy Coles aka Andy “Van” Davy, undercover police officer with the Special Demonstrations Squad, who infiltrated the animal rights movement in the 1990s. Features interviews with “Jessica“, an activist with whom he had a longterm relationship and Paul Gravett from ARspycatcher, who campaigned alongside him and first publicly outed him as a spy in 2013. On 15 May 2017 Coles resigned as Deputy Police and Crime Commissioner for Cambridgeshire.

Andy Coles, crime commissioner, has now resigned after he was exposed as being a member of a police intelligence squad in the 90’s. Andy, who operated under false ID and employment background, lured young woman he was spying on for sex. Some of the unit apparently got girls pregnant, then vanished from the face of the earth. Coles was caught due to media photographs and exposed as being a member of the highly secretive spy unit. During the 80’s and 90’s police operated a number of these controversial units, including some in Northern Ireland. Even fellow police did not know of their existence. The IPCC is now investigating after a previous investigation they derailed.

Andy Coles infiltrated the peace movement before moving on to animal rights: here.

SPYCOP Andy Coles faced calls to resign as a Tory councillor in Peterborough last night, a week after a council meeting was shut down because of angry protests.

Peterborough City Council Labour leader Ed Murphy said allegations against Mr Coles were so serious that he should either refute them or resign, and Mr Murphy accused the Tories of refusing to sack Mr Coles in “a desperate attempt to cling on to power.”
Mr Coles was forced to step down from his role as Cambridgeshire & Peterborough deputy police and crime commissioner in May after being exposed as a former undercover police officer who spied on political activists.

His activities came to light after an eagle-eyed member of the public spotted a passing reference to Mr Coles’s double life by his brother, the former pop star Richard Coles, in his autobiography.

He pretended to be “Andy Davey,” a removal van driver from south London, when he started a relationship with a 19-year-old woman known as “Jessica.” She is taking action against the police as she feels she was groomed by Mr Coles.

“Although not legally underage, I feel that my youth and vulnerability were used to target me,” she said.

“I was groomed by someone much older, and far more experienced … I was manipulated into having a sexual relationship with him. I didn’t even know his real name.”

Mr Coles also stepped down from governor positions at two local schools following the revelations but he has refused to stand down as a Tory councillor.

A heated council meeting was closed down last week after protesters refused to take down a banner made by Mr Coles’s victim. They were angry that a public question asking for clarity over Mr Coles’s position as a councillor was ruled out of order. 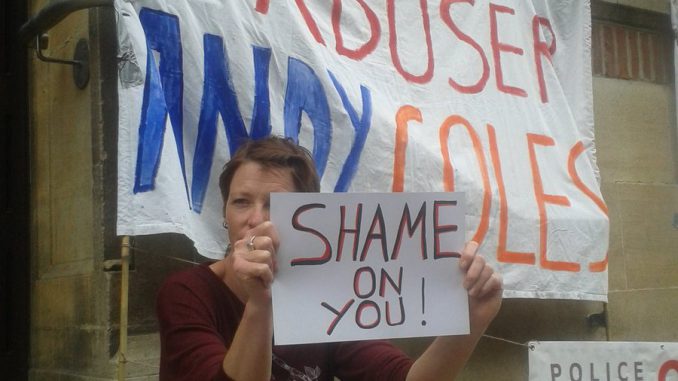 Mr Murphy told the Star that the council’s beleaguered Tory group was refusing to withdraw the whip from the discredited ex-cop.

“If they had a large enough majority, they would have got rid of him,” he said. And he revealed that councillors had been threatened with a gagging order from lawyers.

“The bottom line is that if he doesn’t stand down voluntarily, then a public campaign will force him to.”

Peterborough Conservatives had not responded to the Star’s request for comment as we went to press. However, their press officer is believed to be Andy Coles.