Aylan Kurdi father: ‘The most beautiful children in the world’

Aylan Kurdi‘s father Abdullah said that shortly after their boat left Turkey for the Greek island of Kos it was hit by waves and the captain swam off.

“I tried to catch my children and wife but there was no hope. One by one they died,” Mr Kurdi said.

The family were among thousands fleeing Syria and seeking a new life abroad.

Images of Aylan’s body being recovered from a beach near Bodrum caused an outpouring of sympathy for the plight of those fleeing Syria’s civil war and criticism of European governments for not doing enough to answer the crisis.

Thousands of migrants have died this year trying to reach Europe by sea.

“I tried to steer the boat but another high wave pushed the boat over. That is when it happened,” Mr Kurdi said.

“My children were the most beautiful children in the world. Is there anybody in the world for whom their child is not the most precious thing?” Mr Kurdi said.

“My kids were amazing. They woke me every day to play with me. What is more beautiful than this? Everything is gone.

“I would love to sit next to the grave of my family now and relieve the pain I feel,” he said.

Who is responsible for the refugee crisis in Europe?

The gut-wrenching images of a three-year-old Syrian boy washed up on a Turkish beach, lying face-down in the sand, his lifeless body then cradled by a rescue worker, have brought home to people all over the world the desperate crisis that is unfolding on Europe’s borders.

The family of the toddler, Aylan Kurdi, had come from Kobani, fleeing along with hundreds of thousands of others. A protracted siege by the Islamic State of Iraq and Syria (ISIS) and an intense US bombing campaign has left the northern Syrian city in ruins, its houses as well as water, electrical, sanitation and medical infrastructure destroyed. The boy was one of 12 who drowned in an attempt to reach Greece, including his mother and five-year-old brother. His distraught father, the family’s sole survivor, said he would return to Syria with their bodies, telling relatives that he hoped only to die and be buried alongside them.

There is plenty of blame to go around for these deaths, which are representative of many thousands more who have lost their lives trying to cross the Mediterranean or suffocated after being stuffed like sardines into overheated vans.

Canada’s Conservative Party government ignored a request made in June by the boy’s aunt, who lives in British Columbia, to grant Aylan’s family asylum.

The countries of the European Union have treated the surge in refugees as a matter of repression and deterrence, throwing up new fences, setting up concentration camps and deploying riot police in an effort to create a Fortress Europe that keeps desperate families like Aylan’s at bay and condemns thousands upon thousands to death.

But what of the US? American politicians and the US media are deliberately silent on Washington’s central role in creating this unfolding tragedy on Europe’s borders.

The Washington Post, for example, published an editorial earlier this week stating that Europe “can’t be expected to solve on its own a problem that is originating in Afghanistan, Sudan, Libya and—above all—Syria.” The New York Times sounded a similar note, writing: “The roots of this catastrophe lie in crises the European Union cannot solve alone: war in Syria and Iraq, chaos in Libya…”

What, in turn, are the “roots” of the crises in these countries which have given rise to this “catastrophe”? The response to this question is only guilty silence.

Any serious consideration of what lies behind the surge of refugees into Europe leads to the inescapable conclusion that it constitutes not only a tragedy but a crime. More precisely, it is the tragic byproduct of a criminal policy of aggressive wars and regime change interventions pursued uninterruptedly by US imperialism, with the aid and complicity of its Western European allies, over the course of nearly a quarter century.

With the dissolution of the Soviet Union in 1991, the US ruling elite concluded that it was free to exploit America’s unrivaled military might as a means of offsetting US capitalism’s long-term economic decline. By means of military aggression, Washington embarked on a strategy of establishing its hegemony over key markets and sources of raw materials, beginning first and foremost with the energy-rich regions of the Middle East and Central Asia.

This strategy was summed up crudely in the slogan advanced by the Wall Street Journal in the aftermath of the first war against Iraq in 1991: “Force works.”

What the world is witnessing in today’s wave of desperate refugees attempting to reach Europe are the effects of this policy as it has been pursued over the whole past period.

Decade-long wars in Afghanistan and Iraq, waged under the pretext of a “war on terrorism” and justified with the infamous lies about Iraqi “weapons of mass destruction,” succeeded only in devastating entire societies and killing hundreds of thousands of men, women and children.

They were followed by the US-NATO war for regime change that toppled the government of Muammar Gaddafi and turned Libya into a so-called failed state, wracked by continuous fighting between rival militias. Then came the Syrian civil war—stoked, armed and funded by US imperialism and its allies, with the aim of toppling Bashar al-Assad and imposing a more pliant Western puppet in Damascus.

The predatory interventions in Libya and Syria were justified in the name of “human rights” and “democracy,” receiving on this basis the support of a whole range of pseudo-left organizations … Some of them went so far as to hail the actions of Islamist militias armed and funded by the CIA as “revolutions.”

The present situation and the unbearable pressure of death and destruction that is sending hundreds of thousands of people into desperate and deadly flight represent the confluence of all of these crimes of imperialism. The rise of ISIS and the ongoing bloody sectarian civil wars in both Iraq and Syria are the product of the US devastation of Iraq, followed by the backing given by the CIA and US imperialism’s regional allies to ISIS and similar Islamist militias inside Syria.

No one has been held accountable for these crimes. Bush, Cheney, Rumsfeld, Rice, Powell and others in the previous administration who waged a war of aggression in Iraq based upon lies have enjoyed complete impunity. Those in the current administration, from Obama on down, have yet to be called to account for the catastrophes they have unleashed upon Libya and Syria. Their accomplices are many, from a US Congress that has acted as a rubber stamp for war policies to an embedded media that has helped foist wars based upon lies upon the American public, and the pseudo-lefts who have attributed a progressive role to US imperialism and its “humanitarian interventions.”

Together they are responsible for what is unfolding on Europe’s borders, which, more than a tragedy, is part of a protracted and continuing war crime. 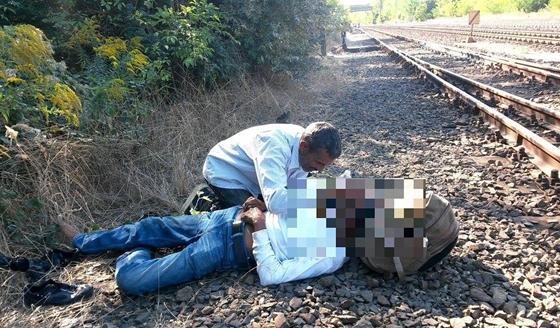 This is a  photo showing a refugee who died in Hungary today. He tried to run away from Bicske prison camp for refugees. Pursued by police, he fell with his head on the railway track, and died.

18 thoughts on “Refugees suffer, die, who is to blame?”