This video is about an El Lissitzky exhibition in the Van Abbe Museum in Eindhoven in the Netherlands.

Today, to the Van Abbe museum.

From the site of the Van Abbe museum, (the text which used to be there):

Forms of Resistance is a plea for the political potential of art as a form of cultural criticism. How have artists dealt with social and political issues from 1871 until today? The exhibition is based on four historic events: the French Commune in 1871, the Russian Revolution [of 1917], May [19]68 and our world after 11 September 2001. Forms of Resistance is a searching and inciting exhibition about the amalgamation of art and life. What role have artists played in major social upheaval in the past 135 years? Do changes in the arts precede, coincide with or follow social change?

The exhibition is intended as more than just a platform for the presentation and documentation of social and political commitment among artists. Forms of Resistance is not merely an overview of art projects, it examines and combines a number of different historical exhibition models.

This is quite a sizeable exhibition, filling ten halls and one corridor of the museum. Nevertheless, there is no extra admission charge for this special exhibition beyond the one for the museum itself (meaning that if you have a Dutch “museum card” you can visit the exhibition for free).

That is sympathetic, and seemingly in line with the idea that for art; and/or for social change, or, to use a stronger term; revolution, to succeed, it needs to be accessible to masses of non-affluent people.

However, both as one enters and as one leaves the exhibition, some of it contradicts that need of accessibility. The first hall of the exhibition is about the 1871 Paris Commune, and its aftermaths in the art and labour worlds till about 1914.

This video is about the film by Peter Watkins, La Commune (Paris 1871).

The organizers made the fine decision to have in this hall a video of the movie by Peter Watkins on the Paris Commune. Fine indeed … however, the sound and text parts of the movie version here are in French. The (incomplete) subtitles are in English. Working class people, the subject of Watkins’ film, are today in the Netherlands less likely to be fluent in English. Let alone in French. So, why no subtitles in Dutch?

This video is Part 1 of the complete film by Watkins, in French; with Brazilian Portuguese subtitles.

Hall number ten is the last hall of this exhibition. There is a similar problem there as in hall number one with the video and its lack of Dutch subtitles. Hall number ten is about Italian artist Marco Scotini, who made works about subjects ranging from Italian workers’ struggles in the 1970s till the ‘anti globalization’ movement from Seattle 1999 till now, with the demonstrations in Rostock/Heiligendamm in Germany this year being freshest in memory. However, the captions with the art are in Italian, French, and English. Which, again, may damage accessibility here in Eindhoven to many people without whom society cannot be changed.

Let us now return to hall number one.

At the time of the 1789 French revolution, there had been a link between classicists in art and political revolutionaries: in the sense that artists expressed the ideals of simplicity of the ancient Roman republic, example for the new French republic, in contrast to the opulence of the royal court.

As the nineteenth century progressed, there were changes in both politics and art.

The bourgeoisie progressed from being a class in opposition to a ruling class.

In revolutionary movements, there was a shift from the bourgeoisie to the working class, as seen in the Paris Commune of 1871. Special for the Paris Commune election was, that in working class districts, the majority of people came out to vote; while in rich neighbourhoods, only about 40% did. Often, even today, election figures are the reverse of that.

At the same time, the role of classicism in art changed. It had been a big influence on pro 1789 revolution artists like David.

In the course of the nineteenth century, more and more, it became a conservative pro establishment set of rules, seen as stifling by artists who wanted to innovate.

The second half of the nineteenth century brought new artistic movements to France, rebelling against the rules of classicism and the Academy of Arts.

Two important ones of those were the realism of Gustave Courbet and others, and the impressionism of Edouard Manet and others.

Like Russian painter Ilya Repin, Courbet and Manet were sympathizers of the Paris Commune.

Both works by Manet and by Courbet are represented in hall number one of the Eindhoven exhibition. 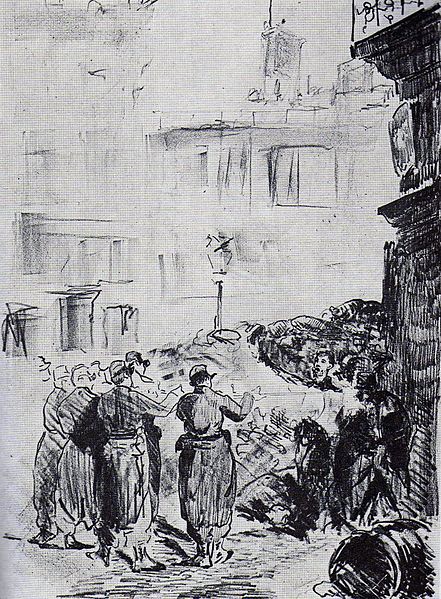 In the days of the Commune, Courbet was chair of a commission on art which abolished the Academy.

Then, the classicist style monument of the dynasty of Emperor Napoleon III, the Vendôme column, was destroyed.

After the bloody suppression of the Commune, Courbet’s Rightist enemies accused him of personal responsibility for this, with faked photographs as ‘evidence’; and he had to flee to Switzerland.

A museum worker told me that for this exhibition, they had tried to get Courbet’s more “political” paintings. However, that proved to be impossible. The reason for that may be that right now, there is a big exhibition in Paris of over 150 works by Courbet, from all over the world. They had to settle with landscape paintings by Courbet, borrowed from Belgian museums.

One of those paintings was specially significant to me, as it depicted the river Loue, near Courbet’s native town of Ornans. I have seen the impressive karstic source of the Loue.

The Van Abbe museum worker said that though Courbet’s landscapes at the exhibition are not that political, they still document how his realist painting style evolved.

In hall number one, there was much graphic work from the late 19th-early 20th century labour movement, commemorating the Paris Commune and other subjects.

For instance, there was a poster for a 1895 British memorial meeting for the Paris Commune. Speakers there included British socialist artist William Morris; British socialist politician Hyndman; Russian anarchist Kropotkin; Karl Marx‘ daughter Eleanor. And Annie Besant, then slowly evolving from socialism to Theosophy, including more conservative ideas on society and politics.

The nineteenth century saw also the rise of the women’s movement; shown in Watkins’ Commune film. And also reflected in the avant-garde art movements at the time of the 1917 Russian revolution (women and that revolution: here); with which we will continue in the second part of this Eindhoven exhibition review, after concluding this first part.