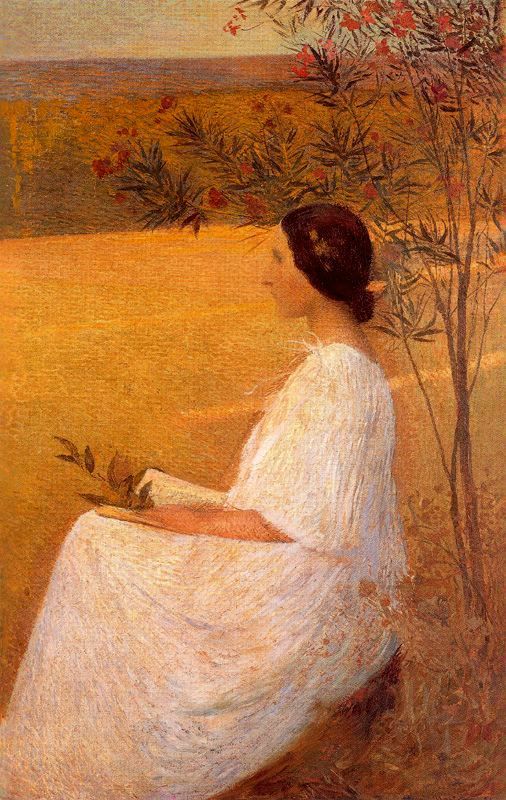 On our way, a jay flying past. Fly agaric mushrooms. Already in the village of Laren, nuthatch sounds.

We would see another bird; a kingfisher. However, it was a painted kingfisher, adding colour to a painting about the ancient Greek myth of Narcissus. That painting, in the Singer museum in Laren, was part of the exhibition there about French symbolist art.

What is symbolist art? The Wikipedia article about it uses a rather wide definition. It even includes Mexican painter Frida Kahlo; whom many analysts would think of as too remote from French 1890s symbolists, too remote geographically; in time; in world view; etc. Many painters at many times use symbols; however, I would not call all of them symbolists.

Neither does the exhibition at the Singer museum. It is limited to French artists, or (in works by Finnish or Polish, etc. artists) at least to artists working in France. The overwhelming majority of the paintings and, in smaller numbers, sculpture exhibited, is from the 1890s. This was the time when symbolists saw themselves as a movement with common aims, held joint exhibitions, etc. After symbolism became less of a recognizable movement as 1900 approached and passed, some of the artists continued to work in a symbolist vein, up to, and sometimes even during, World War I.

The symbolists opposed the somewhat earlier tendencies in art, like the realism of Gustave Courbet and the impressionism of Édouard Manet. They considered those tendencies to be “materialist”. To that “materialism” they opposed “the spiritual”. Some of them in the form of the doctrine of the biggest religion in France, Roman Catholicism. Some of them in other forms of religiosity, like spiritualism; Theosophy, or “Rosicrucianism” (a tendency claimed by its nineteenth century supporters to be as ancient as the Egyptian pharaohs or earlier; however, the word is from a seventeenth century Protestant hoax against the Roman papacy). Central in the organization of 1890s symbolist exhibitions was the occultist Joséphin Péladan, who defined the mission of symbolism as ‘to ruin realism‘. They claimed influences from antiquity, from the Middle Ages, the Renaissance, and, more recently, Richard Wagner, and the British Pre-Raphaelites.

The rejection of rival tendencies could go far. When, in 1892, Henri Martin painted his La Muse (at the Laren exhibition; see top of this blog entry) with a symbolist subject, but using neo-impressionist painting techniques, fellow symbolists did not like that.

Paradoxically, the idea of symbolists about themselves as an artistic movement, originated with their opponent Gustave Courbet. In 1855, Courbet wrote the Realist Manifesto, usually seen as the first manifesto of any artistic movement.

“Materialist” artists like Courbet and Manet tended to be on the political Left. Did the religious opposition to them by symbolists make those symbolists into political Rightists? No, according to the French collector of symbolist art, Ms Lucile Audouy, who named one symbolist, Alexandre Séon, whom she said was on the political Left. Links between artistic, social, and political views can indeed sometimes be complex; if one looks at the difference between Italian and Russian futurists.

The works at this exhibition are from the private collection of Ms Audouy.

It is questionable whether Ms Claudel fits in the symbolist category. The article Symbolism, Gender, And Sexuality says on symbolism and women:

Patricia Matthews argues that the masculinity of the intuitive artist-seer was ultimately protected by the exclusion of women from the category of genius. Like the primitives, women might experience intuition, spirituality, or a loss of the boundaries of self, but because they lacked genius, they would never be able to transform those experiences into an understanding of higher truths; nor could they communicate those truths through art. One rare exception to this general belief was the sculptor Camille Claudel, whose works were praised by several symbolist critics. Nevertheless, many of them still related the power of Claudel’s works to her instinctual femininity. Other successful women artists and writers were said to have lost some of their femininity in expressing their genius.

That some symbolists praised Ms Claudel does not make her a full-fledged member of that movement. The caption with her sculpture at the Singer museum exhibition says that the sculpture expresses feelings. However, like all painters using symbols are not symbolists, neither are all sculptors expressing feelings. 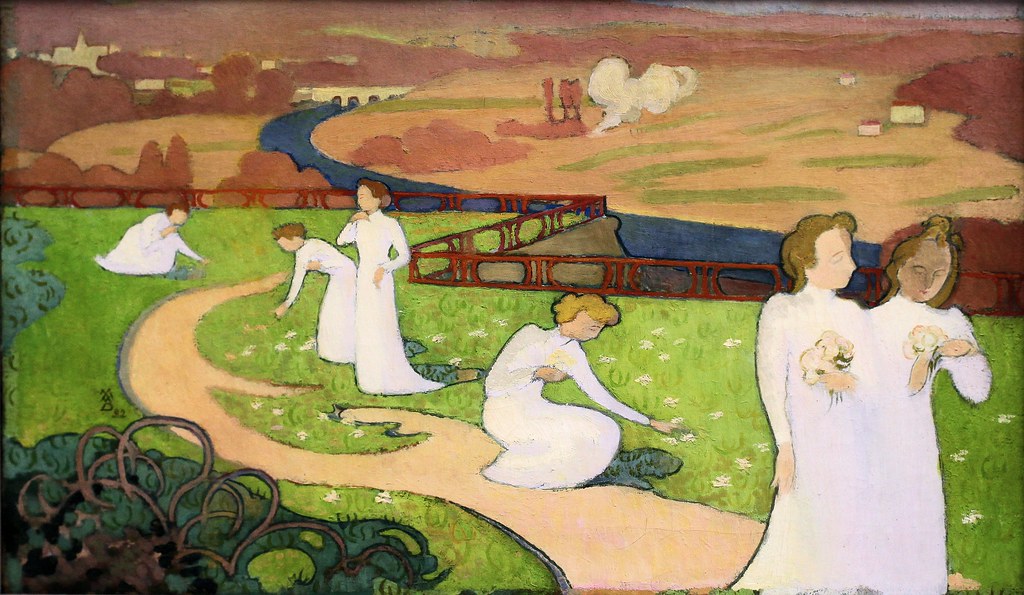 Woman is a ubiquitous subject in symbolist art and literature. Sometimes, as in Denis’s April or the early work of Piet Mondrian, she is a positive symbol of innocence and possibility—desexualized and dematerialized. In paintings by D. G. Rossetti or Whistler, woman is a highly aestheticized and unattainable love object. In his early work, the Russian artist Kazimir Malevich (1878–1935) used the motifs of women and embryos to express the notion that woman could be the incarnation of a higher, purer, more spontaneous realm. At other times, woman is turned into a sexualized femme fatale, as in Jean Delville’s Idol of Perversity or in the works of the Belgian graphic artist Félicien Rops or the German artist Franz von Stuck. Thus, much symbolist visual art reinforces and amplifies a long-standing dichotomy between woman as virgin and woman as whore.

There is a contrast here between the views on women between symbolists, and a realist like Gustave Courbet.

Courbet depicted women as attractive and sensual, even if they were not up to the classicist standards of beauty; as “flesh and blood” beings. While symbolists depicted women not as themselves, but as symbols of abstract ideas. As goddesses, demi-goddesses, angels, princesses, etc.

Judging from the Laren exhibition, maybe women are more present as depicted subjects in symbolism than in any other tendency in art. However, at that big exhibition in Laren, there were only two female symbolist painters represented: Jeanne Jacquemin, and Élisabeth Sonrel (often classified as Art Nouveau rather than symbolist). A minority, like in nearly all pre 1914 artistic tendencies (with the possible exception of Russian futurism).

At least one woman, well-known today, according to Madame Audouy, is influenced by symbolist art: Madonna, showing herself crucified Christ-like in her shows.

However, when, in 1916, symbolist Boleslas Biegas made a picture referring to the war and destruction then around him, called Le vampire glorieux, he depicted a female monster; even though World War one had been mainly caused by (some) men.

Van Gogh to Kandinsky: Symbolist Landscape in Europe 1880-1910 is on at the Scottish National Gallery, The Mound, Edinburgh EH2 2EL: here. That exhibition has a very wide, I’d say: too wide, definition of symbolism.

25 thoughts on “French symbolist art exhibition in the Netherlands”