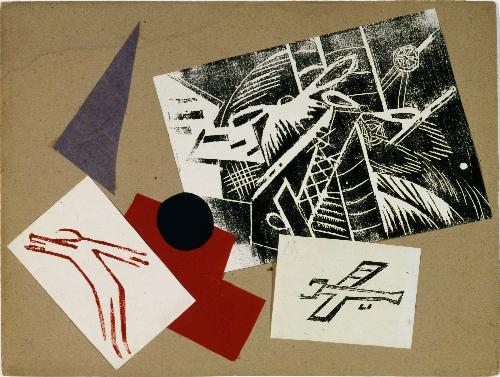 By Owen Hatherley in Britain:

Socialists have often felt rather uncomfortable with Futurism.

This Italian art movement, founded in 1909, sang the praises of new technology, aeroplanes and the mass media – but it also exalted war and colonialism.

Many of its leaders, such as Filippo Tommaso Marinetti, later became outspoken supporters of fascism.

The Marxist critic Walter Benjamin attacked Futurism in the 1930s, contrasting it to the Russian Constructivist art movement that allied itself with the October 1917 revolution.

The paradox, however, is that Russian Constructivism grew out of Italian Futurism – as this timely exhibition at the Estorick Collection gallery in north London demonstrates.

A Russian group of Futurist artists was formed around 1910.

Their first manifesto, A Slap in the Face of Public Taste, appeared in 1912 and was composed by the poet and painter Vladimir Mayakovsky, among others.

The Russian Futurists had much in common with the Italians – they too romanticised technology.

But there were differences from the start.

Paintings and book illustrations by Kasimir Malevich and Natalia Goncharova show the influence of Russian folk art, particularly the “lubok”, or woodcut.

Against the realist pretensions of bourgeois art, the Russians saw the future in schematic, distorted figures drawn by anonymous peasant artists.

It’s also notable, considering Marinetti’s inclusion of “scorn for woman” in his Futurist Manifesto, that nearly half the Russian Futurists were female – Varvara Stepanova, Olga Rozanova, Lyubov Popova and Natalia Goncharova being the most prominent.

Another difference is the harsh, clear lines that creep into the Russian images from around 1913 onwards.

The “metallisation of the human body” promised by the Italian Futurists saw its fulfilment more in Malevich’s robotic figures than in the soft pastel blur of Italian painters such as Gino Severini.

Popova’s painting Portrait (1915), with the word “futurismo” emblazoned across it, shows the mid-point between the two styles.

The Futurist theme of a collision between man and machine took on a very different significance after 1914.

Despite the death of their great sculptor Umberto Boccioni, they remained militaristic even after the war had ended.

The Russian response to the war was more ambiguous.

Initially Malevich and Mayakovsky (who had joined the Bolsheviks in 1908, but then drifted away from politics) designed propaganda posters with folksy representations of bayoneted Germans.

By 1915 Mayakovsky was roaring out anti-war poems like “You!”.

Then came the Bolshevik revolution of 1917. Mayakovsky wrote at the time, “October. To accept or not to accept?

For me, as for the other Moscow Futurists, this question never arose. It is my revolution.”