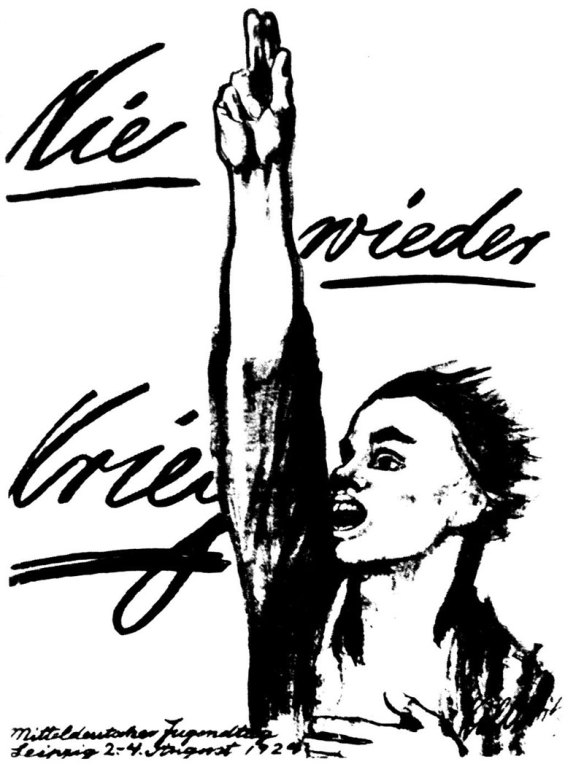 German artist Käthe Kollwitz, often included in the Expressionist movement, was born on 8 July 1867; in Königsberg (then in the German empire, today, Kaliningrad in Russia).

Her father had studied law.

However, being a non-conformist Protestant not belonging to the Lutheran state church, he was not allowed to be a lawyer.

Heinrich Marx had solved that by changing his religion from Judaism to official Protestantism in order to be able to practice his profession; his wife Henriette, whom he had married in the synagogue of Nijmegen in The Netherlands, never changed.

Which meant that he had to change his profession to mason.

Carl Schmidt supported his daughter when she wanted to become an artist.

In 1886, she saw paintings by Rubens in Munich, which impressed her much.

Next year, she became engaged to a member of Karl Marx’ party, the Social Democratic Party of Germany (banned by the government then). Her fiancé was the student of medicine, later doctor, Karl Kollwitz.

So did German playwright Gerhart Hauptmann. Hauptmann inspired her graphics on rebelling weavers.

Also after her marriage, she continued to sign her work with K(äthe) S(chmidt), as in the self-portrait from 1906 shown here.

They went to live in Berlin, where Karl became a doctor in a poor working class neighbourhood.

In 1898, the jury at an art exhibition wanted to honour Käthe with a medal, for her graphics on the weavers’ uprising.

However, Emperor Wilhelm II did not want any honours for this artist, rebellious in both form and subject.

In 1898, Käthe Kollwitz got permission to be a teacher at her old art school. It was a school for women only, who were taught separately from male students.

In 1899, she participated in the first ever exhibition of the “Berliner Secession“, for artists, hated by the emperor. Their non-conformism meant they were refused at official art exhibitions.

In 1904, she learned sculpture in Paris, visiting the workplaces of Auguste Rodin and others.

In 1906, she made a poster for an exhibition on house industries.

The Empress Auguste Viktoria refused to visit the exhibition because of who made the poster. Also because Kollwitz‘s poster showed a woman worker, clearly suffering from bad conditions.

Only after lots of paper and glue had removed Käthe’s posters from sight, Her Imperial Majesty visited the exhibition.

Next year, Kollwitz was in Florence in Italy. From there, she walked to Rome, reaching it after three weeks.

From 1908 to 1910, she worked for satirical magazine Simplizissimus, mocking in her caricatures the oppression of workers in Wilhelm II’s empire.

In 1912, she made a poster on the miserable housing situation in East Berlin.

The authorities banned it.

In 1913, there was a split in the “Berliner Secession” between old artistic vanguardists who had become sort of a new establishment themselves, and the rebels, who became the “Freie Secession”.

In the same year, she also joined the executive of the newly founded women artists’ association, as chair.

In the next year, the First World War broke out.

Also among many socialists, whose international congresses had decided that war should be fought by workers’ strikes, the wave of nationalist hysteria accompanying the outbreak of the war did have at least some effects.

Shortly afterward, he died at the front in Diksmuide in Belgium.

Then, Käthe Kollwitz decided to strongly oppose war, also in her artistic work.

The war was going badly for the German empire.

Like in the Bush empire concerning Iraq in 2007, some people, including Tony Blair, claimed “final victory” was still possible, with a final “surge“, some Germans then still proclaimed that the emperor’s armies would win.

Nobody should die any more.

Against [German militarist author] Richard Dehmel, I base myself on a greater [poet; meaning Goethe], who says: ‘You should not grind down seed bearing fruits’].

Now, on a much more dramatic scale than Kollwitz’ artistic home, the Secession, before the war, her political home, Social Democracy, split into Left and Right wings.

The Right wing allied itself with Rightist paramilitary groups, many of whom would later join Hitler’s nazi party, against the Left wing, which would become the Communist Party.

In 1919, the paramilitarists murdered Rosa Luxemburg and Karl Liebknecht, the Leftist leaders.

At the request of Liebknecht’s family, Käthe Kollwitz made his portrait in the mortuary.

In spite of sympathies, she never joined the Communist Party.

In 1924, ten years after the beginning of the war, at the request of the international trade union movement, she made her famous poster: The Survivors. Fight war, not wars.

One of the nazis’ first acts was to expel her from the Prussian Academy of Fine Arts.

No longer could she teach at the Academy, where she had been the first female professor.

The temporary bans on her work in Wilhelm II’s Second Empire became a permanent ban in Hitler’s Third Reich.

In 1936, the Moscow daily paper Isvestija interviewed Käthe Kollwitz on the reality under Hitler’s reign of terror.

When the nazis found out, she was immediately subjected to a Gestapo interrogation.

One more ‘false’ move, she was told, and off to a concentration camp with you.

Though it could not be exhibited, Käthe Kollwitz continued making anti militarist art until she died.

In 1937, Kollwitz’s work was included in the infamous Degenerate Art exhibition organized by the nazi regime.

In 1943, her house, with much of her work inside, and her son’s house were destroyed in the air war.

On 22 April 1945, just before liberation from Hitler, Käthe Kollwitz died.

In Cologne, there is the Käthe Kollwitz museum; where much of the information for this article comes from.

There is also a Käthe Kollwitz museum in Berlin.

“Every war already carries within it the war which will answer it.

Every war is answered by a new war, until everything, everything is smashed.

That is why I am wholeheartedly for a radical end to this madness, and why my only hope is in world socialism. … Pacifism simply is not a matter of calm[ly] looking on; it is work, hard work.”

“I am in the world to change the world.”

“One day, a new idea will arise and there will be an end to all wars. I die convinced of this. It will need much hard work, but it will be achieved.”

“Where do all the women who have watched so carefully over the lives of their beloved ones get the heroism to send them to face the cannon?

I am afraid that this soaring of the spirit will be followed by the blackest despair and dejection.

The task is to bear it not only during these few weeks, but for a long time – in dreary November as well, and also when spring comes again, in March, the month of young men who wanted to live and are dead.”