Raphael: The Lord of the Arts – Extended Theatrical Trailer

Raphael – the Lord of the Arts is the first film adaptation of the life and work of one of the most famous artists in the world, Raphael Sanzio. Few figures in the history of art have lived a life so full of intensity and fascination. He died young, aged 37, and yet managed to leave an indelible mark on the artistic world. In a well-balanced dialogue between historical reconstruction and expert commentary, the film retraces the most significant moments of Raphael’s life.

Set in 20 locations, two of which are major exclusives – the Vatican Logge and Cardinal Bibbiena’s apartment in the Apostolic Palace – the film explores more than 30 works of art, including the most famous and most representative of Raphael’s work. Beauty comes to life through the brushwork and enduring genius of one of the most talented artists the world has ever known.

Luca Viotto is the director of this film. The main roles are by Flavio Parenti as Raphael; Angela Curri as Margarita Luti, aka La Fornarina, Raphael’s model and lover; Enrico Lo Verso as Giovanni Santi, Raphael’s father, and Marco Cocci as Cardinal Pietro Bembo, whose portrait Raphael made.

On 19 August 2018, I went to see that film on Italian Raphael, 1483-1520. He was a painter´s son, making it easier to become a painter himself. Though his father died when he was only eleven years old.

Raphael is one of few painters whose name was incorporated in the name of an artistic movement. It was the 19th century British Pre-Raphaelite movement. That these British artists chose that name on the one hand shows that Raphael was famous, even more than three centuries after his death. On the other hand, it shows they did not want to emulate Raphael, but rather preferred earlier painters.

Young artists, opposed to the artistic establishment, founded the Pre-Raphaelite Brotherhood in 1848, a year of revolutions. Originally, they were a secret society.

Their inspiration was influential art critic John Ruskin. According to Ruskin, in medieval art truth prevailed, correctly, over beauty; and in most later art, beauty prevailed, wrongly, over truth. Ruskin wrote that Raphael was the prominent example of that change. Truth, he said, should become more important than beauty again: artists should once again become ‘Pre-Raphaelite’.

Meghan Trudell wrote on the Pre-Raphaelites:

The Pre-Raphaelites rejected academic artistic conventions, in particular the insistence that Italian Renaissance painting had set the standards for composition and subject matter in painting.

They denounced the Royal Academy as a reactionary institution and official art as conservative and pretentious, and called for a wide ranging artistic and moral renewal.

In particular, the Pre-Raphaelites looked back to the “primitivism” of Medieval painting. This was a move away from grandiose historical and religious subjects towards a more intimate style that emphasised emotion and literary themes.

Their contemporary Gustave Courbet, a French rebel against then predominant classicist and romantic art, went a step further, rejecting painting historical subjects. In 1848, he already painted in a new, realist, style. In 1855, Courbet wrote the manifesto of the new realist movement. Courbet´s example of artists naming their movements themselves, organizing exhibitions together, etc. became an example for later tendencies, even for opponents of realism like the, mainly French, symbolists.

Another issue with Meghan Trudell’s article is that Raphael is usually considered as, along with Leonardo da Vinci and Michelangelo, one of the three great artists marking the transition from High Renaissance to Mannerist art; not from Medieval to Renaissance art. Raphael was one of the first depicting emotions on human faces; paving the way from High Renaissance to Mannerism. So, when Meghan Trudell writes the Pre-Raphaelites wanted to ’emphasise emotion’ then they were arguably more ‘Raphaelite’ than ‘Pre-Raphaelite’.

Raphael, Leonardo and Michelangelo did not call themselves ‘Renaissance’ or ‘Mannerist’ artists. Art historians called them that after their deaths. Contrary to 19th century and later artists considering themselves realists, symbolists, futurists, dadaists, etc.

Raphael was one of the first artists to employ female models. He was also innovative otherwise: depicting emotions on human faces, as we wrote earlier. His strategy, the film says, was: learn from other master artists; try to equate them; then try to surpass them.

As the film shows, Raphael was born in Urbino, a small, but then artistically important town. He continued to bigger, still artistically more important, Florence. Finally, to Rome, where ‘Renaissance popes‘ could afford money for art.

This video is called Raphael’s Drawings.

In her review, Joyce Glasser calls it unfortunate that the film says nothing about the rivalry between Raphael and Michelangelo, while they both worked at the Vatican; a point about which Hudi Charin says in her review: ‘Raphael and Michelangelo’s relationship is almost entirely skipped over.’ The film suggests wrongly, according to Glasser, that Raphael became a universally beloved artist without any conflicts.

I would not say that the film says nothing at all about the Raphael-Michelangelo rivalry. But it hints at it rather than making it a central theme.

The film also shows Leonardo da Vinci unveiling his Mona Lisa in his workshop, with only Raphael being present. We don´t know whether that really happened, writes Ms Glasser. The problem with Raphael, like with many 16th century artists, is that we don’t have very many reliable biographical facts.

The good side of the film, Joyce Glasser says, is that it shows so many of Raphael´s works.

In partnership with the Vatican Museums, it provides us with incredible insights into rooms that are normally packed full of visitors. One of the most enchanting moments has to be in the Raphael Rooms.

As I saw in Rome only a few months ago, these rooms are always full of tourists, meaning you can never experience it fully. With steady camera-work Raphael takes us through each room, projecting the full journey the artist would have intended for his audience.

However, ´the names of the paintings and their locations, as well as proper names, are rattled off in Italian so that these citations are all but meaningless for the average viewer´, Joyce Glasser criticizes. That may be true for the version of the movie which Ms Glasser saw. However, not for the version which I saw: English spoken, Dutch subtitles.

One of the paintings in the film is the Madonna of the goldfinch.

Raphael also depicted bigger birds in his religious works; like the Eurasian cranes on the right here, in a tapestry design showing the Miraculous Draught of Fish. 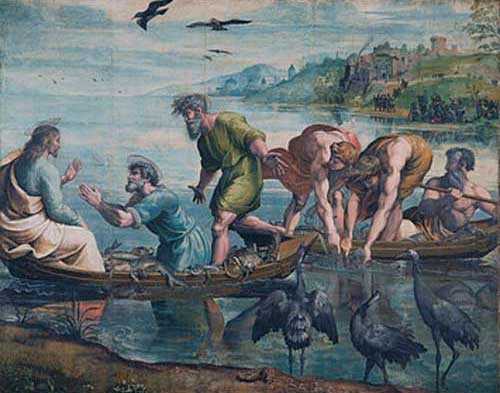 We are also told [in the film] Raphael was ground-breaking, and it is true that he was, but without comparisons with earlier Renaissance paintings, his mastery can not really be appreciated.

The same problem is seen in the Transfiguration analysis where the voice-over describes it as the best painting of Christ in the whole of art history, which is quite a claim without a comparison with any other paintings of the same subject.

The Transfiguration is said to be the last painting Raphael made before he died; probably of malaria.

The last scene of the film shows Raphael’s grave in the Pantheon. The Pantheon was the only ancient Roman building still standing in 16th century Rome. Originally a polytheist temple, it later became a church. During most of the film, we have seen churches and other buildings full of paintings. There are not any paintings in the Pantheon. Somewhat symbolic for the empty spot Raphael left behind by dying.

Director Luca Viotto died in February 2017, just before the première of his Raphael film. The very beginning of the film commemorates him.