Darwin’s “endless forms most beautiful and most wonderful”

The current Fitzwilliam Museum exhibition is a fascinating exploration of the impact of Charles Darwin’s revolutionary theories on art in the late 19th century. Endless Forms considers how Darwin’s ideas inspired visual imagery of the struggle for existence, of natural and sexual selection, the beauty of nature and the origin and descent of man.

The show’s 200 exhibits include paintings, drawings, prints, photographs, sculpture and fossils, many of which are on public display for the first time, including a small portrait of Darwin.

In 1828, Darwin started to train for the priesthood at Christ’s College in Cambridge, a centre of “natural theology,” which regarded the beauty and complexity of nature as evidence of God’s genius. Most people, including Darwin, subscribed to the biblical depiction of the origins of life on earth.

However, geological investigations and fossil discoveries were increasingly undermining biblical accounts of history. Charles Lyell’s Principles of Geology (1833) showed that the earth was much older than previously thought and that its surface, eroded by the elements, had been populated by long-extinct animals and plants. A new artistic vision emerged, which attempted to deal with the religious and philosophical consequences of the geological discoveries: for example, Robert Farren’s “An Earlier Dorset” (about 1850), the location of the famous Jurassic dinosaur-bearing cliffs.

“Pegwell Bay, a Recollection of October 5th 1858,” by William Dyce, a devout Anglican, shows the artist’s family gathering fossils washed from the chalk cliffs at the supposed site of the arrival of Christianity to Britain. Donati’s comet, which would not return to Earth for another 2,000 years, can just be made out in the centre of the picture. It is a truly melancholic questioning of man’s place in the universe at a time of great scientific change.

By the time Darwin had completed his five-year-long sea voyage on the Beagle in 1836, he had already begun to doubt the Bible. In 1850, he stopped going to church. In 1859, he published On the Origin of Species, in which he described the continual “struggle for existence” in nature. Any organism that happened to have advantageous characteristics would be more likely to triumph over its competitors and produce offspring. Such a discovery removed the need for design by an omnipotent deity.

Battles between animals had featured in art for thousands of years, but Darwin’s ideas gradually transformed the way artists pictured animals in their natural environment. Bruno Liljefors, known as the father of modern wildlife painting, tried to express the complex interactions between animals and plants in works such as the atmospheric “Mating of the Capercaillies” (1888).

The Fitzwilliam Museum exhibition also has a section devoted to the concept of “the survival of the fittest” and Victorian depictions of the homeless and hungry. Many sought to justify the capitalist status quo, but a few, however, like Hubert von Herkomer’s “On Strike” (1891), questioned this viewpoint. Darwin himself did not discuss the relevance of his ideas to areas outside of science, but he thought the “noble quality” of sympathy, the role of education and the pursuit of happiness were important factors in human society.

Darwin was convinced that humans had evolved from an ape-like ancestor, which he explored in The Descent of Man, and Selection in Relation to Sex (1871). Its publication dealt another blow to biblical accounts of the Garden of Eden and the story of Adam and Eve. The widely reproduced sculpture, “An Ape Contemplating a Skull,” (1892-93) by Hugo Rheinhold, showing a monkey seated on the Bible and a Darwin book, is a vivid depiction of the controversy that Darwin’s theory aroused. It counterposes ideas of evolution, intellect and enlightenment with loss of faith and religion (the sculpture has a phrase from the Genesis story where God forbids Eve to eat from the Tree of Knowledge, which would encourage humans to believe they were gods).

Notions about the ape-man and the “missing link” became extremely widespread in satirical and political publications. Darwin himself was famously caricatured as an ape, whilst Mr. G.O’Rilla featured as an Irish Fenian revolutionary.

The exhibition, to its credit, points out that Darwin was careful to distance himself from “social Darwinist” distortions of his ideas. And that amongst all the racial, nationalist and imperialist ideology there was a huge popular and genuine interest in many things foreign. This was expressed in the rapid growth of cheap carte-de-visite photographs that often depicted “native types” performing their “primitive” customs.

Darwin’s appreciation of the beauty of nature was evident from his youth and inspired his scientific studies, but it was only in The Descent of Man that he investigated the evolution of beauty, colour, music, scent and “antics.” In that book, he sought to answer the question, “Why so much beauty should be apparently created for such little purpose?”

The reason, Darwin explained, was that males often developed “secondary sexual characteristics,” unique to each species, which would make them more attractive to females, even though such obvious ornamentation such as the bird of paradise’s magnificent tail depicted by William Hart compromised their safety and survival. Although Darwin pointed out the roles were reversed in human society, as perceptive as ever, he added that it was wealth and social position that really determined the choice of mate.

Darwin’s research into the orchid, which had exploded in popularity in the 1830s and become a metaphor for God’s design, also showed that the flower’s exceptionally complex structures were products of natural selection, perfectly adapted to ensure the plant’s survival. He explained that the “final end of the whole flower … is the production of seed.”

This was heresy, according to the foremost Victorian art critic John Ruskin, who declared that “the flower exists for its own sake … not for the fruit’s sake.”

An element of desperation can be detected in Ruskin’s advice to younger readers of his wonderfully illustrated study of wayside flowers, Proserpina (1868), to avoid such questions as “how far flowers invite or require flies to interfere in their family affairs.” By 1875, Ruskin’s faith too had deserted him. 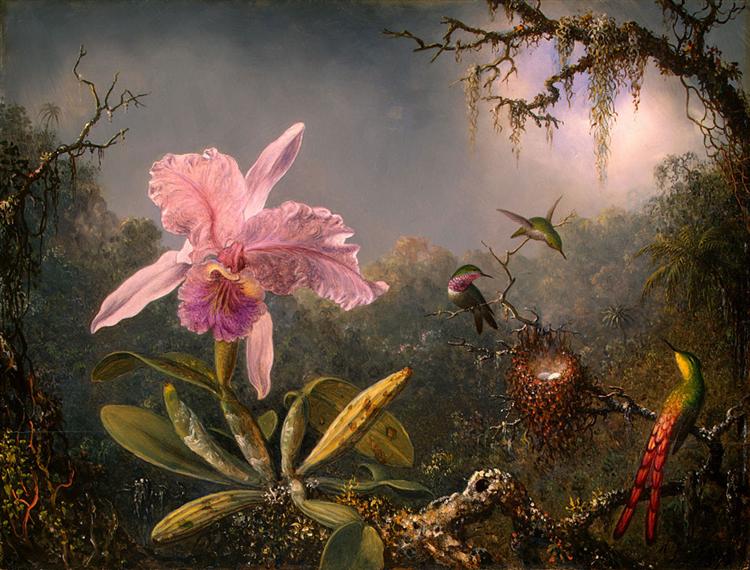 The painting “Cattleya Orchid and Three Hummingbirds” (1871), by Martin Johnson Heade, is a marvelous example of an artist’s attempt to deal with Darwin’s research into these questions.

The last section in the exhibition sets out to present “a radical interpretation” of the impact of Darwin’s theories on the group of Impressionist artists, many of whom were socialists, atheists and sympathetic to Darwinism.

One of Paul Cézanne’s closest friends was Antoine-Fortuné Marion, a painter who later became a paleontologist and one of France’s leading Darwinists. According to curator Jane Munro, Cézanne and Marion “would expound on the fossil finds and on Darwin at the foothills of Mont Sainte-Victoire, the place we all associate with Cézanne, so it seemed to me why not invite a rethinking about that picture in that context?”

Similarly, Claude Monet sought to paint “primal” landscapes such as the famous fossil cliffs at Etretat that Lyell had explored, which inspired the artist with “marvellous impressions of the world’s dawn, of time abandoned, the freshness of solitude, the torment of planetary dreams.”

Monet’s series of “Rouen Cathedral” paintings are done in a completely non-religious manner “ordered, and completed in an achieved evolution.”

Edgar Degas, too, took an interest in Darwinian theory and the influence of Darwin’s The Expression of the Emotions in Man and Animals (1872) can be seen in his sketchbooks. His “Little Dancer of 14 Years” is enclosed in a glass case at the Fitzwilliam, as it was at the sixth Impressionist exhibition in 1881, where it was criticized for its “bestial” look and startlingly “real” appearance—a product of “exact science.” Expression of the Emotions, which revealed Darwin’s belief in the kinship of animals and humans, also influenced artists such as Sir Edwin Landseer to produce images of animals as man’s best friend imbued with human qualities and virtues.

Endless Forms should not be missed. Its only fault is a tendency to find too much of a direct link between Darwin’s ideas and their influence on art—such as the claims that they inspired the fleshy eroticism of pre-Raphaelite artist Dante Gabriel Rossetti or the pornographic images of Félicien Rops.

One of the architects behind the unscientific intelligent design movement is finding success in referencing its greatest enemy: Charles Darwin: here.