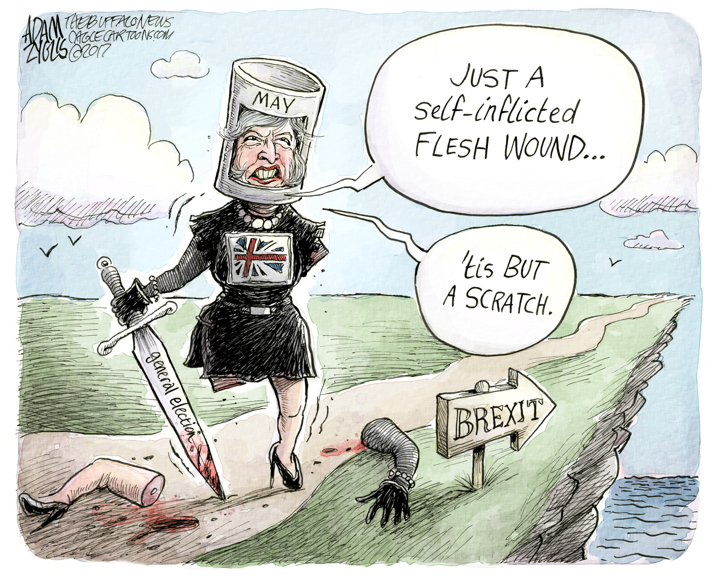 By Julie Hyland in Britain:

UK Prime Minister May calls for fight to “defeat socialism”

Prime Minister Theresa May pledged a renewed fight to “defeat socialism” before an audience of ultra-wealthy donors last week at the Conservative Party’s annual fundraising dinner.

Those arriving in chauffeur-driven Rolls Royces, Bentleys and Jaguars at the Black and White Ball, held in the Natural History Museum in London, paid £15,000 to get through the door.

‘Black and White Ball’: one wonders whether there was racist blackface performance, like in the Black and White Minstrel Show which used to be on British TV until 1978, and on stage until 1989.

It looks like the Presidents Club event for the same 1% also in London, which recently there was the scandal of waitresses being harassed sexually. One wonders whether something similar happened at the Black and White Ball.

Once inside, the multi-millionaires and billionaires were wined and dined in luxury, while competing for prizes that included the personal attention of the prime minister and leading members of her cabinet.

A day with May secured a winning bid of £55,000 from one unnamed donor. Dinner with Defence Secretary, Gavin Williamson, in the Churchill War Rooms in Westminster fetched £30,000 and a home-cooked dinner with Environment Secretary Michael Gove and his wife, Daily Mail columnist Sarah Vine, a distressingly low £12,500.

Smaller lots include a £1,000 gift voucher and private shopping experience at the prime minister’s favourite designer store Fluidity (although it admittedly will not buy much), and an original Labour isn’t Working 1979 campaign poster signed by Margaret Thatcher.

Bitter inner-party divisions that have seen May threatened with a leadership challenge were set aside for the evening. Leading advocates of a hard-Brexit lining up as possible replacements for May, Foreign Secretary Boris Johnson and Jacob Rees-Mogg, rubbed shoulders with Chancellor Philip Hammond, whose suggestion that the British government should minimise trade disruption with the European Union (EU) on exit led to demands for his head.

“We will raise our horizons beyond our near neighbours across the Pacific and Atlantic oceans to nations far and wide to broaden and deepen our trade and security relationships across the world”, she said.

Her paean to post-Brexit Britain’s glowing future stood in stark contrast to her presentation of global capitalism in grave peril:

“Around the world, we see a rise of populism, nationalism and protectionism. We see the great positive forces of free trade, economic liberalism and the rules-based order which sustains them under threat.”

There was no reference to the leading source of this instability in the shattering of the “rules-based order”—US imperialism—nor to the “terror threat”, which for almost two decades has been presented as the gravest challenge to British and international security.

Instead, almost 40 years after Thatcher vowed to “roll back the tide of socialism”, and more than 25 years since the liquidation of the Soviet Union was given as definitive proof of the triumph of capitalism, May declared the task at hand was a “renewed mission … to defeat socialism today as we have defeated it before.”

What accounts for this extraordinary statement?

May’s remarks were framed in opposition to Labour leader Jeremy Corbyn, who she attacked for “exploiting populist politics.” Asking rhetorically what Labour “offered” the UK, she replied, “Massive renationalisation. Capital flight. A run on the pound. That all leads to a bankrupt Britain.”

In truth it is the neo-liberal policies championed by Thatcher and deepened by her admirers in Tony Blair’s New Labour that have bankrupted Britain. After the criminal, anti-social activities of the financial speculators brought the economy to the brink of collapse in 2008, the resulting crisis was seized on by the powers-that-be to deepen their social counter-revolution against working people.

Welfare, health care, education and other vital provision have been gutted or privatised, so that millions can be left without jobs and any social support overnight. The last weeks alone have seen the collapse of Carillion, a major government contractor, jeopardising workers’ livelihoods and essential services. But worse is to follow. Every day the menace of a Third World War looms nearer.

In contrast, according to the Tory Spectator magazine, “Since the crash, the amount of wealth in Britain has risen by more than £4 trillion—almost half of which has accrued to the richest 10 percent of households. The prices of the assets typically owned by the ultra-rich has risen even faster. Vintage Ferraris have quadrupled in price, as have similar collectibles. This is the magic of quantitative easing: Bank of England figures suggest that it has increased the assets of the richest households by £125,000 while reducing the lot of the poorest by £300.”

The criminal consequence of this social plunder is horrifically displayed less than three miles away from the venue of the Tory Ball. Grenfell Tower, where at least 71 people died last June, lies in the same Royal Borough of Kensington and Chelsea—Britain’s wealthiest—as the Natural History Museum. Yet the two locales may as well be worlds apart. The tower’s burned out husk stands as a terrible symbol of social inequality and the contempt and indifference of the ruling elite for working people whose lives count for nothing.

Last week, Vietnamese-born Anh Nhu Nguyen was imprisoned for 21 months for falsely claiming that his wife and son had died in the Tower and claiming £12,500 in aid. Nguyen has a history of mental illness and a string of convictions. Yet none of those responsible for the fact that the Tower was enveloped in highly combustible material as a means of saving money have even been questioned, let alone charged. Eight months on, many of those affected and made homeless by the fire remain in temporary accommodation.

The bourgeoisie is aware of the massive and growing anger over these conditions. May referenced Corbyn as a representative of this developing social explosion. But the Labour leader is only a symptom … —not the cause.

A report by the right-wing Tory think tank, the Legatum Institute, in September found that voters wanted the “government to take a more socialist approach to economic policy by renationalising railways and utilities, while creating a wage cap for top earners…”

Some 83 percent of British voters would prefer public ownership of water companies over privatisation, 77 percent wanted the renationalisation of the electricity and gas companies and 76 percent favoured the renationalisation of the railways, it reported. Such left-wing sentiments find only a pale reflection in Corbyn’s cautious call, in response to the massive crisis in public services, to create a “mixed economy” fit for “the 21st century.”

As the Spectator itself commented on the contrasting fortunes of the super-rich and working people, “The craziness explains why 1970s-style socialism is making a comeback. It is a perfectly logical form of protest against an economy that has indeed been rigged in favour of those at the top.”

What are the implications of this state of affairs? This year is the bicentenary of the birth of Karl Marx. As David North wrote in the statement marking the anniversary, “The modern capitalist ruling elites have themselves become an absolute impediment to the progressive development of human society. The growth of their personal wealth has acquired a grimly metastatic character, which provokes popular revolution and portends the downfall of the system.”

May’s anti-socialist message was aimed at quickening the pulses of her ultra-rich audience, but it is one that feels itself under siege. They know the tide is turning and fear above all else that hostility to capitalism and growing sympathy for socialism portends an “immense intensification of social tensions and an escalation of class conflict around the world”. and with it their downfall.

Exclusive dinners with Tory ministers has created ‘a government for sale’. Labour’s Jon Trickett has accused the government of ‘undermining democracy’ afters reports of ministers being sold off at the Tories’ Black & White Ball in February: here.