On 18 October 2014, on the southern jetty of Scheveningen harbour, there were more birds than just ruddy turnstones. Like these two feral pigeons at the end of the jetty.

They had been ‘kissing’; unfortunately just before the photo.

This migrating northern wheatear standing on a rock.

Then, an even more special migratory bird: a short-eared owl passed the jetty!

Short-eared owls do fly over the sea sometimes: here.

Also, purple sandpipers on the jetty rocks. Some awake. 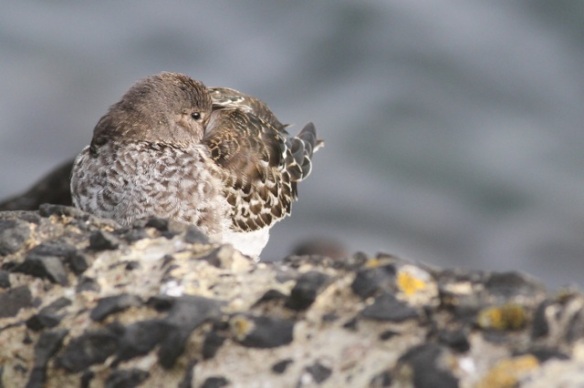 And some sleepy. About purple sandpipers: here.

We were back on the continent. Not far from the beginning of the jetty, this black redstart on concrete near a sand dune.

We went to the ‘Vulkaan‘ (the Volcano), a high sand dune south of The Hague. It is a good vantage point for seeing bird migration. The many birdwatchers present saw, eg, song thrushes and mistle thrushes fly past.